Video from Afghanistan and Iran 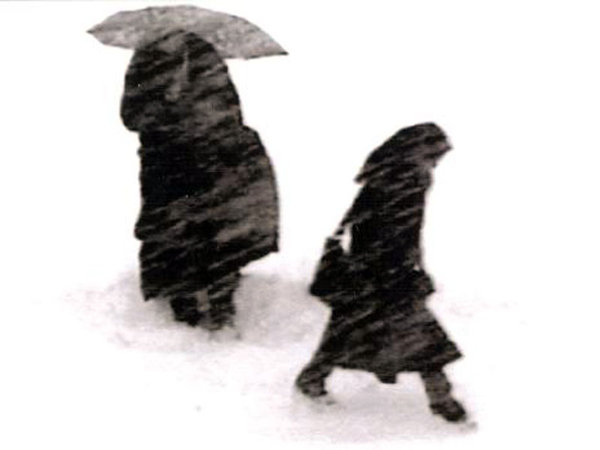 Omarzad played a key role in the establishment of the Center for Contemporary Art Afghanistan (CCAA). He is one of Afghanistan’s first avant-garde video artists and is an important figure in the young Kabul art scene.

“This film focuses on one of the principle debates about Afghan women, and it invites the viewer to think about logical solutions," Rahraw Omarzad said of The Third One, one of the films presented in Sight Unseen."In this film I start from yesterday and bring in a touch of today.”

Samadian, a highly acclaimed cinematographer, art director, and photographer, has worked with directors such as Martin Scorsese and Abbas Kiarostami. Samadian came to the forefront of contemporary Iranian video art during the Iran-Iraq war with his evocative work.

“The film is shot from my high-rise apartment building in Tehran," commented Samadian of his piece, The White Station. "It is an austere poetic statement, a filmic haiku which focuses on a lone woman in black chador in an unprecedented snowstorm that covers Teheran.”

Sight Unseen is made possible through the generous support of the Doris Duke Foundation for Islamic Art.

The Artists of Sight Unseen

Rahraw Omarzad
Rahraw Omarzad, born in 1964 in Kabul, is the Director of the Center for Contemporary Art Afghanistan (CCAA). He is also a lecturer at the Faculty of Fine Arts Kabul University and Editor-in-Chief of Gahnama-e-Hunar Art Magazine.

As a student at Kabul University, Omarzad studied drawing and painting at the Faculty of Fine Arts and began a career of teaching and lecturing shortly after his graduation. Omarzad has remained close to his roots in the arts and education, working as a lecturer in both Afghanistan and Pakistan. It was in Pakistan, where he found a group of likeminded expatriate Afghans devoted to dialogue and improvement of the arts, that he conceived of the publication Gahnama-e-Hunar.

The first issue appeared in 2000 with a circulation of 1,200 copies. The magazine has proved a breakthrough publication in the Afghan arts scene. Early issues focused on painting, sculpture and calligraphy and later, at the request of readers, expanded to cover film, theatre and music.

Today, Gahnama-e-Hunar publishes discussions on new curricula and other necessary changes for Afghanistan’s art schools, alongside reports on the growth of the nation’s cultural life, the reopening of the National Gallery, the search for national art treasures that have gone missing and the restoration of Afghan cultural heritage. International institutions and organizations now support the magazine.

In addition to his work as an editor, Omarzad continues to create his own video art and photography. Focused on themes of evolution, change and renewal in Afghanistan, his work has been heavily influenced by local street culture and urban exchanges in his native Kabul.

Seifollah Samadian
Born in Tehran in 1954, Seifollah Samadian is an accomplished Iranian artist, photographer and cinematographer. Highly-regarded internationally as an art director, Samadian has worked with directors like Martin Scorsese and Abbas Kiarostami. Samadian came to the forefront of critical attention in the Iranian the arts scene for his photographic work in the years following the end of the Iran-Iraq war in 1988.

Samadian later became Professor of Photojournalism at the University of Tehran and is today Publisher and Editor-in-Chief of the Iranian cultural magazine Tassvir.

In the contest of
Muslim Voices: Arts & Ideas—the largest, multi-venue celebration of Islamic cultures ever presented in the United States. The festival ran from June 5 - 14, 2009. http://muslimvoicesfestival.org