Walking in My Mind 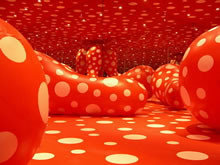 Over the last few summers, with major successes such as Antony Gormley: Blind Light (2007) and Psycho Buildings: Artists Take On Architecture (2008), the Hayward Gallery has established itself as a leading venue for curated experiential exhibitions, tailored to the Gallery’s unique spaces. Highlights of this year’s show include three works by iconic Japanese artist Yayoi Kusama, rarely exhibited in the UK, as she transforms the Gallery into a vision of her signature polka dots. Visitors are able to immerse themselves in Dots Obsession (2009), a large mirrored corridor filled with red spotty balloons, and walk through a dot-covered landscape on one of the outside sculpture terraces. Twenty-five trees along Queen’s Walk are also covered in red and white polka dots for the duration of the exhibition. Five of the ten artists in the exhibition have created new works, each presenting a different way in which artists construct images and installations that explore the mind. Turner-prize winner Keith Tyson is showing a new series of Studio Wall Drawings, including a gigantic composite image of a brain, while Charles Avery is presenting new drawings and sculptures as part of his ongoing The Islanders project. Two new sculptures by Dutch artist Mark Manders, who is exhibiting for the first time in a major London show, are on display. The exhibition also introduces visitors to new works by Chiharu Shiota and Bo Christian Larsson, two promising artists who have not been seen in a major UK exhibition before. Stephanie Rosenthal, Chief Curator of the Hayward Gallery, said:

‘Many artworks encourage the viewer to see the world through the artist’s eyes. The works in Walking in My Mind do more than this, as they pull the viewer into the unique worlds of ten major international artists who are explicitly preoccupied with their own minds and the creative process. The installations function as metaphors for the creative mind, inviting visitors to walk in and around the artists’ inner worlds translated into physical works of art.’

Since 2004, Charles Avery’s (b. 1973) work has focused on a single, epic project, The Islanders, an encyclopaedic investigation of an imaginary island and everything it contains, documented in text, paint and sculpture. For Walking in My Mind, Avery presents his tardis-like Eternity Chamber on one of the Gallery’s external sculpture terraces, as well as new drawings and sculptures of island creatures, inviting visitors to lose themselves in the artist’s imagination. Swiss artist Thomas Hirschhorn (b. 1957) has said of his art that he wants the visitor ‘to be inside a 24- hour brain in action’. He is represented by Cavemanman (2002), a sprawling complex of caves and linking tunnels made from cardboard and glossy brown parcel-tape. In each of the four caves, the visitor encounters an eclectic array of information, objects and images – from clocks showing the same time in different cities and foil-covered shop dummies, to gigantic books tied to sticks of dynamite and photocopied excerpts from philosophical writings. Iconic Japanese artist Yayoi Kusama’s (b.1929) work is characterised by compulsive iterations of certain motifs, such as polka dots and infinite nets, which the artist says are the result of hallucinations that she has experienced since childhood. Her installation Dots Obsession (2009), part of a series, immerses visitors in a large mirrored corridor filled with red spotty balloons, leading on to one of the outside sculpture courts, which is transformed with bright green Astroturf under foot and big red spotty skittle- shaped sculptures.

Visitors come face-to-face with the subconscious of Swedish artist Bo Christian Larsson (b. 1976) in a new sculptural environment taking up the entire staircase connecting the Hayward Gallery’s upper and lower galleries. Based in Germany and a rising figure on the continental art scene, this is the first opportunity visitors have to experience Larsson’s performance installation art in England. The starting- point for The first cut is the deepest and the division of seven is a performance during the preparation period of the exhibition, involving the artist and actors performing a cast of characters representing Larsson’s different persona, which form the basis of an eerie installation bedecked with trees and owls. In 1986, at the age of 18, Dutch artist Mark Manders (b. 1968) embarked on his ongoing project Self- portrait as a Building, which he describes as ‘a place where my thoughts are frozen together’. Exhibiting for the first time in a major London show, he is represented by six works from his project, including two new sculptures, each a fragment of the artist’s fictional self. Celebrated Japanese Pop artist Yoshitomo Nara (b. 1959) collaborates with creative design team graf to create wooden hut-like installations, one of which is on display. Intended as a recreation of the artist’s studio and representing a little hut atop a hill that Nara recalls from his childhood, these large uncanny structures incorporate Nara’s iconic and intriguing drawings of balloon-headed children, as well as various artist objects.

During his all too brief career, Jason Rhoades (1965 - 2006) achieved international notoriety for his immense, sprawling installations. He is represented by The Creation Myth (1998), an enormous assemblage of interconnected machines and everyday products, which ‘is about how one creates and how one sees the act of creation’, according to the artist’s thinking. Swiss artist Pipilotti Rist (b. 1962) is best known for her lush multimedia installations that playfully and provocatively merge fantasy and reality. This is the first opportunity for a UK audience to see Extremities (smooth, smooth) (1999), a film installation reconfigured for the Hayward exhibition, in which images of body parts – a gigantic foot, hand, breast, mouth and ear – float and dance in space, immersing the viewer’s own body with that of the artist’s work.

Chiharu Shiota (b.1972), a Japanese artist who has made Berlin her base since 1996, is known to enmesh mysterious and frightening objects – as various as dresses, burnt-out pianos, charred chairs and hospital beds – into intricate cocoons of black wool. Relating to dreams and childhood traumas, the threads serve to connect the artist’s memories and emotions, creating mindscapes that are full of physical and psychological tension, at once comforting and threatening. Shiota has taken part in many international group exhibitions, recently at the National Museum of Contemporary Art in Tokyo and the Museum of Contemporary Art Kiasma in Helsinki, and this is her first showing in the UK. Turner-prize winner Keith Tyson’s (b. 1969) interest in the creative process is demonstrated by his Studio Wall Drawings, an ongoing series of complex works on paper which record the artist’s thought process and working practice. Occupying three walls, Tyson’s new series of drawings includes a gigantic composite image of a brain, set within a landscape. The installation also features a sculpture representing the artist as a young boy and is accompanied by sound pieces explaining each work as it is made.

Catalogue The exhibition is accompanied by a fully illustrated catalogue produced by Hayward Publishing, featuring essays by Stephanie Rosenthal, Mami Kataoka, Brian Dillon and Dr. Susan Blackmore. Exhibition price: £19.99. ISBN: 978-1-85332-277-8. The catalogue features photography of all the installations in the exhibition.

To accompany the exhibition, the Hayward Gallery has programmed a series of events and lectures that complement and further explore the theme of the exhibition:

Sunday 21 June, 4pm
St Paul’s Roof Pavilion
WALKING IN MY MIND: THE PRELUDE
Curators Mami Kataoka and Stephanie Rosenthal discuss themes and works featured in the exhibition with several of the participating artists. £5