Consider the Lobster / And Other Essays 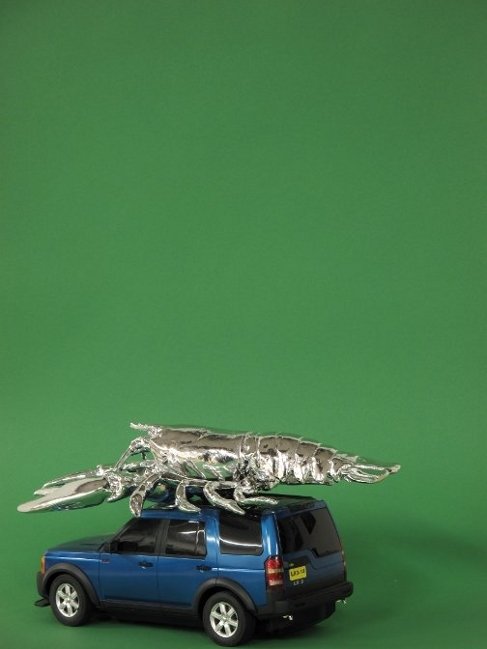 This summer, the Center for Curatorial Studies and Hessel Museum of Art at Bard College (CCS Bard) presents a twofold project by the New York-based artist Rachel Harrison. In the CCS Bard Galleries, Consider the Lobster, the first major comprehensive Rachel Harrison survey exhibition encompasses more than 10 years of work. In And Other Essays, Harrison collaborates with six invited artists—including Nayland Blake, Tom Burr, Harry Dodge, Alix Lambert, Allen Ruppersberg, and Andrea Zittel—to reinstall works from the Marieluise Hessel Collection in the Hessel Museum of Art. Both exhibitions are on view from June 27 through December 20, 2009.

Consider the Lobster features Harrison’s large-scale installations, all of which have been reconfigured and transformed for the CCS Bard galleries, including an architectural intervention that takes and breaks the walls of the gallery and utilizes their fragments for the structure of a new exhibition. Consider the Lobster begins with a reconsideration of Harrison’s early installation, Snake in the Grass (1997), and presents transformations of other installations including Perth Amboy (2001) and Car Stereo Parkway (2005). The exhibition also presents a number of her autonomous sculptural and photographic works, including a new sculptural piece, Green Beans (2009).

In addition to the interior galleries, Harrison has taken the idea of the museum as a platform, or pedestal for art, further by reinstalling Franz West’s light blue Couch (2004) on the roof of the Hessel Museum. On the lawn in front of the museum, Harrison tops the two truncheon-like protrusions of West’s Mercury (2004) with specially made wigs, a characteristic juxtaposition for Harrison and a playful nod to an artistic figure with whom she is often compared.

Rachel Harrison’s intervention on the West sculptures is resonant of many of the artist’s sculptural strategies. Her sculptures (often perched atop painted pedestals) are coated with a signature pearlescent paint, on top of which she posts photographs, inserts video monitors, or effortlessly drops found objects to create a multivalent rebus, challenging the viewer to connect apparently disparate clues. In this she has bridged the divisions of sculpture, photography, painting, video, and installation. She does so with a canny wit and a taste for irony. Her oeuvre of sculptural works offers a panoply of fallen American icons and Hollywood stars.

The titles for the solo exhibition, Consider the Lobster, and its companion group project, And Other Essays, are drawn from the late David Foster Wallace’s collection of essays (Consider the Lobster And Other Essays, Little, Brown and Company, 2005). And Other Essays expands Harrison’s exploration of exhibition-making by inviting a number of colleagues from different generations to select and rehang the center’s contemporary art collection. Like Harrison’s work itself, this multifaceted project suggests there is no one, true methodology for looking at art or one uniform principle to curating an exhibition. The exhibition will present over 160 works by more than 88 artists.

This exhibition is organized by Tom Eccles, Executive Director, Center for Curatorial Studies and Hessel Museum of Art. Consider the Lobster and And Other Essays at CCS Bard are made possible with support from the Andy Warhol Foundation for the Visual Arts, the Audrey and Sydney Irmas Charitable Foundation, The Marieluise Hessel Foundation, the Robert Mapplethorpe Foundation, Greene Naftali Gallery, Alexander S. C. Rower, the Board of Governors of the Center for Curatorial Studies, and the Center’s Patrons, Supporters, and Friends.

Consider the Lobster will be on view at the Whitechapel Gallery, London, from April 27-June 20, 2010.
Center for Curatorial Studies and Hessel Museum of Art

The Center for Curatorial Studies at Bard College (CCS Bard) is an exhibition, education, and research center dedicated to the study of art and curatorial practices from the 1960s to the present day. In addition to the CCS Bard Galleries and the newly inaugurated Hessel Museum of Art, CCS Bard houses the Marieluise Hessel Collection of more than 2,000 contemporary works, as well as an extensive library and curatorial archives that are accessible to the general public. The Center’s two-year graduate program in curatorial studies is specifically designed to deepen students’ understanding of the intellectual and practical tasks of curating contemporary art. Exhibitions are presented year-round in the CCS Bard Galleries and Hessel Museum of Art, providing students with the opportunity to work with world-renowned artists and curators. The exhibition program and collection also serve as the basis for a wide range of public programs and activities exploring art and its role in contemporary society.