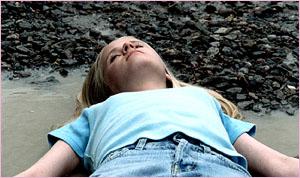 Ahtila has described her work as 'human dramas', fictional narratives that emerge from lengthy periods of research as well as from her own observations and experiences. The process of emotional reconciliation is a recurrent motif: her characters move between past and present without relying on a conventional cinematic 'flashback'. In recent work, the border between 'self' and 'other' is investigated as the viewer is invited to peer inside the minds of individuals caught in moments of psychological fragility.

Above all, Ahtila is concerned with the language of film-making. There are three elements that she views as central to her work: the way images are constructed, the way narrative unfolds, and the physical space in which the work is encountered. She is interested in how film and video are absorbed into our everyday worlds, and many of her works adopt the techniques of contemporary media, from music videos, commercials, cinema trailers to documentary film.

The treatment of colour in the films is particularly painterly, while her approach to the display of the works is deliberate and considered. Some of the films are shown on multiple screens, or within complex installations that require the viewer to navigate their way through the space. Others are as likely to be encountered in a cinema or on television as in a gallery setting.

Eija-Liisa Ahtila was born in Hameenlinna, Finland in 1959, and lives and works in Helsinki.

Eija-Liisa Ahtila: real characters, invented worlds is organised in collaboration with Kiasma Museum of Contemporary Art, Helsinki. The Tate Modern presentation is curated by Susan May.

Thanks to The Finnish Institute, London, The Embassy of Finland, London and Artsworld Digital Channel. Paper donated by UPM Kymmene.

Artsworld information
Excerpts from The Present will be shown on the digital channel Artsworld during commercial breaks from 24 April - 8 May. It will culminate with the transmission of the full length version, Love is a Treasure, on 8 May at 21.55, with an additional screening on 2 June at 21.30.