From the collection of the Islamic Arts Museum Malaysia. The exhibition displays 50 exotic and colourful robes and textiles, wall coverings and jewellery, mainly from Uzbekistan. 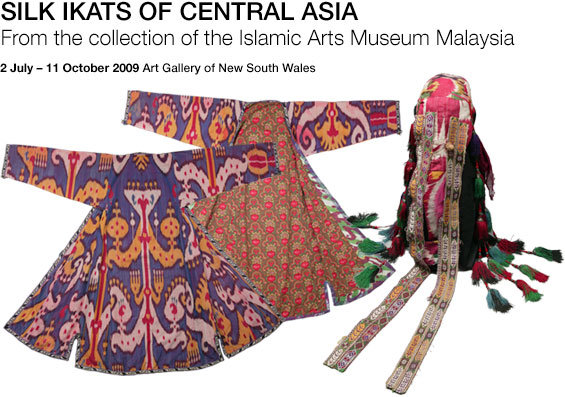 Silk Ikats of Central Asia will display 50 exotic and colourful robes and textiles, wall coverings and jewellery, mainly from Uzbekistan, a land of nearly 30 million people.Central Asian ikats were almost unknown to the rest of the world until as recently as 20 years ago.

While often the term ikat, derived from the Malay word for ‘to tie’ or ‘to bind’, is used to refer to the actual process, in Central Asia the Persian term abrbandi (literally cloud (abr) tying (band)) is used. The dyeing and binding processes used to create ikats are complex, so the more colours and the more complex the patterns, the more admired the ikat.

The rich colours are obtained from natural resources: yellow comes from saffron, black from the skins of pomegranates; red from crushed cochineal insects, and indigo from the indigo plant imported from India. While the origin of the technique of ikat dyeing is uncertain, we know it was practised in China, India, and Eygpt by at least the 7th century.

Central Asia has always played a crucial role in east-west exchange because of the famous Silk Road that passed through its numerous cities. Silk Road trade brought great wealth to Central Asia, with textile production a major industry. The people of Central Asia have lived a turbulent history: in the 8th century they were conquered by Arabs who brought with them Islam which has been the major religion ever since. Later in the 13th and 14th century the Mongols came, and then from the mid 19th century it was Russia.

Central Asian ikats became more widespread from the early 19th century until the first decade of the 20th century with Bukhara, one of the most ancient cities of Uzbekistan, the centre for the various workshops for weavers, dyers, designers, as well as a wealthy upper class who could afford the textiles. The most valued cloths were of silk, the next most valued a mix of silk and cotton. Most of the ikats in this exhibition belong to the 19th century. While silk production was for centuries the closely guarded secret of China, by the 19th century, Central Asian workshops could also produce silk.

In Central Asia, robes were highly esteemed icons of status, used as gifts to thank or honour guests. The quality of the textile signified the status of the recipient. Ikat robes were worn by both men and women, although women were restricted to displaying theirs indoors. The higher the quality of silk and the more complex the dyeing, the more valued the robe which served as a status symbol amongst rich merchants who might wear up to ten layers of robes as flamboyant symbols of wealth and status. While most designs are dramatically abstract, some contain motifs such as the tree of life, ram horns or scorpions. Ikats were made for daily wear, used in dowries, at weddings, and to wrap new-born babies. Bright patches of ikat weaving were also used as wall hangings to ornament private homes.

Ikats continue to be admired; inspiring contemporary designers such as Oscar de la Renta who first used the fabric in 2005.