Audible Silence. Thirty paintings, sculptures, and drawings-the Daros holdings are supplementes by six works on loan from the Kunsthaus ZÃ¼rich and from a Swiss privat collection-offer a representative survey of the oeuvre of this American artist, whose creative singularity moves within the framework of classical artistic categories. 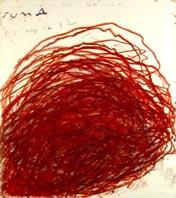 The first monographic presentation in the galleries of Daros Exhibitions is devoted to Cy Twombly. Thirty paintings, sculptures, and drawings-the Daros holdings are supplementes by six works on loan from the Kunsthaus ZÃ¼rich and from a Swiss privat collection-offer a representative survey of the oeuvre of this American artist, whose creative singularity moves within the framework of classical artistic categories. Twombly was born in Lexington, Virginia, in 1928 and concluded his art studies at Black Mountain College (North Carolina). In 1952 he went to Europe on a grant, where he stayed in Rome for some time before traveling extensively in Italy and North Africa with Robert Rauschenberg.

The exhibition's opening group of two- and three-dimensional works of the forties and fifties reflects Twombly's study of Abstract Expressionism, demonstrates his interest in myths, and documents the evolution of his drawing style. The large-format Panorama of 1955 does justice to its title inasmuch as it might be said to anticipate the artist's future concerns: the reversal of the relationship of light and dark, the treatment of movement and space, and "the physical act of handwriting" (Robert Pincus-Witten).

In 1957, after a four-year absence, Twombly returned to Mediterranean Rome, which became his residence of choice. In Arcadia 1958, the canvas is transformed into the page of a poetic diary: he sketches what he has seen, notes down what he has experienced, and gives shape to the unwritten. 1959 was a turning point. What he once called the "symbolic whiteness of MallarmÃ©" characterizes his sparing, silent painting, Untitled, Lexington. The white visibly alters the painterly quality of his art as he begins to work in oils, as in Untitled, Roma 1955, because the properties of oil paints are entirely different from house paint. This painting also shows the numbers and signs that will later form Twombly's specific vocabulary.

By 1961, the sensual spontaneity and physical immediacy of his art were in full flower as shown in the intense coloring of his pictures from that time. "The Eros signs are rampant and acquire a mythical plenty (Franz Meyer)." The midsummer sultriness and the vibrant desire of the Ferragosto series is followed by the study of a profoundly tragic love story: Hero and Leander, 1962. Here we experience the artistic process, described by Twombly as the "compulsive action of becoming; the direct and indirect pressures brought to a climax in the acute act of forming."

In the mid-sixties, his explosive painting gave way to a conceptual imagery and a reduced use of color. He returned once more to his white painting on a dark ground of 1955 as well as the exploration of movement and space or of space and time. In Untitled, 1971, Twombly produced a large "blackboard-writing picture" (Franz Meyer), characterized largely by a high degree of reduction. The horizontal lines in the lower half of the picture are rhythmically interrupted by deliberately placed, short verticals. Time slows down, the large plane of the picture is translated into the space of a landscape and time into a river.

About a decade later, landscape and flow were formulated in both naturalistic and mythological terms in the four-part painting Hero and Leandro, 1981-1984. The narrative sequence speaks of fateful love and its tragic consequences. Formally it is visualized in a return to the painterly intensity of the early sixties and a heightened material density.

In the eighties, drawings on paper in strong colors and sculptures acquired greater significance. The artist's passion for Mediterranean myths is complemented with a growing passion for the East. In the drawing Suma of 1982, the latter finds expression in Buddhist quotations, while the rigorously stylized form of Rotalla, 1990, might be interpreted as the seated Buddha. During the same period, flowers begin to appear more frequently as well, symbolizing joy, youth, and transience. Twombly chooses vegetable forms for both the monumental sculpture Untitled, 1983, and for Carnations, 1989, a suite of seven drawings. The technique used in Carnations-watercolor and colored chalk on firm handmade paper-lends the work great expressive immediacy while its conception as a suite underscores the aspect of movement and change.

After a chronological overture in the first room, works of the sixties and eighties are shown together in the second, larger gallery. The more intimate third gallery is reserved for reduced, minimal works. Viewers who immerse themselves in Cy Twombly's universe will realize that his works touch the very core of being. He is sidetracked neither by subjectivity nor by generalization because he not only makes note of what he has experienced and seen but also sketches that which is not yet accessible. The artist lays the groundwork for us in his formal and substantive sensitivity and the poetry of his language. His art is audible but can neither be grasped nor deciphered. Instead it evokes a curious stillness, a specific latency, which provides a springboard for adequate reception-a reception that challenges our senses, and activates and sensitizes our perception.