A retrospective on the occasion of the seventy-fifth anniversary of Holzel's death. His new paintings recall a kaleidoscope in which the artist let the variety of colors and forms in the picture form a unity. The artist's ideas on art - transmitted by the master's students Johannes Itten and Oskar Schlemmer at the Bauhaus as well as Willi Baumeister - became the theoretical basis of modernism for future generations. 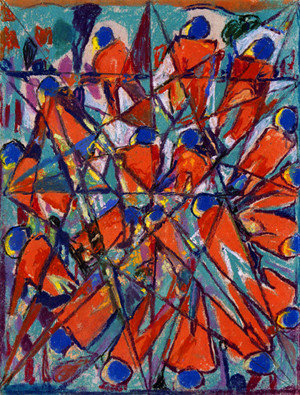 With Adolf Hölzel a new chapter begins in modern painting. The artist, who was born in 1853 in Olmütz (Moravia) and died in Stuttgart in 1934, moved to the regional capital and royal residence in 1905 and sought a very independent path in developing modern pictures. Hölzel’s exertions went largely unnoticed by his colleagues although he was greatly esteemed by his students. His achievements unfolded simulta- neously with other comparable movements in art that were taking place in Europe: those pursued by Wassily Kandinsky, Piet Mondrian, Robert Delaunay, or Franticek Kupka. There has been a repeated call for rediscovering this epoch-making oeuvre, of which the Kunstmuseum Stuttgart, with almost 400 pieces, houses the largest collection worldwide. The year 2009 is the 75th anniversary of Adolf Hölzel’s death. On this occasion, the Kunstmuseum Stuttgart, together with the Kunstforum Ostdeutsche Galerie Regensburg, is organizing the most comprehensive exhibition of this artist’s oeuvre yet.

In 1887 after studying in Vienna and Munich, the Stuttgart avant-gardist moved to Dachau near Mu- nich. With friends he there founded the "New Dachau" group. In 1905, the painter and draftsman – who, after 1899, for aesthetic reasons signed his works with "A. HOELZEL" – was appointed pro- fessor at the Stuttgart art academy, the Königlich Württembergische Akademie. Over 50 years old, it was in Stuttgart that the artist pursued his very own path in the development of the modern pic- ture. He had brought his "Komposition in Rot I" (Composition in Red I) along with him from Dachau, where he had painted the work. It is regarded as one of the earliest examples of abstract painting. Hölzel – way ahead of his time – presented the work to the public for the first time in an exhibition in Freiburg in 1916. His artistic goal was not so much to achieve total nonrepresentational art, but rather to comply with the real nature of the painting as "a surface covered with color" (Maurice Denis). In Adolf Hölzel’s time great significance was attached to the difference between abstract and representational painting. Looking back, this makes his position appear especially viable for the fu- ture and underscores his exceptionality in the circle of the avant-garde.