Interventions on the frontier between the Canary Islands and Africa 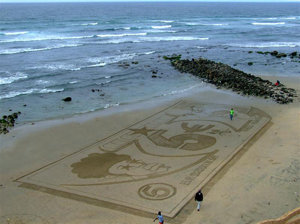 The artistic collective "elojodearena" (theeyeofsand), with the support of Casa África and the CAAM, presents the project Mareas Migratorias (Migratory Tides), a new way of seeing the phenomenon of clandestine migration between Africa and the Canary Islands.
The results of this project are displayed in a video documentary produced for the exhibition in the CAAM's Balcones 9 spaces.

When Gaston Bachelard wrote The Poetics of Space, he asked that we take images "as sudden events in life", precisely because "when the image is new, the world is new". Today, more than ever, the new image must be taken with a full moral and political conscience.

Mareas Migratorias emerged from the need to find a new way of looking at the phenomenon of clandestine migration, in this case from Africa to the Canary Islands. It is about getting to the bottom of the power and influence of "the image" in the migratory movement. Mareas Migratorias “speaks without words” and borrows the rhythm of the tide to make visible and decipher the imagination of young Africans.

Óscar Rodríguez has brought forth the new image by means of large-scale drawings made on the sand of the beach. This is the last surface that the emigrants tread before embarking on the journey to their European dream, and it is also the first they tread when they arrive here, those of them who make it.

The drawings are made during the full moon, and take advantage of the longest tides, with the space in which the image is born borrowed from the sea. The migratory movements, just like the tide itself, are incessant. This activity takes place in the frontier space between Africa and the Canary Islands. On both sides of this frontier, “elojodearena” proposed the same task to Senegalese children and young people: "Draw what you imagine Europe to be". The new image can be seen only because the rhythm of the tide allows it. And at the same time as that which they imagine Europe to be emerges, the sea shows us with its waves that the destruction of the image of the dominant world is possible.

The body has got the power to bulid, perform and run data or guidelines of the image.
Paracelso: “Invisible deseases”

“Migratory Tides” basically pretends to “speak” with no words about the power of the image, and it’s influence above the underground migration in general and from Africa to Canarias particularly. Actually the televisión cameras and press photographs expose this problem with more dirty interest than a productive one wich decipher the reallity that leads. Towards this problem of look and images construction “elojodearena” has implemented the good custom of distance, Oscar has created a way to get a higher point of view as a way to see even more clearly the problems. The point of view of the migratory tides is aerial literally and practic.

We have suggested to the own africansto make an ilustration at big schale on the sand of the beach designed by themselves to be seen and filmed from the sky and above the space on the beach which “provides” the low tide in full moon phase.
Thereby the images are being erased when the sea level increase. It cause the necesary destruction of an imaginary which movement is unstoppable. Because migration is like a drawing in which thousands of people who move from place to place, modify with the transfer our countrys’ surfaces. If we could have a look above which stops in time, surely we’d see roads drawn along land and sea.

When we arrived to Senegal we had to find people who were interested on talking though images about migration, and also the beach and sand had to be perfect for the project. That was found right at the north-east of Dakar, near the airport. It was hard to find the final image for the project, after trying to agree with different local asociations, we decided that the best place where we could find a good image was at colleges, with children and young people, potencial migrants of one of the most affected neighbourhoods of Dakar by the problem of undreground migration: Thiaroye-sur-Mer and M’Bao. That way, we got to the yet clean and sincere looks full of images taken on it’s mayority from televisión, who answered to the slogan “ draw what you think Europe is”
So we left the center of the capital and moved to this neighbourhoods.
Thiaroye and M’Bao are crowded villages of Dakar, as they are on the shores they suffer most severe problemas of migration.and poverty. To get there it’s necesary to go through the daily traffic jam of the autoroute that “joins” Dakar with the rest of Senegal. It’s important to say it, there’s no chance. The movement from place to place is such problematic, that we may think that people live stressed and they always have a bad mood, nevertheless, people there smile vividly. There are thousands of peddlers, who look for survivance along the autoroute, plenty options of taxis, ilegal taxi “clando”, cars with five lines which had been added onther one”sept-places”, minibuses to which is hard to get in “Djakan Jay”, also there are a lot of gorgeous cars compared to others that look very old and hopeless, motorcicles,very few bicycles, and several people going by foot. The transfer from Dakar to Thiaroye made us think about the importance of the way.
Being on Thiaroye and M’Bao we visited four schools whit the new member of the group “elojodearena” Djibril Drame, in each school we talked to principals and professors, we introduced them the project of “migratory tides” soem of them seemed to agree with the project and we were filled with their wishdom, adopted the proyect as their own and involved their students. We asked them to help us by letting us some time of the class to proceed whit the project (students between 10 and 20 years old). We asked each group to draw in blank postcards images wich answered the question “what do you think Europe is?”, cause we believe images are the main thing that drives migration.
During the days we lived in Thiaroye and M’Bao, we tood the autoroute at least twice a day to get to the schools, and that made us think about the importance of the roads, streets, highways, because they let us move and comunicate more or less fast, just in time or not.
We are not surprised by the drawings from different schools in which “larout” appears frequently(the street,route,way of comunication) related to Europe. From that we can ask ourselves the importance of the way and the movement.
We’d had to wonder why a good highway is not a reality in Africa. It would have to be transalted the problema of the “autoroute”(highway) in movility and comunication terms. We’d have to talk about a serious problem in freedom terms, and freedom as a drive to migration.
Migratory tides wants to talk from the shore of the beach, for many reasons,one of them, an importat one, the route of migration from Africa to Canarias take place seaward. An others look can take a look and spy on. Also becasuse the beach is the surface inmigrants step on for the last time before trying to achieve the dream of Europe, the ones who luckly reach the coast.