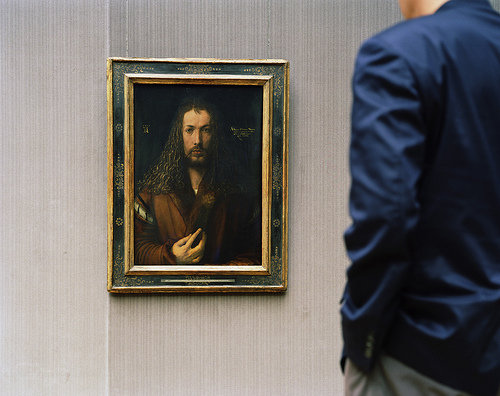 The Museum of Cycladic Art is proud to host the first solo exhibition in a museum in Greece, by the internationally acclaimed German photographer Thomas Struth in The Stathatos Mansion. The exhibition will consist of a total of 29 works ranging from his whole body of work.

The exhibition includes photographs from his Streets and Landscape series, the Paradise series, and the acclaimed Museums and Chapels series. The Streets in the 70s with the black and white, small scale frontal, precise and objective photographs of deserted streets in Europe and America, is a series Struth worked on after studying at the Dusseldorf Academy with the Bechers. The exhibition includes a whole range of works like Dusseldorf, 1979, Corso Vittorio Emanuelle, Naples, 1988 and works from Struth's later cityscapes, where the viewer is confronted with an architectural scenery that in contrast to earlier work, is in large format, in colour and different moods are present like in the clear daylight of Avenida Tiradentes, Sao Paulo, 2001, and the hazy Nanjing XI LU, Shanghai, 1997. From the Paradise series, that consist of large format delicately detailed pictures of dense forests in Brazil, Japan, China, Australia, and Germany, the show includes a range from Paradise 01, Australia, 1998 to Paradise 26, Bougainville, Peru, 2003. And from the well-known large scale Museums and Chapels series, consisting of large-format colour photographs taken in the world's greatest museums and churches, of the anonymous audience admiring the masterpieces of the history of Western art, the exhibition contains the works like the well known Mailander Dom (Fassade), 1998; Mailand: San Zaccaria, Venice, 1995; Pergamon Museum, Berlin, 2003, among others.

Between June 2010 and 2012, a major retrospective exhibition of Struth's work will be shown at the Kunsthaus Zürich, the K20, Düsseldorf, Whitechapel Gallery, London and other venues.

Thomas Struth was born in 1954 in Geldern, Germany and now lives in Dusseldorf and Berlin.

Organisation
The exhibition is organised by the Museum of Cycladic Art in collaboration with the German Embassy in Athens, the Goethe-Institut Athen and Marian Goodman Gallery.

The exhibition is part of the program of parallel events for the 2nd Athens Biennale, Heaven.

Until 30 September 2009
The DESTE Prize 2009
The DESTE Prize was established in 1999 and is awarded every two years to a Greek artist living in Greece or abroad. The Prize aims to showcase the work of a new and emerging generation of artists and it is an integral part of the Foundation’s policy for supporting and promoting contemporary art in Greece.
The six shortlisted artists for the DESTE Prize 2009 – Athanasios Argianas, Eirene Efstathiou, Haris Epaminonda, Rallou Panagiotou, Yorgos Sapountzis and Vangelis Vlachos – will show their work in an exhibition that is to be presented this year in the spaces of the Museum of Cycladic Art and is scheduled to run from 14th March until 30th September 2009.
This collaboration between the DESTE Foundation and the Museum of Cycladic Art is part of the latter’s “Young Views” program, which aims at launching a dialogue with a younger generation, at keeping the public up to date with the latest developments in contemporary cultural production and at ensuring the dynamic presence of a space for the exchange of ideas.