The exhibition is entitled 'What Keeps Mankind Alive?', the english translation of the song 'Denn wovon lebt der Mensch?' from The Threepenny Opera, written in 1928 by Bertolt Brecht, in collaboration with Elisabeth Hauptmann and Kurt Weill. The Opera thematises the process of redistribution of ownership within bourgeois society and sheds an unforgiving light on various elements of capitalist ideology. The concept proposes to reflect on latencies of the past in the present and investigate possibilities of art to re-examine old and open new relationships between social engagement and aesthetic gesture. The Biennial is curated by What, How and for Whom/WHW. 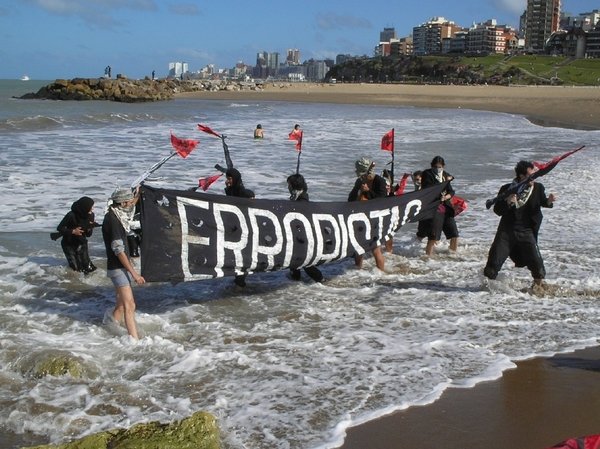 Curators What, How and for Whom/WHW

The 11th International İstanbul Biennial will be held in the city between September 12– November 8, 2009, with the curatorship of WHW curators collective. What, How & for Whom / WHW is a non-profit organisation for visual culture and curators’ collective formed in 1999 and based in Zagreb, Croatia. Its members are curators Ivet Ćurlin, Ana Dević, Nataša Ilić and Sabina Sabolović. Since May 2003, WHW has been directing the program of Gallery Nova, non-profit, city-owned gallery in Zagreb. All WHW projects have been conceived as a platform for discussing relevant social issues through art, theory and media, as well as a model of collaboration and exchange of know-how between cultural organisations of different backgrounds. Besides exhibitions, WHW projects encompass screenings, lectures, and public discussions conducted by international artists, curators and cultural theoreticians, publications and a book edition on contemporary cultural practice and cultural theory.

The 11th International İstanbul Biennial takes its title from the song 'Denn wovon lebt der Mensch?', translated into English as 'What Keeps Mankind Alive?'. The song closes the second act of the play The Threepenny Opera, written exactly 80 years ago by Bertolt Brecht in collaboration with Elisabeth Hauptmann and Kurt Weill.

A phenomenal success at the time of its premiere in 1928, the play was written as an adaptation of John Gay's 18th century The Beggar's Opera, and it set out to revolutionise theatre as both an artistic form and a tool for social and political change. The transformation of the 'theatre apparatus' by The Threepenny Opera, based on Brecht's assertion that 'a criminal is a bourgeois and a bourgeois is a criminal,' was achieved through an alteration of the existing notions of theatre 'genres' and the play's relationship with the audience.

Despite countless popular interpretations, undertaken by artists from varying backgrounds (such as Tom Waits, William S. Burroughs and the Pet Shop Boys, to name just a few), the song 'What Keeps Mankind Alive' has lost nothing of its power to unsettle and mobilize. Still, as the title of exhibition, it surely could be seen as being grandiose-not to mention the question mark, implying that the point is in the asking and not the answering-making it even more pretentious. And why not? Isn't the question posed by Brecht equally urgent today? And is it not true that we live haunted by the fears of approaching global changes, consequences of which could have lasting disastrous effects, not unlike those that transformed the world after the economic collapse of 1929? Aren't today's questions about the role of art in instigating social changes equally pressing as they were in the 1930s, when the Left confronted fascism and Stalinism? Or do we really consider them today to be solved within an all-encompassing system of cultural industry and its contemporary malformations, confined to art genres, predictable as cultural trends, and profitable for the purposes of marketing?

However, the International İstanbul Biennial is ahighly representative art manifestation, burdened as such by the usual complexity of dynamics between the local, the national, and the international in all its guises and titles, and a grandiose title seems quite appropriate-sufficiently open to marketing, political, theoretical and artistic uses and misuses.

It certainly seems that, seen from the dominant contemporary perspective(s), Brecht's Marxism and his belief in utopia, utopian potential and open political engagement of art all look a bit dated, historically irrelevant, in dissonance with this time of the crumbling of institutional Left and the rise of neoliberal hegemony. But the real question is, isn't this in fact symptomatic? Doesn't the way in which Brecht is now 'forgotten' and 'unfashionable'-after his immense popularity in the 1960s and 70s and a smooth transformation into 'a classic'-precisely the indicate that something has gone wrong with contemporary society, along with the role of art within it?

The Threepenny Opera thematises the process of redistribution of ownership within bourgeois society and through a literary narrative offers a still valid 'representation of capitalism itself -how to express the economic-or, even better, the peculiar realities and dynamics of money as such'.1 The play sheds an unforgiving light onto a variety of elements of bourgeois ideology such as charity, judiciary and police system, marriage, romance, fraternal love, religion and sovereign authority, at the very peak of the Weimar Republic in 1928, just before Hitler's accession to power in Germany. Brecht himself pointed out similarities between the time of early industrial capitalism when Gay's The Beggar's Opera was written, and his own time: 'We still have, however, the same sociological situation. Just like two hundred years ago we have a social order in which virtually all levels, albeit in a wide variety of ways, pay respect to moral principles not by leading a moral life but by living off morality.'2 The situation continues to this day, with the emphasis sliding periodically back and forth between religious morality and liberal democracy.

The similarities between the influence of rapid developments of liberal economy on the disintegration of hitherto existing social consensus in 1928 and in contemporary times are striking. In this respect it is useful to recall the analysis of another great author of the mid-twentieth century, political economist Karl Polanyi who published his seminal work The Great Transformation in 1944. Through analysis of the development of 'the deregulated market economy' and consequent rise of fascism, Polanyi warned against long-term tendencies of separating social from economical development, which in the end results in social chaos and rise of totalitarian regimes.

Just like Polanyi's, Brecht's analysis of pre-WWII developments bears alarming resemblance to contemporary times. 'What Keeps Mankind Alive?' will serve as a trigger, as well as a certain script for the exhibition. Even a quick look at the lyrics will discover many possible themes, such as the distribution of wealth and poverty, food and hunger, political manipulations, gender oppression, social norms, double morality, religious hypocrisy, personal responsibility and consent to oppression, issues certainly 'relevant' and almost predictable.

Today, biennial exhibitions are elements of cultural tourism through which cities attempt to use their benign and internationally communicative regional specificities to position themselves on the map of the globalised world; they are manifestations tending to 'cultural shopping' in which art is often presented as cool, fun, entertaining... Brecht was certainly critical of what he called a 'culinary' treatment of art solely as a means of entertainment, but he did not shy away from the entertaining role of art. In the popular and mass culture, as Brecht warned us, the problem is not pleasure, but its function. The question is therefore how to 'set pleasure free,' how to regain revolutionary role of enjoyment in a society in which, as Zizek points out, demands of the Super-Ego to enjoy-and not repression of enjoyment-have become the main mechanism of social regulation and repression.

Bringing back Brecht is an attempt to think about the role of artistic endeavour in the conditions of contemporary capitalism, to reevaluate our everyday practices, our value systems and modes of operation. Of course, as Fredric Jameson points out, there would be something "profoundly unBrechtian in the attempt to reinvent and revive some 'Brecht for our times', some 'what is living and what is dead in Brecht', some postmodern Brecht or Brecht for the future, a postsocialist or even post-Marxist Brecht, Brecht of queer theory or of identity politics...3 In taking Brecht as a starting position for developing the Biennial concept, the question of method is crucial. Is it possible to follow Brecht while disregarding his contemporary image of a Che Guevara of the academic Left, or a canonical author of the traditional orthodox Left, nonchalantly paying no attention to 'brechtology' and an apparent cul-de-sac in which countless reinventions of his experiments have ended? Is it possible, instead, to follow Brecht as a kind of (red) thread that leads the way in a search for a form and format for the exhibition, which would be, so to speak, 'beyond looking,' and could transform a viewer into a more productive participant-even accomplice?

What are Brecht's gestures, approaches and techniques that we, as artists, writers, curators, can repeat today? What could be the result? Collective creativity, epic theatre, Verfremdungseffekt, art as a means of popular education and political agitation... It does not mean that from today's perspective Brecht is offering a deus ex machina solution or a forgotten method that we can directly translate, but exactly the opposite-it is about creating a certain political-aesthetic puzzle that could stimulate us to properly formulate the problems of the present.

Brecht invites us to rethink our position again and again, to see the world as amateur actors, without dulling our critical faculties or our potential for intervention and change by learning the rules all too well. As a writer and a director, Brecht continuously sought to slice open and display, then deconstruct and transform the theatre's 'production apparatus'-it is this approach that should lead us out of the current deadlock of 'contemporary art apparatus.' At this time, the question of 'usability' of Brecht means first and foremost a repeated need to observe the interaction of art and social relations.

'What Keeps the Mankind Alive?' will take place in Antrepo No.3 (Karaköy), Feriköy Greek School (Şişli) and Tobacco Warehouse (Tophane), two of which are sites that were formerly reserved to fuelling the primary economy, nowadays turned into regular exhibition spaces. Becoming a 'space of culture' seems as well to be the best-case scenario for the 're-development' of Feriköy Greek School, an abandoned school lacking pupils. Two of the exhibition spaces (Antrepo No.3 and Tobacco Warehouse) are familiar to the audiences from previous biennials and all three are located in predictable central areas on the European side of İstanbul, where most of the cultural events take place. While many Biennials in recent years actively engage with their 'home-cities', and offer new viewpoints and redefinitions of their urban identity, 'What Keeps Mankind Alive?' will use given parameters of the biennial format to question the potential of a mainstream cultural institution to both impose and contest dominant social frameworks. What are the questions that can still be opened up through an exhibition of such a visibility, and what is the knowledge that can be generated by it?

In İstanbul and Turkey, where 'the conflict between an orthodox left position and contemporary art plays a critical role today in the understanding of contemporary art,'4 to exit the impasse of double-bind discourses of global neoliberalism and local ethno-nationalism seems to be the only endeavour worth all the trouble. Yet, to oppose the new forms that the ideology against ideology has taken in recent years5, to learn from the inability of the old left to rise from the ruins of the social state and to create new and meaningful alliances, are efforts that go well beyond Turkey.

1 Fredric Jameson, Brecht and Method (London-New York: Verso, 2000), p. 13.
2 Bertolt Brecht. 'On The Threepenny Opera', in The Threepenny Opera, translated and edited by Ralph Manheim and John Willett (Penguin Classics, 2008), p. 92.
3 Jameson, Brecht and Method, p. 5.
4 Süreyyya Evren, in Art + Politics. From the Collection of the City of Vienna, edited by Hedwig Saxenhuber for the Department for Cultural Affairs of the City of Vienna 2008 (Springer, Wien, New York: Museum on Demand), pp. 170-183.
5 "26 July. Brecht, last night: 'There can't be any doubt about it any longer: the struggle against ideology has become a new ideology.', Walter Benjamin, 'Conversations with Brecht', in Aesthetics and Politics (London- New York: Verso, 2002), p. 97.