Conceptualism in California from the Permanent Collection 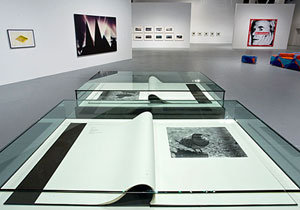 A survey of conceptual and post-studio practices in California, Index: Conceptualism in California from the Permanent Collection draws on MOCA’s substantial holdings of work by California-based artists who have contributed to the international lexicon of conceptualism. Since its inception, the museum has played a significant role in both defining and expanding the parameters of conceptual art, presenting comprehensive benchmark surveys including A Forest of Signs: Art in the Crisis of Representation (1989) and 1965–1975: Reconsidering the Object of Art (1995).
Conceptual art developed during the late 1960s in response to the preceding pop and minimalist movements, as well as to tumultuous events including the Korean and Vietnam wars and civil rights and labor movements. Intellectually rigorous and often humorous, conceptual practices emphasize the primacy of ideas over objects, often employing language, repetition, and documentation and incorporating historical and cultural references. In addition, many works present critical responses to the institutions of art themselves (an approach literalized in Chris Burden’s Exposing the Foundation of the Museum [1986/2008]). At the core of Index is an emphasis on the crucial period spanning the late 1960s to the mid-‘70s, when Michael Asher, John Baldessari, Douglas Huebler, David Lamelas, William Leavitt, Allen Ruppersberg, Edward Ruscha, and Allan Sekula, as well as proto-conceptualists like Wallace Berman and Bruce Conner, were creating work that would come to epitomize the tenets and strategies of conceptual art.

Recognizing the important legacy and long-ranging influence of the 1960s and ‘70s, Index also presents post-conceptual explorations by the next generation, including Jack Goldstein, Barbara Kruger, Mitchell Syrop, James Welling, and Christopher Williams. During the late 1970s, California Institute of the Arts in Valencia; University of California, Los Angeles; and San Francisco Art Institute were among the many influential schools in California where artist-teachers like Asher and Baldessari advocated a pedagogy rooted in intensive individual studio practice balanced with critical discussion. Informed by pop, minimal, conceptual, and feminist art, the work of second-generation conceptualists coming out of these schools is characterized by its ironic distance and concern with gender roles, sexuality, the construction of identity, and the wide-ranging psychological impact of media and corporate cultures. Many of these artists joined a variety of media into single works: Nayland Blake, Meg Cranston, Richard Jackson, Mike Kelley, Martin Kersels, and Stephen Prina combined sculpture, performance, painting, drawing, and photography to startling effect, often using found objects and mundane imagery to rethink autobiographical narratives through conceptual frameworks.

As is well documented in the writing about California art of the 1990s, the physical and cultural landscape of the region fosters diversity in art practices, as does the multigenerational makeup of the artist community. Responding to earlier conceptual modes, artists including Cindy Bernard, T. Kelly Mason, and Dave Muller cultivated multifaceted practices resulting in works in media that are melded or invented, with an emphasis on social interaction as an aesthetic activity. Research-based content and highly specific installation details inform the practices of artists like Richard Hawkins, Sharon Lockhart, Sarah Seager, Diana Thater, and Lincoln Tobier, while works by Jim Isermann, Jorge Pardo, and Pae White quote directly from the decorative arts and innovative 20th-century design to explore a cultural understanding of furniture, architecture, and sculpture.
As the vocabularies of contemporary art are shaped by California’s rich artist community, the roots and influence of conceptual art are constantly and simultaneously present and evolving. With generations in dialogue within art schools and in studios throughout the region, California artists continue to innovate from the solid foundation of conceptualism.

Image: Installation view of Index: Conceptualism in California from the Permanent Collection at The Geffen Contemporary at MOCA, 2008, photo by Brian Forrest