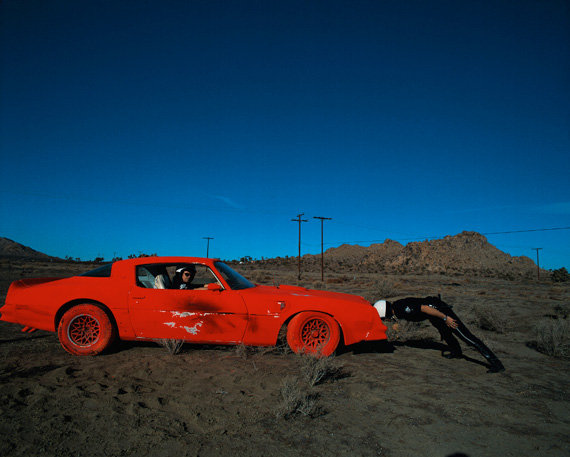 From August 1 to September 5, 2009, CAMERA WORK will exhibit the works of the Danish photographer Pierre Winther in its gallery showrooms.

Pierre Winther is the creator of illusions and stories of graphic quality, from which he has developed his own individual cinematic style. His narrative photographs have attracted a great deal of attention worldwide and have, over the years, shaped award-winning international advertising campaigns, music videos, as well numerous renowned magazines. The roughly 60 exhibits on display, among them the series Lunar Drive which will be presented for the very first time, provide an exemplary overview of the work of the artist.

Daily meteorite showers, no grass and no trees. It is a rather inhospitable place named "Libra" on which the portrayed humans of Pierre Winther's series Lunar Drive live. The planet is smaller than Earth, resulting in less gravity. However, this enables the inhabitants of "Libra" to conduct space flights. Filled with the desire to leave this hostile planet behind, a number of its inhabitants take off for planet Earth. They push themselves off by aiming their small arms weapons toward the surface of "Libra." With flaming muzzle flashes, the portrayed ascend towards the skies with great dignity. The artist has staged the moment of take-off with several powerful photographs of which six will be displayed in the exhibition.

Another series by Winther, entitled Holiday on Earth, opens out into a colorful surreal world, shaped by a dense atmosphere so typical of the artist. It is angular male lay actors and not professional, clean models who pull the observer into an adventurous picture story which moves on a thin line between fiction and reality. The conceptual picture series of the artist operate like short films.

The photograph Shark riding, which has in the meantime become legendary, is definitely the most well-known photograph of the exhibition. The non-manipulated picture of a young man who casually rides a tiger shark, like a rodeo cowboy with shades, succeeds in astonishing the observer anew - time and again.

Pierre Winther has photographed campaigns for companies such as Diesel, Dunhill, Hugo Boss, Levi's, and Nike. His photographs are published in magazines such as Dutch, The Face, Flaunt, iD, Rolling Stone, Spin, Vibe, and Vogue. In addition, he has created music videos and covers for artists such as Beastie Boys, Björk, INXS, Massive Attack, Nicolette, Skunk Anansie, and Tricky.