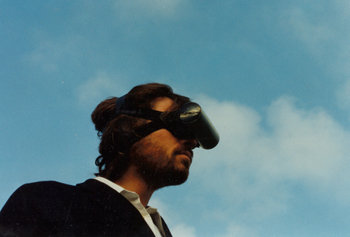 Färgfabriken has the pleasure to present the first comprehensive survey of Ola Pehrson's work. Despite major international success, this is the first opportunity for audiences to see and experience his key works in relation to one another. The Ola Pehrson Retrospective will also draw a portrait of an artist that, in his own highly personal way, has given shape to some of the most burning questions of our time.

In Ola Pehrson's art we are confronted with monumental powers such as the mass media and global capitalism, and we move swiftly in and out of digital and virtual worlds. Central to his art is an interest in human behaviour--what controls it and how it can be manipulated. A fascination over how we perceive reality and how this perception in turn shapes behavioural patterns links Pehrson's work to cognitive science and all the way back to Plato's Doctrine of Ideas.

Ola Pehrson was born in 1964 and trained at Idun Lovén and the Royal University College of Fine Arts in Stockholm. He had a major breakthrough in 1999 with the work Yucca Invest Trading Plant, presented at Tensta Konsthall and the Modern Museum in Stockholm. At the time of his death, in April 2006, Ola Pehrson's art had attracted considerable international interest. His work had been shown on three continents and what came to be his last piece, Hunt for the Unabomber, received great attention at the Istanbul Biennale (2005) and the São Paolo Biennale (2006). The piece was acquired by the Modern Museum in 2006 for its permanent collection.

The Ola Pehrson Retrospective has been presented in a smaller format in Škuc Gallery, Ljubljana and the Museum of Contemporary Art, Belgrade in 2007-8. The exhibition at Färgfabriken will be complemented with a rich program of talks, seminars and guided tours.


Opening: Wednesday 2 September 5 p.m. – 1 a.m.
On the opening night, NASDAQ Vocal Index will be performed as an homage to Ola Pehrson at 8.30 p.m.