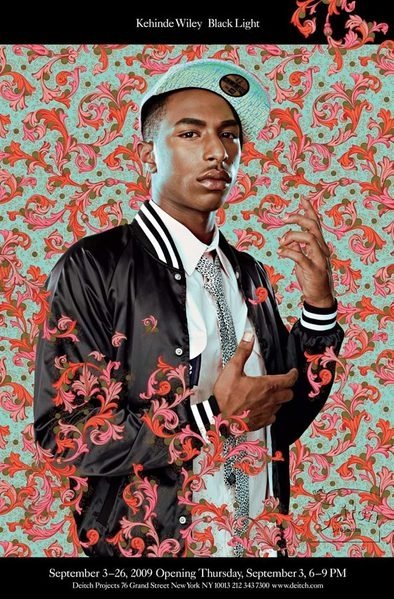 Deitch Projects is pleased to present Black Light, an exhibition of photographs by Kehinde Wiley that thrusts the black male image, captured by means of light manipulation and digital technology, into focus. This shuffle of Wiley’s artistic process reveals an integral component of his studio practice rarely seen while remaining, uniquely, Kehinde Wiley portraiture.

Enlisting the technical tenor of Hype Williams’ hip-hop videos from the 90’s, Wiley saturates his consummately styled subjects of Fulton Street Mall pedigree— caps flipped backward, wearing gear of New York legend— in “super rapturous light”. To transcendental and beatific effect, such illumination proffers a new measure of Wiley’s technical abilities, so that the medium of photography propels each figure to the point before paint consumes canvas— the moment when flesh, at its three dimensional, truth-telling, reveals scars long ago enacted. Browned fingernails, questioning red-glazed eyes and voluptuously glossed, cigarette-charred lips heighten what, for some, is no longer visible: a vulnerable microcosm of our metropolis— a black light. Through the 17 photographs on display, Wiley produces an intimate study of embattled psychologies whose adherents are at once flawed and majestic, canonized and misunderstood.

The exhibition Black Light will be accompanied by, Black Light, a full-color book published by Powerhouse and will be available at Deitch Projects