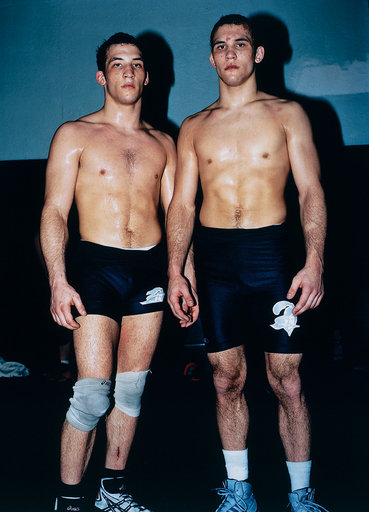 The title of Collier Schorr's first exhibition at Galerie Barbara Weiss, Here, The World Held Its Breath / Hier hielt die Welt den Atem an, is just one example of the layered readings at play in Schorr's multi media practice. Taken from a book she found in a junk store, the dramatic imperative of the title resonates with Schorr's engagement with place and the contradictory narratives that make up history. "Where exactly is 'here?'" and "What would it be like if the world held its breath?" were questions Schorr asked herself. Further complicating the question of interpretation was the discovery that the book's title was a translation from English and was originally simply called "A Treasury of Great Reporting". Schorr decided the translation was personal: a warning to the German reader about him or herself, the Here becoming one super-essentialized location that embodied worry and subsequent warnings.

Collier Schorr was born in New York City but has been working on a quasi-documentary project Forest & Fields in Southern Germany for the past 18 years. Here, The World Held Its Breath continues her dissection and reinvention of daily life in the small town of Schwaibisch Gmund. Taking a posture somewhere between Robert Frank's traveling passerby and August Sander's authoritative documentarian, Schorr's work maps her own history, both imagined and inherited, and tells the interwoven stories of a small town observed by an outsider. Epistemologically, Schorr's works seem to akt like traditional letters from an appropriated home written those left behind -- only that its not completely clear, whether the characters she "talks" about, or the people she "writes" to, exist at all. Probing the forbidden nature of nostalgia and homesickness as well as national representation and émigré family life her images bounce between the bright sunlight of summer and the harsher tones of strobe lights in a makeshift outdoor studio, establishing a tension between present and timelessness, "here" and misinformed there.

In the video In The World (2008), a character, as if waking from a dream ¬finds himself out of sync with the world around him. Time drags as he moves against the tide of those that pass him by. Schorr uses the term "found performance" to describe what appears to be directed but is actually only ever observed from afar. The work points to Schorr's interest in conflating the often conflicting agendas of narrative cinema (Francois Truffaut's The Wild Child) and performance/dance documentation (Lili Dojourie, Yvonne Rainer). This performance is unscripted, the artist and the youth/actor have never met, yet through a tenuous connection, a scenario unfolds that that captures the intentionality of a stylized choreography as well as a most basic humanistic struggle.

The charcters of Schorr's small town line the walls of a non-descript white room in the short video Neighbors 1 (2009). Rather than the lush large-scale photographs Schorr is known for, the attentive yet restrained characters exist as Xerox copies. The viewer is literally led around the space, while standing still in the middle of the gallery.

/Works appearing in this show can be found in Volume 1 (Neighbors 2007) of Forests & Fields, published by SteidlMack. Volume 2 (Blumen 2009) will be presumably published at the end of 2009.