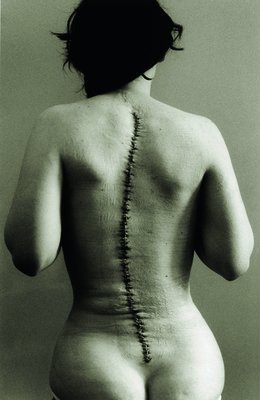 Last year’s exhibition "Darkside I – Photographic Desire and Sexuality Photographed" explored the role of photography in the imaging of sexuality and desire. Now, the sequel, "Darkside II", looks at the opposite end of the photographic spectrum, charting the path from the body as a veritable ‘picture of health’ to the body injured, disfigured or mutilated, in decline and decay.

The exhibition begins with the focus on positive energies: taking a gamble, venturing forth, competing, without knowing what the outcome will be. These are situations involving physical risks, pushing the body to its limits in pursuit of pleasure and bonding. Diving into water, entering the ring, risking injury: ambivalently perhaps, but driven by positive energies, by strength, ambition or eroticism, and always by free choice. Up to this point, the body remains more or less unscathed in spite of the risks taken; radiant even after a fight, smiling in spite of any physical or mental injury. But from here on in, the boundaries shift. Free fighting is gaining ground both in the ring and in everyday life. The body as the dwelling-place of the self, usually subject only to natural fluctuations and developments, is redefined, reconfigured, inscribed and pumped and injected. It is slimmed and trimmed, adjusted and adapted to new imagery. Its integrity is violated. Reshaped and interfused by many different cultural body images and by new, sometimes contradictory, identities, it is transformed from a dwelling-place into an instrument that is constantly being sharpened and polished, trained and toned.

Then the body is opened up: it is injured, wounded, distorted, decaying and rotting inside. Sophie Ristelhueber’s photograph of a woman with a massive scar running all the way down her back tells of a body that has had to be cut apart and opened up, treated and then sewn together again with multiple stitches. The huge scar will long bear witness to this act of disclosure, of revealing what lies within. Scars mark and shape the earth and the mountains, people, their bodies and souls, reminding us of the fragility of the body and its temporary or permanent disfigurations. When intervention is necessary, the body is temporarily handed over to an external, substitute system to which it forfeits its sovereignty almost submissively.

Bodies are subjected to massive forces. They collide, crash, burn, explode; they are shot at, injured, ripped apart, raped, mutilated, hacked to pieces; they are executed, hanged, decapitated, poisoned, electrocuted. The energy vector has changed direction. In the next section of the exhibition, the body no longer steps into the world to stake out its territory and form bonds with easy abandon. Instead, it is buffeted by a massive thrust-reversal of energies. Physical, mental and emotional forces attack its integrity, injuring it, destroying its spiritual and material system. Images of domestic violence, of assassination attempts, wartime attacks, bomb explosions, mass murder, xenophobic rage, structural and social violence, and state power are shown.

Gradually, the body goes into decline. It ages, shrinks, stiffens, withers, disintegrates and decomposes. And what remains? The assertion of dignity against the decline of the body, then death, then just the body itself, the funerary rites, the rituals of remembrance, the anatomical knowledge of the body. Death, unlike life, is a barely tangible, abstract concept, a concept that is negatively defined: drained of energy, devoid of life or spirit. A strange, existential nothingness.

Violence attracts images. The visual world of western culture is full of images of violence – both random outbursts of violence and military violence, regulative state violence. In a strange reversal, societies have shut away images of life-affirming, life-giving sexuality, banishing them to the fringes of obscurity, whereas images of dark and excessive violence have been brought into the light. The reasons for this are many and complex. They function in much the way as nouns do, by naming something: the tangibility of the portrayal comforts us, as a means of grasping the horror. Images of violence excite and electrify all those the horrors have passed by uninvolved. They read like memorials, like visual tablets of the law, when they portray state and judicially sanctioned violence. They claim to be enlightening, accusatory manifestos and moral appeals for an end to the horror they portray. And what is more: they sell. People are fascinated by shocking photographs of horror, terror, murder and branding, not only for the reasons already mentioned, but also because of a desire to glimpse at the dark side of civilised, orderly life. Having a part in something without actually participating – a kind of voyeurism of violence and its portrayals.

On the other hand, images themselves attract violence. Images generate energy, power and violence. They not only represent, but they also present; they are monstrative. "Each image is a monstrance... the image is of the order of the monster," writes Jean-Luc Nancy in Image and Violence. "The monstrum is a prodigious sign," he goes on, "which warns … of a divine threat." The image must be able to present itself. It must be able to irrupt out of nothingness and externalise itself. In addition to this visual power, photography also has the power of the factual, the power of realistic portrayal, coupled with the framing of time and place by which the camera – through such choices as shutter speed and lens, what is included or excluded, close-up or distance, sharp focus or soft focus – can separate the image from the continuum of reality. This power is an inherent trait of the photographic medium. We can also discern a kind of performative power: the act of photographing not only documents, but also intervenes in what is happening. Children laughing, women crying – because they are being photographed. Certain acts of war occur only because a camera is present.

Plato, as cited by Abigail Solomon-Godeau, maintained that "... it is not by means of the image that moral, ethical, or political knowledge is produced". Some 2400 years later, we are living in a visually sophisticated media world in which the latest, the closest, the most horrific, have become redundant. And in Ingeborg Bachmann’s short story Three Paths to the Lake, the character of Trotta complains to his photographer girlfriend, "Do you suppose you have to photograph those devastated villages and corpses so that I can imagine what war is like, or take pictures of children in India so that I know what hunger is? What kind of stupid presumption is that? ... Looking at corpses is not the way to stimulate liberal-mindedness." Who photographs, who publishes, at whose request, for what audience, and with what intent? How much money is involved and how good is the quality of the print? All these questions have to be asked anew, time and again, about images of horror and of physical, human terror. For the image rarely stands on its own merits. There is always an overall context that makes such images seem relevant, irrelevant, or simply shocking. And yet, reality is always more violent than any image.

The exhibition addresses these dark sides of the body image and explores many of the questions raised by photographic representation. For this reason, the accompanying catalogue is not only richly illustrated, but also includes eleven essays discussing issues of photography and violence, and photography and death.

Image: Sophie Ristelhueber, Every One # 14