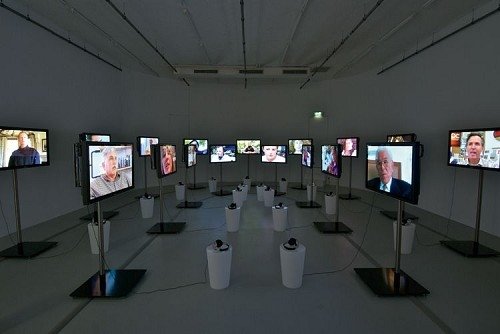 With Küba (2004) and Paradise (2007) Museum Ludwig is showing two key works by the Turkish artist and film director Kutlug Ataman (*1961). Both pieces act as video-groupportraits, with each monitor showing one person. Küba portrays 40 inhabitants of the Küba estate in Istanbul, which was founded in the 1960s by people who for a great variety of reasons were unwelcome in Turkish society. By contrast Paradise shows 24 portraits of people from Orange County in southern California.

Both works give the impression that the people in the two locations identify strongly with ‘their' places. And in both works something like a collective identity can be distinguished among the people portrayed. But time and again Kutlug Ataman stresses the importance in his videos of giving voice to the individual, who cannot be subsumed under a collective structure. Consequently, listening to this voice is the only way to learn something about the people portrayed here, as well as about the Küba estate and the alleged paradise of Orange County. In the case of Küba one has to plunge into the babble of voices issuing from 40 old television sets in order to concentrate on just one. In Paradise, on the other hand, the viewer has the choice between listening to the monitor in the middle, which is the only one fitted with loudspeakers and which plays a different video every day, and listening to one of the other 23 videos by means of headphones. Either way, the experience will
be fragmentary and thus highly personal for the viewer.

On September,1, at 7 p.m. there will be a visitation of the exhibition with Kutlug Atman.
At 8 p.m. the artist will hold a talk on the roof terrace.