The project starts with the premise that art is not a code that needs cracking. Celebrating the experience of not-knowing and unlearning, the artists in this exhibition understand the world in speculative terms, eager to keep art separate from explanation. Embracing a spirit of curiosity, this show is dedicated to the playfulness of being in the dark. Works by: Marcel Broodthaers, Mariana Castillo Deball, Peter Fischli & David Weiss, Giorgio Morandi, Matt Mullican, Bruno Munari, Rosemarie Trockel, and many others. 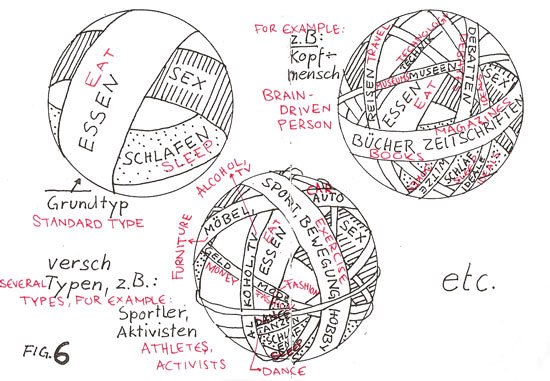 We begin in Ancient Greece, with Socrates announcing, "I know that I know nothing." Clearly, confusion has always been at the heart of wisdom.

Centuries later comes a statement many have attributed to Charles Darwin: "A mathematician is like a blind man in a dark room looking for a black cat that isn’t there."As a scientist committed to cataloguing, explaining, and drawing a clear picture of nature, Darwin mocked the mathematician’s inability to describe the physical world in anything but abstract and speculative terms.

But artists also understand the world in speculative terms. With their help, we can learn to enjoy the experience of not-knowing and the playfulness of being in the dark.

This is for the blind man in the dark room looking for the black cat that isn’t there.

The Contemporary Art Museum St. Louis is pleased to present the international group exhibition For the blind man in the dark room looking for the black cat that isn’t there, organized by Contemporary Art Museum St. Louis Chief Curator Anthony Huberman. The first large-scale collective exhibition since the Contemporary’s inaugural show in 2003, For the blind man ... is on view throughout the entirety of the museum’s exhibition spaces from September 11, 2009 to January 3, 2010.

For the blind man ... celebrates the speculative nature of knowledge and proposes that curiosity matters more than understanding. While the artists featured in the exhibition all share our common urge to understand the world, they are also eager to keep art separate from explanation. As speculations, the works on view each allude to a search for knowledge, while insisting that art is not a code that needs cracking. Embodying a spirit of playful non-knowledge, unlearning, and productive confusion, For the blind man ... is dedicated to the inquisitive mind and to the pleasures of finding our way in the dark.

Sarah Crowner re-inserts into circulation the two issues of the 1917 journal The Blind Man (edited by Marcel Duchamp, Henri-Pierre Roché, and Beatrice Wood), offering copies on sale at the museum’s front desk at the publication’s original cover price of 10 and 15 cents. In search of an explanation of a painting, Marcel Broodthaers interviews his cat in a recording from 1970 in his Musée d’Art Moderne, Département des Aigles. For their 16mm film Flash in the Metropolitan (2006), Nashashibi/Skaer (Rosalind Nashashibi and Lucy Skaer) wander through the Metropolitan Museum of Art with the lights off, using a strobe light to briefly illuminate portions of small sculptural statues and vessels, as if the long story of the Metropolitan was reduced to a series of short poetic haikus. A 17th century anonymous illustration of a Renaissance Wunderkammer, or curiosity cabinet, reminds visitors that museums have long been places where people enjoy discovering extraordinary things that they do not understand.

Peter Fischli and David Weiss struggle to understand the world, embracing large metaphysical and ethical questions about the human condition. In The Right Way (1983), dressed in rat and bear costumes, they walk through the infinitely beautiful Swiss countryside, through streams and glaciers, stopping to consider existential questions along the way. With a mix of humor and anguish, their childish discoveries offer playful explanations, also represented in a newly revised series of diagrams Order and Cleanliness (2003-2009). Rachel Harrison presents her own version of Darwinian exploration, in her Voyage of the Beagle, Two (2008), a series of fifty-eight photographs, while a selection of her abstract monochrome sculptures stand nearby.

Although he made over a thousand works, Giorgio Morandi seemed to insist that to paint a still-life would always be a speculative proposition. To the noise of the modern era’s machines, wars, and technology, Morandi maintained a diligent curiosity about ordinary and familiar things. He painted table-top arrangements of bottles and bowls over and over again, as if always refusing to understand them. In a similar but more playful spirit, Bruno Munari tirelessly looks for comfort in an uncomfortable chair.

In a major new sculptural installation, Dave Hullfish Bailey constructs a sprawling research laboratory built in modular parts and folding out from the metal frame of a trailer. The form reflecting its content, the project devotes itself to survivalist living and do-it-yourself systems. In a more modest attempt at categorizing information, Hans-Peter Feldmann shows one pound of strawberries in thirty-four small photographs. Two monitors present a video about a coffee fortune- teller by Ayşe Erkmen and a series of mock-professorial lectures by Eric Duyckaerts.

Based on an imaginary face-off between Nietschze’s wise eagle-serpent and Rimbaud’s dumb donkey, Jimmy Raskin’s new installation includes sculpture, video, wall graphics, collage, performance, and site-specific interventions. Also linked to language and hesitation are new collages by Frances Stark and a two-channel projection by Falke Pisano. Finally, bringing the exhibition back to mathematicians and to blindness, Mariana Castillo Deball hangs a car-sized piñata in the shape of a Klein Bottle in the museum’s performance space. On the exhibition’s last day, a crowd of blindfolded museum visitors will break it apart.

For the blind man ... is accompanied by a new publication conceived, edited, and designed by Will Holder, and includes a selection of stories, images, digressions, and games.

For the blind man in the dark room looking for the black cat that isn't there is organized by Contemporary Art Museum St. Louis Chief Curator Anthony Huberman.

For the blind man in the dark room looking for the black cat that isn’t there will travel to an additional American venue, and a slightly modified version of the exhibition will simultaneously travel to three European venues:

For the blind man in the dark room looking for the black cat that isn’t there is generously supported by Jeanne and Rex Sinquefield, The Andy Warhol Foundation for the Visual Arts, The Flemish Ministry of Culture, Fundación/Colección Jumex, and Mondriaan Foundation, Amsterdam. General support for the Contemporary’s exhibitions program is generously provided by the Whitaker Foundation; The Andy Warhol Foundation for the Visual Arts; William E. Weiss Foundation; Nancy Reynolds and Dwyer Brown; Regional Arts Commission; Missouri Arts Council, a state agency; Arts and Education Council; and members of the Contemporary Art Museum St. Louis.