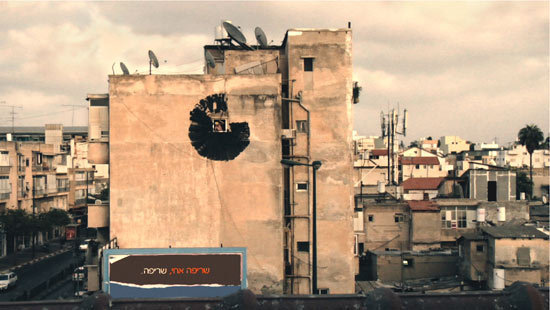 Art TLV, the International art biennial running from September 10–24, 2009 with professional previews on September 9, is the main art event of Tel Aviv-Yafo’s centennial celebrations, featuring leading contemporary Israeli and International artists creating exhibitions, installations, performances, screenings and talks throughout the city. Following the success of the inaugural Art TLV 08, Art TLV 09 now aligns with the Athens and Istanbul biennials to foster experimentation and exchange within a Mediterranean cultural triangle.

Art TLV 09 will be attended by curators, writers, and art enthusiasts from around the world to explore the city’s bourgeoning contemporary art and architecture scene.

MORE ON ART TLV 09
Using the 100th Anniversary of Tel Aviv as the starting point, the festival addresses visual representations and perceptions of the modern city from changing perspectives, and the ongoing and unresolved tension between a deep awareness of history and a rhetoric that celebrates modernization and perpetual regeneration. Juggling between identities and engaging in debates over demolition versus restoration, leveling versus conservation, and remembrance versus oversight, creates a duality that nurtures artistic creation in the city.

The exhibition juxtaposes the close, inspective, analytic and critical view with the panoramic, lofty, unifying, effacing, suppressive and mythicizing one. It combines the impassive gaze of the urban flâneur with that of a conscious social and political stance. Works by over 40 Israeli and international artists relate to the myths, materials and concepts connected to Tel Aviv-Yafo, a city that according to the Zionist myth "rose from the sand dunes," segregating itself from its older neighborhoods and from Jaffa, the "black city" according to the post-Zionist discourse; "a non-stop city," a city that turns its back on the sea, a Mediterranean coastal city, a westernized metropolis, a world city and a city with a vibrant art-world.

SIDE SHOW
Side Show invites artists to take works outside of the historical buildings to inhabit the urban space itself in a series of outdoor exhibitions and interventions. The works explore issues related to activism and street art, mapping various territories of the city physically and mentally, concretely and metaphorically. The act of mapping enables the works to raise questions regarding memory, history and the hierarchies of space, and also applies romantic and nostalgic notions of Tel Aviv, juxtaposing them against reality by joining together different realms of time and space. Mushon Zer-Aviv & Lailah El-Haddad's “You Are Not There” allows participants to virtually tour Gaza while walking through the streets of Tel Aviv with a double-sided map of both cities and cell phone audio tours corresponding to numbers in the streets. Ilan Green’s installation uses sounds and voices recorded in the historic Ahuzat Bait neighborhood. And Eran Shakin’s digital sculpture between Jaffa and Tel Aviv changes according to the tides. The works provide unique and intimate encounters between artist and public, art and city. They borrow from the terminology of leisure and tourism, shifting it to allow the political to sneak in. The exhibitions articulate the chaotic intensity synonymous with Israeli environment at large and Tel Aviv in particular.

A PLACE OF MEMORY
Said Abu Shakra curates a special section of Art TLV 09 bringing personal and collective memories of the Palestinian experience in Umm al-Fahm. It is centered on a diary-like work: 25 videos documenting the last six months of Shakra mother's life telling of her experiences in the villages before and after war and expulsion - flight, loss, endurance, culture, daily rituals, and relationships. Other works in the project depict the primal landscapes of Umm al-Fahm featuring engravings by Shakra's brother, artist Walid Abu Shakra; Shai Aloni's photographs of Umm al-Fahm’s seniors; and Guy Raz’s photographs of the “Mashkharas” – the sites of charcoal production around Umm al-Fahm, charcoal being the substance from which Umm al-Fahm had taken its name hundreds of years ago.

Art TLV 09 CURATORS
Edna Moshenson leads the Biennial curatorial team and is an independent curator and former Senior Curator at Tel Aviv Museum of Art. Maayan Sheleff is a curator at the Center for Contemporary Art, Tel Aviv, and until recently was the curator of the non- profit art space Line 16. She is the assistant director and a lecturer at the International Curatorial Studies Program of the Kibbutzim College of Education and the Center for Contemporary Art, Tel Aviv. Michael Kessus Gedalyovich is an artist, curator and chief editor of Maarav online art magazine, and previous director of Omanot La’am’s art department, an art organization that brings art to Israel’s periphery. Said Abu Shakra is an artist, curator, and Director of the Art Gallery in Um El Fahem, and is currently working to build Israel’s first Arab museum of modern art in Um El Fahem, designed by Amnon Bar-Or.

ADDITIONAL EXHIBITIONS AND PROJECTS COINCIDING WITH ART TLV 09
Ex-Territory is a floating platform in the Mediterranean Sea for inter-cultural exchange. Existing outside sovereign territory of any specific country, the project launches during Art TLV 09 and brings together Palestinian and Israeli artists, international curators, thinkers, and researchers from conflicted countries on a ship. By cruising in exterritorial waters, the project circumspects the mental and geographic borders that render such meetings impossible. Discussions, interviews, and video screenings on the ship’s sails question concepts of power, nationality, law and territory while suggesting alternative cultural and political models. Ex-Territory is initiated by Michal Kesus Gedalyovich, Renard Gluzman, and Ruti Sela and Maayan Amir (who co-curated Wild West, a video program for the launch event). The project will continue for 5 years throughout the world in areas of conflict with cultural events and discussions at local art centers in various coastal cities.

Second Show: Contemporary Art from The Israel Museum, Jerusalem will be presented at the Mani House, now Bank Leumi, one of the first houses built in Tel Aviv in 1909. A selection of Israeli and international works addressing ideas of introspection, fantasy worlds, myths, and reflections about the history of art and culture by artists including Pierre Bismuth, Claire Fontaine, Erez Israeli, Efrat Natan, Pipilotti Rist, Ugo Rondinone, Mika Rottenberg, and Shai Zurim.