Untitled (plate tectonics). The artist explores the physical dimensions of location in contrast to its perception. After obtaining the ambient sounds of eleven "natural" art locations in New York - museums, fairs, galleries - Graydon cut the recordings onto unique acetate phonograph records, dubplates, that allow visitors to reshape the gallery space with sound. 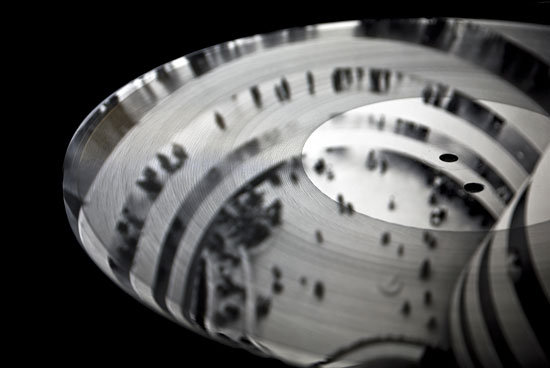 By installing excavated stones from New Jersey in a gallery, Robert Smithson, in the late 1960s, revealed the dialectic between abstract and actual locations. Sometimes in containers, sometimes piled, the stones in the gallery represented a far away location without resembling it. Something of New Jersey, Smithson maintained, was held in those rocks and their displacement resulted in the expansion of the original site, both physically and conceptually. The Site Non-Site dialectic, as Smithson called it, feels particularly familiar today as our daily lives are continually reshaped by place-defying technologies in communication, information and travel.

With Untitled (plate tectonics), Andy Graydon similarly explores the physical dimensions of location in contrast to its perception. After obtaining the ambient sounds of eleven “natural” art locations in New York – museums, fairs, galleries – Graydon cut the recordings onto unique acetate phonograph records, dubplates, that allow visitors to reshape PROGRAM’s gallery space with sound. Environment is used as a material. Replaying the sounds of these New York institutions as they intermix with the ambient sounds of PROGRAM, space is at once extended and collapsed. Dubplates, for the music industry, are used in mastering studios before the final master. They are meant for temporary use, they deteriorate over time. The sounds recorded on its surface are lost after about fifty plays.

Artist's statement:
What is a visitor to the Met doing when she views the Greek sculpture garden almost exclusively through the LCD panel of her camera? What kind of experience is being produced? It is a familiar lament that our culture is losing its ability to attend, to look with engagement at art and at everyday experience. But that lament overlooks a compeling fact: the visitor is composing.

In those photos, sounds, or videos, the art and the surrounding space are collapsed together (i.e. onto a picture plane) and rendered plastic, malleable, in a sense modular. Most importantly they are incorporated into the world of the viewer, rather than the reverse. In this sense there are few more democratic gestures in an exhibition than to point a device and make a recording, not to preserve a record of the place, but to impose upon it a unique continuity, a contour of oneís own experience; to sculpt with it.

A museum or exhibition space aims to present a coherent itinerary of (largely visual) experience. Sound tends to tell a different story, revealing places and intervals that are disruptive, distracted, intense, or diffuse, but rarely discrete. Indeed, sound abhors discretion. It can only exist through disruption and agitation. Sound is inclusive and immersive: if you hear it, it is vibrating you. This helps to explain the conflicted relationship contemporary art exhibition has had with sound work, in which playing pieces on headphones has become the favored way of taming sound into an ideally discrete sound-object.

With this in mind, Untitled (plate tectonics) works with the exhibition space (both recorded and present) not as a resolved environment for the reception and contemplation of works, but rather as both an impulse (as in electrical energy) and as a material, a moldable substance useful in the creation of other ideas, further experiences, alternate places.

Andy Graydon (1971, Maui, Hawaii) is an artist and filmmaker based in Berlin. His work focuses on the relationship between media and environment. In 2008 Graydon was part of the New Museum’s inaugural exhibition Unmonumental, and his installation Untitled (Ground) was presented at LMAKprojects gallery in New York. In 2007 his installation Room Works was the subject of a solo exhibition at the Portland Art Center (Oregon). Geomancy, a new collection of film and sound works, was released on cd and dvd by the Tokyo label mAtter in June 2009. http://www.andygraydon.net

Thanks to Michael Connor, Lauren Cornell, Heike Fetzer and Christoph Grote-Beverborg at Dubplates and Mastering, and Holger de Buhr at Just Music. Special thanks to Ben Owen, Andrea Williams, sawako, Richard Garet, and Pe Lang who contributed recordings and compositions to this work.

The exhibition is kindly supported by justmusic and Rhizome.

PROGRAM is an interdisciplinary platform for projects examining architecture, the arts and their disciplinary boundaries.
PROGRAM was founded by architects Carson Chan and Fotini Lazaridou-Hatzigoga.