The introduction of the grid, and its development within his painting to encompass a richly suggestive array of networks, maps, road and rail systems, established an enlivening dynamic between the notion of order and apparent disorder and between the man-made and the natural. 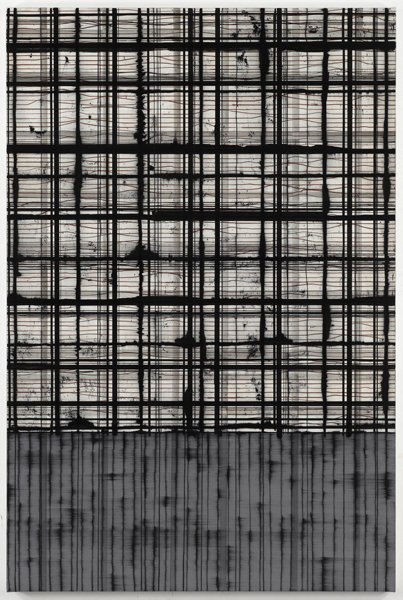 This will be Mark Francis’s first exhibition at Kerlin Gallery since his highly acclaimed solo show at the Hugh Lane, Municipal Gallery, Dublin, in January 2008.

Francis belongs to a generation of primarily non-objective painters whose formal repertoire nevertheless draws considerable sustenance from a wide range of previously unavailable images now in general circulation due to the invention of the electron microscope as well as notable advances in telescopic technology. In Francis's case the obvious associations between microscopic images of spores and sperm and the fundamentals of creation, allied to an avid personal interest in mycology, clearly informed the paintings for which he first gained recognition in the early 1990s. The introduction of the ‘grid’, and its development within his painting to encompass a richly suggestive array of networks, maps, road and rail systems, established an enlivening dynamic between the notion of order and apparent disorder and between the man-made and the natural.

In the new set of paintings, Francis explores the grid format in a much more obvious fashion. Formerly it has always appeared, through the brushing in vertical and horizontal marks, subtlely in the background. The more evident appearance has come through inspiration from sound graphs, musical notation and astronomical diagrams such as spectrographs. It is, as if the artist has turned the paintings inside out, to reveal a more robust structure rather than the paintings previous veiled softness.

Francis’s other solo exhibitions include the City Art Gallery, Manchester, in 1995, Mary Boone Gallery, New York in 1997, Maureen Paley, London in 2000, and a retrospective exhibition at Milton Keynes Gallery in 2000. He was included in the much debated exhibition of art from the Saatchi Collection 'Sensation', at the Royal Academy in London and the Brooklyn Academy in New York, and in the touring exhibition 'Absolut Vision: New British Painting in the 1990's'. He is represented in the collections of the Irish Museum of Modern Art, the Tate Gallery, London, the Victoria and Albert Museum, the Saatchi Collection, the Metropolitan Museum, New York, the de Young Memorial Museum, San Francisco, the Museum of Modern Art, Miami, and Dublin City Gallery, The Hugh Lane.

In Spring 2010 Francis will have a major exhibition at the prestigious Abbot Hall Art Gallery, England.