Shilpa Gupta creates artwork using interactive video, photographs, objects, sound and public performances to examine such themes as desire, religion, the psychology of fear,and notions of security. Kendell Geers explores a world whose foundations, beliefs and ideologies are disintegrating. He attemps to engage a struggle with life, a struggle in which life experiences are taken to the extreme. 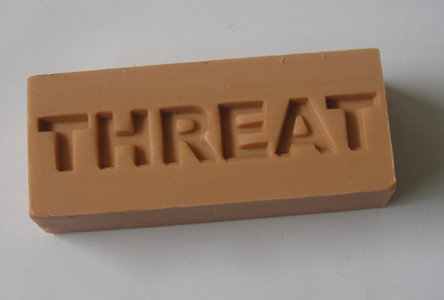 Yvon Lambert - Paris is pleased to announce its first solo show of Shilpa Gupta (b 1976). Gupta is from Mumbai (born and lives), a city ripe with racial and religious diversity, factors that play key roles in her art. Gupta, thought of as one of the most talented young Indian artists, creates artwork using interactive video, photographs, objects, sound and public performances to examine such themes as desire, religion, the ʻpsychologyʼ of fear,and notions of security. Gupta has always been concerned with our vision of the world today, and uses interaction as a means to invite the viewer to participate in exploring this, such as in her work on show entitled ʻThreatʼ. In this sculpture piece, hundreds of pieces of soap have been embossed with the word ʻthreatʼ and viewers are invited to take a piece of soap home to be used.

Over the years, several of Guptaʼs projects have touched on the border crisis between India and Pakistan, and the resulting loss of life in Kashmir. In the video installation ʻHardly bear to Speakʼ, on show currently, four monitors show the portraits, which are vibrating, of the four judges who were appointed to determine the division of India and Pakistan. The relationships were so tendentious, however, that the judges “could hardly bear to speak to each other” which created deadlock. Guptaʼs empathy towards the situation in Kashmir is markedly evident in many of her pieces, however her approach to the subject of war is universal, and the viewer is often able to relate to her pieces in terms of all conflict in the world.

Shilpa Guptaʼs work travels easily across cultural borders and she has already shown at some of the most important biennales and trienniales in the world. Guptaʼs work is tenacious and thought provoking, as she permits the more dangerous contents of the mind, as well as private and collective fears, to take form as art. Shilpa Gupta is on display in September 2009 at the Lyon Biennale, the Essl Museum, Austria in the exhibition Chalo! India, and at the Louisiana Museum of Modern Art, Denmark in the exhibition The World is Yours.


Yvon Lambert - Paris is pleased to announce The Waste Land, the second exhibition by Kendell Geers at the gallery. The show will run from September 11th to October 15th, 2009.

T.S Eliot's poem The Wasteland ( 1922) has much inspired Kendell Geers. A dark elegy Eliot's The Wasteland is a revolutionary poem whose very form leaves the reader puzzled by changing register, subject, place and time, pushing further the borders of traditional expression to create a new world of its own. Half-way between satire and prophecy, the poem questions the sources and references of modern society, which is nothing, to Eliot but a Wasteland.

Kendell Geers has adopted the poet's verses, who abruptly provokes his reader : "You know nothing? Do you see nothing? Do you remember Nothing?". Geers explores a world whose foundations, beliefs and ideologies are disintegrating. He attemps to engage a struggle with life, a struggle in which life experiences are taken to the extreme. The violence of Geers’s work, however, is not intended to submit the visitor to his views. On the contrary, the visitor is left free to accept or reject the proposed experience. "I try to create places where visitors must accept the responsability of their presence in the art work. Of course, they are always free to go away or to go on, but if they decide to take part in my work, they become active viewers… Danger is always something present in all my works."