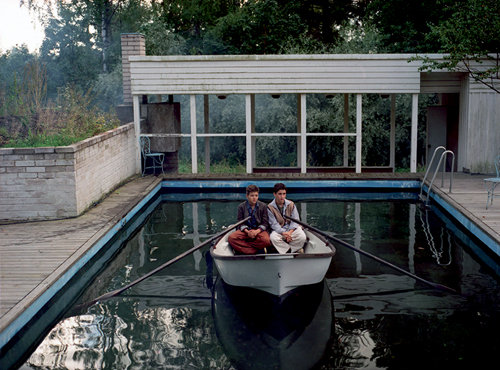 Contour vzw is pleased to present the 4th Biennial of Moving Image. Entitled Hidden in Remembrance is the Silent Memory of Our Future, the exhibition is curated by Katerina Gregos, who invited 18 international artists working with film, video and lens based media, many of whom have produced new work for the Biennial. Contour 2009 comes at a timely moment to consider recent history, as it takes place twenty years after a key date in twentieth century history, 1989. The European map has changed considerably since then, as have the geopolitical situation, cultural values and traditional notions of identity; post-1989 euphoria has now evaporated. The necessity to negotiate the present, through an understanding of the past is becoming more entrenched in historical theory, overthrowing ideas about the 'end of history' and the dominant culture of 'presentism'. Mechelen, itself a city steeped in history, seems the perfect place to engage such questions.

Contour 2009 will revolve around questions of historical representation and historiography, will explore how historical narratives are constructed, and will engage in a process of historical re-evaluation demonstrating the increased importance of historical context in a large segment of contemporary art practice. The biennial will not be governed by an overbearing curatorial concept which instrumentalizes artistic practice under one rubric, but will allow room for artists to present multiple perspectives on the chosen theme – whether social, political, cultural or personal - perspectives that will shed light on the 'jigsaw that is history', as the historian E. H. Carr famously called his discipline. Thus the biennial will not be an exhibition about a specific historical period or subject, but rather a series of reflections on different aspects of the historical and historiographic, relating to our modern past. Likewise, the exhibition will not be constructed as a linear narrative but will consist of autonomous chapters or short stories, which may or may not connect to one another.

The artists participating in the biennial take recourse in the past to re-frame the present and to demonstrate the complex and often persisting entanglements between past, present and future. They highlight how the residue of history affects our perception of the present as well as our imaginings of the future. Employing a variety of narrative strategies, they reflect on memory and the passage of time, often creating distinct 'chronotopes' of their own. Their work foregrounds practices of retrieval, researching, referencing, recycling and finally interpreting historical material anew, often to dismantle the authority of dominant historical narratives, or to bring to the fore repressed or peripheral ones.

How does one deal with the spectre of history and the ghosts of the past? How is history written and by whom? Whose history is it? Contour 2009 advocates the importance of history in our age of forgetting. To quote Eric Hobsbawm, one of the greatest historians of our time, "History alone provides orientation and anyone who faces the future without it is not only blind but dangerous, especially in the era of high technology". In any case, an understanding of history – or histories, as is perhaps more correct a term - is paramount as it entails an understanding of social and cultural being.