These works continue Cesarco's investigation of the narrative and affective possibilities of conceptual art. Both films are re-enactments or translations which push the resonant limits of narrative, enacting processes of remembering and forgetting. 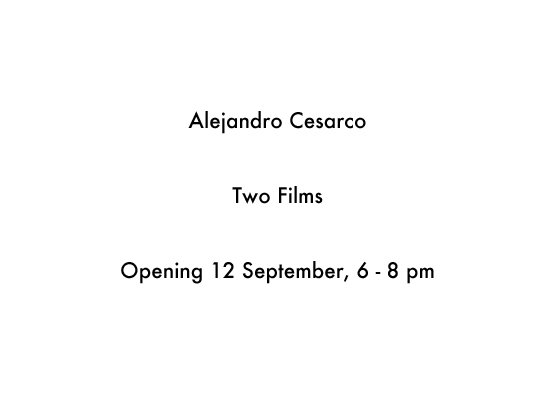 Murray Guy is very pleased to present a solo exhibition featuring two new films by Alejandro Cesarco, on view from September 12 through October 24, 2009. Please join us for an opening reception on Saturday, September 12 from 6 to 8 pm.

These works continue Cesarco’s investigation of the narrative and affective possibilities of conceptual art. Both films are re-enactments or translations which push the resonant limits of narrative, enacting processes of remembering and forgetting.

Everness (2008) is a looped film installation made up of five chapters: a remake of the very last scene of James Joyce's The Dead, a monologue on the meaning of tragedy, a breakfast scene, and two songs: a Tropacalista melody penned by Caetano Veloso during his exile from Brazil, and a republican chant from the Spanish civil war. The work describes ideas typically associated with youth—a first love, the loss of innocence, a sense of sincerity and political commitment. But it unfolds in an uncertainly tense domestic space that seems at once both interior and exterior, between a naïve present and an evocative past.

Zeide Isaac (2009) is a work of fiction rooted in reality, produced collaboratively by Cesarco and his grandfather Isaac, who is 94 years old and a survivor of the Holocaust. Whereas standard testimonies of survival presuppose an overriding fidelity to events, here Cesarco has written a script that his grandfather performs, as both actor and witness. As one of the last of his generation, he embodies the transfer of these narratives from first to third person. His performance is a reflection on the act of memory, and the limitations and possibilities of testimony as meaningful form.

Two new publications on the film Everness, with essays by Julie Ault and María Gainza, have been published to coincide with this exhibition and will be available at the gallery. Everness was produced with support from the Rolex Mentor-Protégé Arts Initiative, and Zeide Isaac was produced with the help of a generous grant from Art Matters.

Alejandro Cesarco was born in 1975 in Montivideo, Uruguay, and currently lives and works in New York. He will present a project this fall at the Museum of Modern Art in New York (opening December 7), and, running concurrently with this exhibition, he will have a show of new work at Tanya Leighton, Berlin. Recent solo exhibitions include Now and Then, Charles H. Scott Gallery, Vancouver (2009), and Once within a room, New Langton Arts, San Francisco (2008). In 2006, Cesarco was the recipient of an award from the Rolex Mentor-Protégé Arts Initiative, which allowed him to work for a year with John Baldessari. Together, they produced a collaborative body of work, Retrospective, presented at Murray Guy in 2007.