The question, What happens when we see?, runs like a red thread through Eli assonâ€™s work. And the main subject matter of his art is indeed our sen ses - our perceptions. We enter the gallery space, only to realize tha t we are INSIDE our own dark-room, in which we see how we see. 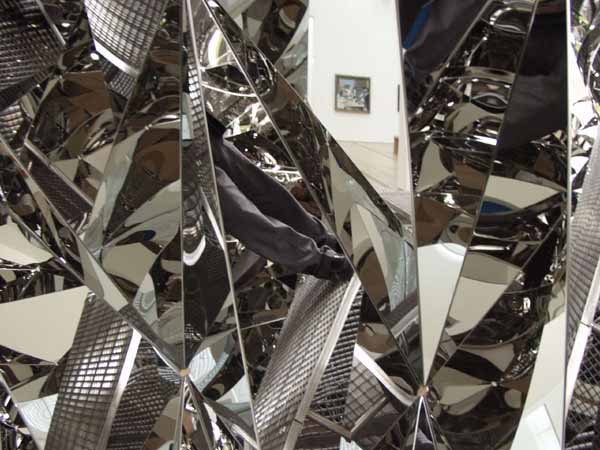 On Sunday, May 12 at 5pm, an exhibition with works by Olafur Eliasson will open at i8 gallery.

One of Olafur Eliassonâ€™s first acclaimed works was titled Spot light. In it, he made a hole in the roof of an arthouse in Los Angele s, creating, as the day wore on, a moving spot of sunlight on the floor. In this way, Eliasson managed to harness the Earthâ€™s revolution to create a sort of a sun-writing on the exhibition floor, and at the same time, turn ing the arthouse into a primitive camera - camera obscura. Commenting on his own work, Eliasson has indeed claimed that he is first and foremost interested in looking at the way we see things. In his work the gallery space is a camera in which the onlooker suddenly finds himself, so to speak, insi de his own head.

In a famous, quite desperate letter, to his fiancÃ©e, written on the 22nd of March 1801, Heinrich Kleist claims to have read "the so-called Kantian philosophy" to his profound horror. "If man had green-c oloured glass instead of eyes, Kleist writes, -he would be boun d to conclude that all the objects he regarded with these glass-eyes were gr een - and he would never be able to decide whether the eyes showed obj ects in their true light, or whether the eyes simply lent objects an essence belonging to the eyes themselves." And Kleist goes on: "And so it is with our sense of perception and un derstanding. It is impossible for us to decide, once and for all, whether th at which we call truth is indeed truth or simply something that seems to be true." The reason for Kleistâ€™s desperation is due to his belief that the above said conclusively proved that "absolute truth" is nowhere to be found; that the "so-called Kantian philosophy" showed that our perceptions are always dependent on a priori conditions, that we are only able to see that which fits into the pre-formed moulds of perception that we are born with.

Of course, it could be argued that Kleist misinterpreted Kant, who had certainly not meant to say that all truth was relative, but had simply been exploring the possible limitations of our knowledge of the world, but this is be side the point in our context. The most important thing is the question: What happens when we see.

We are inside a darkened room, we are inside our own heads. Exterior light filters through lenses that accumulate and project it onto an empty page ins ide the head. Everything sighted becomes an upside-down image on the page. M an is a camera; visible reality is a collection of pictures that we diligent ly insert, one after the other, in to the photo-album of memory. Two hundred and fifty years before Kleist wrote his letter about the green eyes of glass, Leonardo da Vinci had compared sight to a machine in which li ght filters through a tiny hole and projects pictures onto a white page in a darkened space. Admittedly the pictures produced by this machine are a bit blurry, but in 1569, a compatriot of Leonardoâ€™s made some useful obser vations on this point: In an essay, entitled "La practica della perper spettiva", Daniello Barbaro proved that the pictures would become much clearer by putting a lens in the hole. Sighs of relief are premature though , because Kleist raises both hands to heaven and points out that if the lens is green the picture unavoidably takes on the colour of green, hiding from us the "true" colour of the object.

The question, What happens when we see?, runs like a red thread through Eli assonâ€™s work. And the main subject matter of his art is indeed our sen ses - our perceptions. We enter the gallery space, only to realize tha t we are INSIDE our own dark-room, in which we see how we see. In Eliasson? 8217;s work we are present at an exhibition of pictures in our own heads. Th e arthouse is a camera and the camera is the eye that projects a picture ont o an empty page in a dark head. And the earth turns...
HjÃ¡lmar Sveinsson

Olafur Eliasson (b. 1967) is one of the most important young artists in the contemporary art scene today. Born in Copenhagen/Denmark, parents both being Icelandic, he studied at the Academy of Arts in Copenhagen before mo ving to Germany. He has had numerous exhibitions in major museums and galleries, including MOMA, and will represent Denmark at next years biennale in Ve nice. Today he lives and works in Berlin.