The title is a German word describing a 'partnership of convenience' an alliance based on an advantage, or on a spread out or specific common interest. Through the works of 22 artists with dissimilar experiences, interests and researches, the exhibition aims to explore art's ability to gather, listen, trace and pursue parallel thoughts and directions, while shedding light on distinctive situations, digging within a personal and common memory without ever forgetting to keep a threshold open for interpretation. Curated by Art At Work. 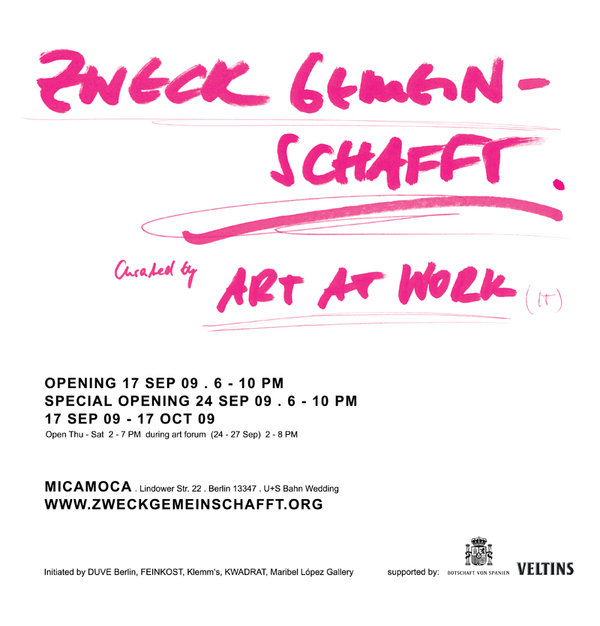 Curated by Art At Work

Zweckgemeinschaft is a German word describing a “partnership of convenience” an alliance based on an advantage, or on a spread out or specific common interest. This union could be transitory or long-lasting, determined by chance or simply by practical reasons defined by specific situations. The configuration of the three words - zweck, intention; gemein, common and schaft, handle - summarizes in one word a diffused behaviour, common to various people and situations, through a manifestly pragmatic spirit yet free from any moral implication.

Zweckgemeinschaft can be considered a word considerably far from any kind of romantic ideal embodied in a utopian imagery of existence, yet possessing a realistic base independent from any kind of conceptually defined structure. Its definition is applicable both on an individual and collective level, as many recent examples in the contemporary social and political sphere demonstrate: fragmented nations recomposed under the name of the unification of the communities, where the explicit, and sometimes legitimate practical interests represent the real reason of transformation. Since the reunification of Germany the city of Berlin presents itself as a big puzzle in incessant arrangement, composed of agglomerates that speak different languages gathered in a free territory, facing a constant economical instability yet withholding an immense creative richness.

Through the works of 22 artists with dissimilar experiences, interests and researches, Zweckgemeinschafft aims to explore art’s ability to gather, listen, trace and pursue parallel thoughts and directions, while shedding light on distinctive situations, digging within a personal and common memory without ever forgetting to keep a threshold open for interpretation.
The exhibition questions the potential strengths of the processes of creation (Schafft), association, layering, adding and subtracting, borrowing the peculiar characteristics of the German language, in its creation of concept-words. The act of assemblage and disrupting without following fixed rules and the impossibility of translating, if not metaphorically, becomes a critical and independent space to explore, cut out in a social and political situation usually imposed.
In the same way, the works presented in Zweckgemeinschafft are the result of decompositions and re-compositions on a formal and conceptual level: spaces in which to construct and dismantle, in which the individual segments do not find peace if not in their final agglomeration, ready to project and question a beyond. The unexpected, the disorders, the fantastic worlds, the spontaneous associations, developed in their silent potential state of rupture and interruption, become spaces for construction, which underline the exchange of positions between the deviated and the deviant, in the attempt to illuminate an independent and alternative direction and possible newly conceived conscious, critical Zweckgemeinschafft.

Art At Work is a collective which develops contemporary art projects and triggers connections between the different players within the system. AAW has no specific exhibition venue and each project is conceived, produced and realized in an ever-changing situation. Through constant dialogue with the artists, AAW aims to create an innovative working platform to allow the development of high standard works. On account of its structure’s flexibility and of the group’s manifold competences, AAW cooperates with public and private institutions, companies and collectors, so as to take advantage of the most efficient and diverse promotional mechanisms to diffuse its projects within the contemporary art system.
AAW is Ilaria Bonacossa, Paola Clerico, Luca Conzato, Ilaria Gianni, Riccardo Ronchi, Francesco Stocchi

For information, questions or to obtain images of the exhibition please contact zweckgemeinschafft@gmail.com