In the center of the gallery space, the artist constructs an approximately 40 foot wide, floor to ceiling structure containing three large-scale dioramas. Inspired by traditional natural history museum displays, the dioramas depicts 3 terrains - the tropics, the desert, and the North Atlantic. Traces of man-made interventions will be evident in each landscape, whose scenes will be rendered by a team of specialists from the American Museum of Natural History in New York. Additionally, a variety of quotations and texts will be printed onto the exterior of the dioramas in a panoramic calligram and will be visible upon entering the gallery. 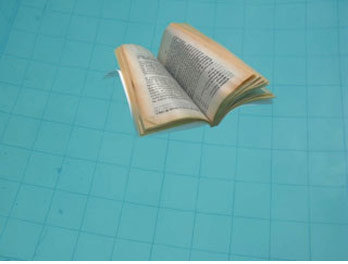 New York, NY- Dia Art Foundation is pleased to announce chronotopes & dioramas, a new project by Paris- and Rio de Janeiro based artist Dominique Gonzalez-Foerster. For this site-specific project, the third in a series of contemporary art exhibitions commissioned by Dia for The Hispanic Society of America, Gonzalez-Foerster takes as her point of departure the Hispanic Society’s internationally renowned research library. On view September 23, 2009 through April 18, 2010, and organized by Dia curator at large Lynne Cooke, chronotopes & dioramas is Gonzalez-Foerster’s first major solo exhibition in the United States. There will be an opening reception on Tuesday, September 22, 2009 from 6-8pm.

For this project, Gonzalez-Foerster has chosen to treat a 3,700 square foot gallery located within the former Museum of the American Indian as an “annex” to the Society’s main library. (Recently renovated by Dia, this gallery is located in a traditional Beaux-Arts style building reopened to the public in 2008, after a 14-year closure.) Here, the artist will augment the library’s holdings of contemporary Iberian and Latin American literature with a selection of texts, both well-known and personally significant.

In the center of the gallery space, Gonzalez-Foerster will construct an approximately 40 foot wide, floor to ceiling structure containing three large-scale dioramas. Inspired by traditional natural history museum displays, the dioramas will depict three terrains - the tropics, the desert, and the North Atlantic. Traces of man-made interventions will be evident in each landscape, whose scenes will be rendered by a team of specialists from the American Museum of Natural History in New York. Additionally, a variety of quotations and texts will be printed onto the exterior of the dioramas in a panoramic calligram and will be immediately visible upon entering the gallery.

Gonzalez-Foerster’s three topographies will each contain various forms of literature ranging across works by J.G. Ballard, Roberto Bolaño, Jorge Luis Borges, Samuel Delany, and Clarice Lispector. Books will be sited in the dioramas, like the flora and fauna specimens of natural history habitat displays, as if they were the ‘indigenous inhabitants’ of each terrain.

The “annex” will amplify the Society’s historical holdings with works that span the 20th century, offering narratives of fiction and diaspora that parallel the institution’s geographically based model of collecting.

Publication
chronotopes & dioramas will be accompanied by a softcover book which will explore the installation’s key themes through a selection of scholarly texts and full-color, documentary images. Developed in direct collaboration with Gonzalez-Foerster, the publication will be edited by Ms. Cooke and Karen Kelly, Dia’s director of publications and special programs. Among the contributors will be Spanish novelist and essayist Enrique Vila-Matas who will contribute a new text. Vila-Matas’ most recent book, Bartleby & Co will be incorporated into one of the dioramas.

Funding
Special thanks to the Hispanic Society of America. This program is generously supported by public funds from the New York City Department of Cultural Affairs; New York City Councilmember Robert Jackson; Etant donnés: The French-American Fund for Contemporary Art (a program of FACE); The Kadist Art Foundation; and Erica and Joseph Samuels. Beverages for the opening reception compliments of Brooklyn Brewery.

The Hispanic Society of America
Founded in 1904, The Hispanic Society of America is dedicated to the presentation and study of Hispanic culture. The collection, which is unparalleled outside of the Iberian Peninsula, provides deep insight into the culture and art of Spain, as well as significant representation from Portugal and Latin America. Since 1908, the Society has been housed on Audubon Terrace, between 155 and 156 Streets in Manhattan, in the Beaux-Arts complex that includes buildings by architects Charles Pratt Huntington, Stanford White, and Cass Gilbert. Comprising both library and museum, the Society has a diverse collection of paintings, decorative arts, books, manuscripts, maps, prints, and photographs dating from the second millennium B.C. through the twentieth century, and is open to the public free of charge. For additional public information, visit www.hispanicsociety.org.

Dia Art Foundation
A nonprofit institution founded in 1974, Dia Art Foundation is internationally renowned for initiating, supporting, presenting, and preserving art projects. Dia presents public programs and its permanent collection of works from the 1960s through the present at Dia:Beacon, Riggio Galleries. In the fall of 2007 Dia initiated a partnership with The Hispanic Society of America, where Dia presents commissions and projects by contemporary artists within the Society’s galleries while seeking a permanent home for these initiatives in New York City. Additionally, Dia maintains long-term, site-specific projects in the western United States, New York City, and Bridgehampton, Long Island.

Admission
$10 general
$7 students, seniors [65+]
Free for members and children under 12