Kudymkor is the Engine of the Future 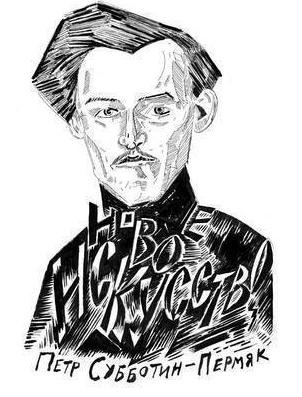 How can one represent art excluded from the mainstream of art history because it was made at too great a distance from its major museums? What is to be done with all those 'provincial' articulations of the modern in an unevenly globalized world? How should one deal with all the hybrids and mistranslations that aren't quite the right kind of modernism? 'Kudymkor is the Engine of the Future' asks these questions by examining the work of Pyotr Subbotin-Permyak, an obscure figure of the early Russian avant-garde.

The exhibition, a conceptual curatorial project rather than a traditional museum retrospective, tells a story striking enough to be fiction. Pyotr Ivanovich Subbotin-Permyak (1886-1923) was born in the distant Perm region, and trained as a traditional artist in Moscow. In the heady days after the October revolution, he fell under the sway of the early avant-garde. In 1919, inspired by his friends Kandinsky, Kamensky, and Chlebnikov, he left Moscow to bring his lofty and rather naive ideas of the new art back to his birthplace, Kudymkor, a remote village near the town of Perm. It was here, among the impoverished Komi-Permyaks, that he founded a school of new art, studios, a museum, a theater, and an ethnographic collection. Almost the entire village was involved in these ventures. In 1923, Subbotin died of tuberculosis and exhaustion, and his pupils went their separate ways: one of them became a famous socialist realist painter, another stayed in the provinces to work as an art teacher, and another still, Subbotin's favorite student, 'the deaf-and-dumb Totmyanin' moved to Leningrad, where he became the chairman of a deaf-mute community – and for that very reason, an early victim of the Great Terror in 1937.

To tell this story, curator Ekaterina Degot has enlisted the help of Leonid Tishkov, a contemporary artist and writer originally from the Sverdlovsk region, who fully appreciates Pyotr Ivanovich's boundless idealism and his old-fashioned love to art in all its pretensiousness and its simplicity. Tishkov has interpreted Subbotin-Permyak's life story in an album in which history and legend intertwine. It prefaces a traditional museum exhibit broken by curatorial and artistic interventions; quotes from Subbotin's writings appear as political slogans, conveying the pathos of Subbotin's life. A propaganda film from the Stalin-era has been intercut with quotes from Subbotin-Permyak, helping to show how some of the artist's ideas may have resurfaced in that later Soviet utopia.

The exhibition catalogue of 'Kudymkor is the Engine of the Future' includes texts by Ekaterina Degot, Leonid Tishkov, as well as an extensive biographical essay on Subbotin-Permyak's activities in Perm and Kudymkor by N.V. Kazarinova, assistent director of the Perm State Art Gallery. It is accompanied by a special reprint edition of Pyotr Subbotin-Permyak's main essay in theory 'On New Systems in Art.'

'Kudymkor is the Engine of the Future' is a special project of the Third Moscow Biennial of Contemporary Art.

With the support of: Proun Gallery (Moscow), The Subbotin-Permyak Museum of the Komi- Permyak Region (Kudymkor, Perm Region