An investigation into traditional building and the ethnographic features of the area of Os Ancares (Lugo), which will round off the collective and multidisciplinary project on the Galician landscape. The exhibition turns their images into the portrait of a precise and essential moment in time, the last breath of moral and sexual freedom brought about by the sixties, just prior to the crisis represented by the outbreak of AIDS. 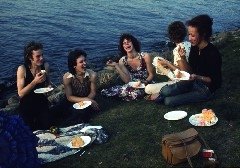 In the mid-seventies a group of artists from the East Coast of America began to challenge the conventions of the photographic medium starting from its technical and moral aspects, which had enjoyed a great influence in the uses of representation in the late twentieth century. The defence of truth was expressed by an unknown degree of exposed intimacy, which revealed modes of affection and consequently the emergence of new models of social articulation. Its fundamental contribution consists in turning uneventful motives into interesting narratives, which up until then had not been regarded as subject matters in works of art.

In the course of the nineties this group was named the Boston School after a pun by artist Nan Goldin, later popularised by the eponymous exhibition at Boston’s ICA in 1996. The fact remains that at a certain point in the mid-seventies in New England, several artists got together and went on to become some of the fundamental names in art in their country. Relating through personal affinities and by studying at the School of the Museum of Fine Arts or the Massachusetts College of Art, both in Boston, they progressively moved to New York in order to actively take part in the creation of the Bowery scene in an essential phase of development and consolidation of the city’s artistic structures.

The exhibition turns their images into the portrait of a precise and essential moment in time—the last breath of moral and sexual freedom brought about by the sixties, just prior to the crisis represented by the outbreak of AIDS. On the other hand, the vindication of the subjectivity they take part in, became one of the main axes of the international artistic production of the nineties.

In short, rather than attempting to confirm the affinities of the so-called Boston School, Familiar Feelings aims to subject the label to critical appraisal—to detect other emotional kinships and personal attitudes that will enable readers to assume the bond of familiarity as a slight and yet at once more welcoming category, one that transcends the traditional labels of art history to assert other possible and still productive modes of subjectivism.

Press and Communication Department
Arantxa Estévez cgac.prensa@xunta.es or call to (+0034) 981546632