Denise Colomb and the West Indies

From legend to reality, 1948-1958. The artist produced two major sets of photos in Martinique, Guadeloupe and Haiti, respectively in 1948 and 1958. She made her first trip out there at the initiative of Aime Cesaire, who invited her to join the celebrations for the centenary of the abolition of slavery in the French West Indies. She went back ten years later, this time on an assignment from the Compagnie Generale Transatlantique. During this second trip, she took photographs both in colour and in black-and-white. 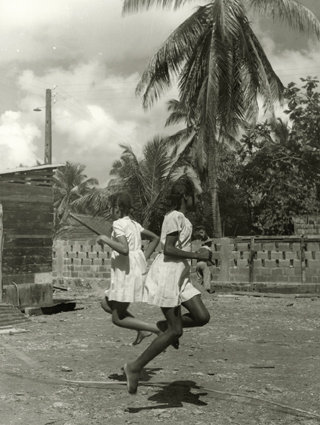 Denise Colomb produced two major sets of photos in Martinique, Guadeloupe and Haiti, respectively in 1948 and 1958. She made her first trip out there at the initiative of Aimé Césaire, who invited her to join the celebrations for the centenary of the abolition of slavery in the French West Indies (1848-1948). She went back ten years later, this time on an assignment from the Compagnie Générale Transatlantique. During this second trip, she took photographs both in colour and in black-and-white.

The ethnographic impulse
In 1948, at the recommendation of Aimé Césaire, Denise Colomb joined Michel Leiris on a mission to the West Indies. However, working with the famous ethnographer soon proved impossible. Denise Colomb carried out her assignment with absolute freedom, and her subtle way of capturing expressions and gestures, based in a sense of connection with the subject, was incompatible with the ethnographic, documentary approach. She photographed Martinique and Guadeloupe at a time of hope and reconstruction, as the two islands were developing the departmental status voted for them in 1946. Colomb described the social reality, the practices and customs shaped by an economy based on the twin monocultures of sugar cane and bananas.

Humanist photojournalism
After the trauma of World War II, there was a deep desire for the vital comfort of reconciliation. In the 1950s, a new French school of humanist photography emerged, its leading figures being Robert Doisneau, Willy Ronis, Édouard Boubat and Izis. Colomb's own inclinations were very much at one with this mood. For her, taking photographs meant giving others the chance to show their joys, suffering and doubts. "What exactly are you looking for in the West Indies?" she wrote in her personal notebooks. "Are you hoping to find a Land of Cockaigne that is all too often blandly and superficially described? A ravishing country of pretty doudous, an enchanting climate, the easy life, song and dance, idleness, beaches fringed with coconut palms? Yes, there is truth to all these clichés […] but the poverty is undeniable." Colomb recorded the daily life of the islanders with empathy, faithful to the spirit of poetic realism. By showing rather than finger-pointing, she accepted a degree of optimism.

Reticulations
The réticulations (web pattern prints) of 1948 were the result of an accident that occurred when developing a film. The strongly contrasting temperature of a rinsing tray caused the gelatine to crack, forming a random web pattern all over the surface of the strip of negatives. Colomb found the result visually interesting, and decided to print the negatives and present them as a metaphor of a country prone to severe social and racial fracturing.

Exoticism and surrealism: prodigal nature
In Colomb's work natural landscapes of mangroves, riversides, hills (mornes) and forests both dry and wet sit side by side with human cultivation. The abundant tropical rains combined with heat to produce a dense and varied vegetation of coconut palms, vanilla trees, hibiscus, mangroves and redwood, and in her writings the photographer dells on the wild and sometimes surreal beauty of nature. Denise Colomb shared this sense of wonder at the variety and profusion of tropical nature with André Breton, for whom "Surrealist landscapes are resolved in this land where no aspect of nature has been controlled."

Illustration and colour
The allure of tourism and travel were the themes of Colomb's second assignment in the West Indies, the purpose of which was to generate material for the promotional literature of the Compagnie Générale Transatlantique. Colomb adapted to her task by choosing to use colour as well as black-and-white. However, she continued to eschew the picturesque. "You must forget everything, be open, receptive, empty even, in order to receive only authentic impressions," she argued.

The photographs from 1958 are very much of a piece with the ones she took ten years earlier. We find there the same subjects and the same sensibility. Presented here in the form of a slide show, however, they constitute a delicate form of realism that is a real alternative to black-and-white.

The Jeu de Paume receives a subsidy from the Ministry of Culture and Communication. It gratefully acknowledges support from Neuflize Vie, its global Partner.