The growing relevance of bicycles in contemporary art and culture 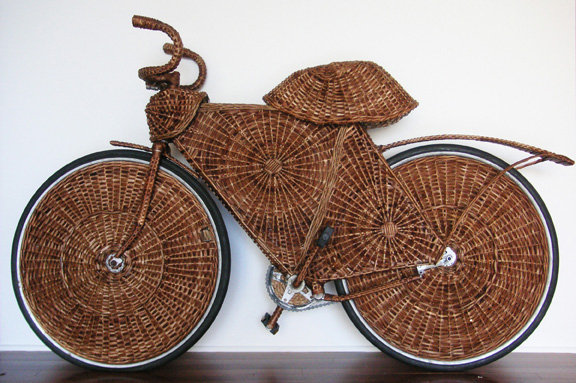 It’s a sign of the times—and our increased interest in sustainable transportation—that The Aldrich Contemporary Art Museum will debut Bike Rides: The Exhibition on September 26, 2009.

Organized by Aldrich curators Richard Klein and Mónica Ramírez–Montagut, with the advice of musician, artist, and bicycle advocate David Byrne, the exhibition explores the growing relevance of bicycles in contemporary art and culture.

The multidisciplinary project will feature approximately thirty works from around the world, including functional cycles—ranging from cutting–edge designs to populist expressions—as well as bicycle–inspired sculpture and video.

In some cases, bikes have been re–appropriated by artists and enthusiasts in the service of creating new art, such as the inflatable–toy–embellished work of Cai Guo–Qiang; the sound system speaker–adorned Pimp My Piragua of Miguel Luciano; the greenhouse tricycle of Secret School and the K.I.D.S.; the tricked–out vintage rides of the Brooklyn–based Puerto Rico Schwinn Club; the cast–bronze cycles of Subodh Gupta; and the rattan– and rubber– weave–covered work of Jarbas Lopes. In other cases, designers had function and performance in mind, creating inventive new frame shapes from materials such as bamboo, carbon fiber, and titanium. The exhibition will also feature a video by David Sowerby showing rider Danny MacAskill performing sensational bike tricks, which has been viewed nearly ten million times on YouTube, as well as three innovative bike racks that exist somewhere between fine art and industrial design.

Richard Klein commented, “As worldwide trends point to bike riding as a serious and sustainable means of transportation that is currently reshaping cities, the public’s fascination with bicycles is growing. All these works emphasize the diverse use and function of these man–powered machines that is present in different societies.”

Mónica Ramírez–Montagut agreed that the bikes on view, “represent different identities and serve new and distinct functions. Avid bike riders, amateur bike aficionados, recreational bikers, artists, cutting–edge designers, and the community at large are all reconsidering bicycles through their personal point of view: their own ideal bike.”

Sunday October 4, 2009
1 to 5 pm
Bike Fest: A celebration of all things bicycle.
At 11:30 am cyclists are encouraged to participate in
Le Tour d'Aldrich—organized bicycle rides for all abilities.