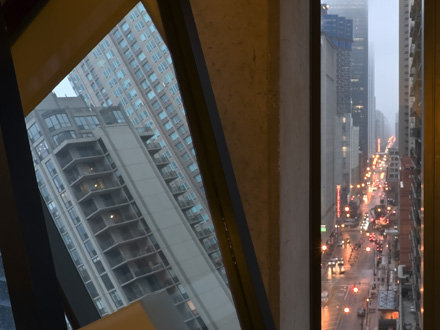 The Printemps de Septembre—à Toulouse and the Jeu de Paume present Hôtel D, an installation by Victor Burgin in two principle rooms of the Hôtel-Dieu Saint-Jacques.

Ultra-contemporary figure of the narrator, Victor Burgin develops narratives associating texts and images open to an infinite diversity of meaning.

His video/sound installation in the Chapelle and the Salle des Pélerins in the Hôtel-Dieu offers the visitor an experience of the place evocative of his own, inviting them to share his impressions of it with a to-ing and fro-ing between words and images.

The installation consists of digital images of the Salle des Pèlerins projected in the space in which Burgin made them, and a related ‘voix-off’ in the adjoining Chapel. Burgin offers the visitor an evocation of his own experience of the Hôtel-Dieu, and an invitation to allow their own impressions of the place to enter the play between words and images in the coming and going between the two rooms.

What does the festival’s subtitle “There, where I am , does not exist” lead you to think of?
Victor Burgin: First of all it directs my attention towards the temporal dimension of a “spatial” experience. Heraclitus famously observed that you cannot bath twice in the same river—the place where I am now, even as I speak, passes perpetually into non-existence. The implied “I am there” also suggests the spatialization of the ego, and the self-alienation at the core of identity which Lacan noted in his concept of the “mirror stage”—so the implied “that’s me, over there” may also invoke Rimbaud’s “I is an other”.

According to you, what can art accomplish?
Victor Burgin: The answer to this question will differ according to history and geography. In the West, and during the 20th and 21st centuries, I think that the most important work that art can attempt is to provide alternatives to the hegemonic popular common sense created by industrialized mass culture and propagated by the media. That is to say, to support the exercise of one's own intellectual and sensual faculties, without ceding to pressures from outside.

Hôtel-Dieu Saint-Jacques
2 rue Viguerie 31300 Toulouse
Opening times
Monday to Friday, from 12 noon to 7 pm
Saturdays and Sundays from 11 am to 7 pm
Nocturnes
Friday 25 and Saturday 26 September, Friday 2 and Saturday 3 October, to 12.30 am