From Durer to Gober

On show 101 master drawings from the Kupferstichkabinett. Covering a span of time from 1400 to the present, with approximately 60.000 drawings as well as 250.000 individual prints and books with original illustrations, the Kupferstichkabinett at the Kunstmuseum Basel belongs among the most important collections of this kind. It comprises, among the other, drawings by the artists of Cubism, Expressionism, Surrealism as well as contemporary artists as Joseph Beuys, Andy Warhol, Georg Baselitz, A. R. Penck, Brice Marden, Bruce Nauman, Jonathan Borofsky, Roni Horn, Francesco Clemente, Mimmo Paladino, Enzo Cucchi, Robert Gober... 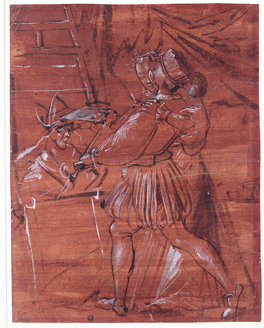 Covering a span of time from 1400 to the present, with approximately 60,000 drawings as well as 250,000 individual prints and books with original illustrations, the Kupferstichkabi­nett at the Kunstmuseum Basel belongs among the most important collections of this kind. Its origins can be traced to the Amerbach-Kabinett, the collection of Basel attorney Basilius Amerbach (1533-1591), from which large groups of drawings, predominantly by German and Upper Rhinish artists of the fifteenth and sixteenth centuries, derive. These definitively characterize the Basel collection in the realm of premodern art, and include the 300 drawings of the so-called Basler Goldschmiederisse [Basel goldsmiths’ designs], 50 drawings by Hans Holbein the Elder, 200 by Hans Holbein the Younger, 150 by Urs Graf, 80 by Niklaus Manuel Deutsch, and 50 by Hans Baldung Grien and his studio. The earliest drawing in the exhibition dates from around 1400.

From one of the studios associated with the art of the French/Burgundian court, it is a preparatory design or reference drawing in silverpoint on paper with a light green ground. Three variations of the enthroned Virgin are depicted, in which she nurses the Christ child, then, in a frontal pose, functions as the throne of Christ, and finally, caresses him. In fact, many of the drawings from this early period have the character of models. Often, they are designs, and occasionally, drawing exercises made by employees in the studios of painters, glass painters and goldsmiths. There are many examples of these among the drawings of the so-called Basler Goldschmiederisse, which can be linked to Jörg Schweiger, who came to Basel from Augsburg. However, in Martin Schongauer and Hans Holbein the Elder, two artists can be identified who drew directly from nature.

Beginning in the late fifteenth century, draftsmen, painters, carvers, copperplate and wood block engravers increasingly emerged from anonymity and signed their works. They gained a new self-conception as artists. The self-portrait of the young Hans Baldung Grien, made around 1502, is an exemplary illustration of this turn. Unlike his contemporaries Ambrosius and Hans Holbein the Younger, Baldung did not come out of the tradition of a painter’s studio, but rather, from a family of humanistically educated doctors and attorneys. Drawing now experienced a valorization–it could appear alongside painting in its ambition to create an autonomous work.

Not coincidentally, chiaroscuro drawing, the technique Baldung used to execute his self-portrait, experienced a heyday at this time. The fact that a goldsmith such as Urs Graf left an independent body of drawings, which show little connection to his proper craft, should also be mentioned in this context. One could easily speak of special cases such as Hans Holbein the Younger, who, with his complex works in traditional genres such as portraits, as well as in facade painting, which at that time was very popular on the Upper Rhine, repeatedly opened the doors to Mannerism and Baroque. After the mid-sixteenth century, only one Upper Rhine artist was able to achieve comparable significance: Tobias Stimmer, who worked in Schaffhausen and Strasbourg.

Until after the mid-sixteenth century, the so-called Strichelmanier [“stippling manner”] influenced the appearance of many drawings, but, when Martin Schongauer emerged, his style of drawing gained prevalence. In addition to tiny, finely modeled hooks, he used a system of hatching for elaborating garments and areas of light and shadow–an idiosyncrasy that would have a lasting effect far beyond the region of the Upper Rhine. By contrast, Hans Holbein the Younger preferred the line and wash drawing. For their part, the Swiss artists Urs Graf, Niklaus Manuel Deutsch and Hans Leu the Younger show a marked tendency to a calligraphic style, also characteristic of the artists of the so-called Danube School.

While, in the realm of drawing, the seventeenth and eighteenth centuries are not necessarily the collection’s strong suits, several artists are nevertheless outstanding. These include Matthäus Merian the Elder; from Germany, Matthias Strasser; from France, Thomas Blanchet; and from Switzerland, Johann Heinrich Füssli, Anton Graff, Caspar Wolf, and Adrian Zingg. Furthermore, the Kupferstichkabinett maintains a rich collection of drawings by German and Swiss artists of the nineteenth century, all the way through Arnold Böcklin, who is represented with an important group of drawings.

The large inventory of pages from Paul Cézanne’s sketchbooks leads across into classical Modernism, to the artists of Cubism, Expressionism, and Surrealism. Representatives of the so-called Art informel proceed to the 1950s and 60s. In the realm of more recent and contemporary art, the collection maintains substantial complexes of works by Swiss, German, Italian, and American artists, including Joseph Beuys, Andy Warhol, Georg Baselitz, A. R. Penck, Brice Marden, Bruce Nauman, Jonathan Borofsky, Roni Horn, Francesco Clemente, Mimmo Paladino, Enzo Cucchi, Walter Dahn, Martin Disler, Siegfried Anzinger, Leiko Ikemura, Markus Raetz, Robert Therrien, Rosemarie Trockel, and Robert Gober. Not all of the above named could be included in the exhibition. The same is true for works that entered the collection in the last ten years, to which a separate exhibition will be devoted.

The exhibition will be accompanied by a catalogue (German and English), featuring reproductions and commentary for each of the drawings. The catalogue is published by Hirmer-Verlag, Munich, and costs 59.– CHF, ca. 42.– Euro.