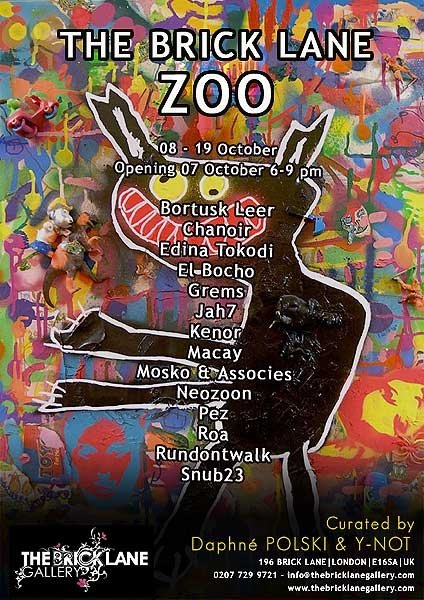 Curated by Daphne Polski and Y-NOT

The Brick Lane Gallery is proud to present “The Brick Lane Zoo” where exotic and wild animals fresh from the city streets cross the globe to showcase at The Brick Lane Zoo.
15 international Street and Urban Artists from the UK, France, Spain, USA, Argentina, Belgium and Germany come together under one roof armed with spraycans, paste ups and stencils to unleash their wild beasts into our urban jungle. Feral animals will roam the gallery walls and stray between the visitors. The upper canopy will be adorned with a striking array of animals ranging from skeletal rhinos and grizzly bears to happy fish.
Combining the exceptional talents of our street artists the walls of the gallery will come to life.

BORTUSK LEER
The fruit of forbidden love between a Lion Tamer and a Candy floss seller Bortusk Leer was forced to find his own way in the Socialist Republic of Slovenia. Though his early years are shrouded in mystery (some say circus some say tractor barn) by his teens, Leer could be found joyfully daubing the walls of his homeland with fantastical-childlike characters, psychedelic vermin and inhuman collage. Art comedy was born and Leer never looked back, particularly when being chased by the secret police with big-headed pictures of Lenin streaming out behind him, always sporting the trademark Top Hat and Cane he had won wrestling a Turk on the quay of Messina.
Future projects include standing on the spare plinth in Trafalgar square on his hands whilst juggling 4 monkeys wearing fez hats with his feet and an animated TV show for the BBC.

KENOR emerged as a street artist during the eighties’ Barcelona, shares “colour, life, eyes, clouds, parallel worlds, dreams, hope, illusion, the town, corners, the smell, laughs, light, touching with your eyes closed". The protagonist falls, capable of choosing and imagining a different dimension that helps him grow. Visions that suggest the exploration and exit of the world, recreating spaces of freedom and opening windows, gives life to destruction decorating cities until the end.

EDINA TOKODI “green graffiti” brings natural materials into public spaces, her creative process informed by the given environment. The notion of these pieces represent an absence of the natural in our everyday lives that causes an imbalance to our relation to our territories.

PEZ, or Fish in Spanish started tagging on the outskirts of Barcelona in 1999 and his letters soon evolved into his now famous smiling fish. The funny character’s goal was to send good vibrations to people walking in the streets and soon its family grew into a huge smile of giraffes, demons, angels and aliens. Visitors should not however be lulled into a false sense of security by Pez’s happy smiles and take caution when approaching the gallery staircase. Dangerous animals lurk in the basement underground…

Belgian artist ROA uses a mostly black and white palette allowing him to spray in the same way that he sketches. He enjoys neglected spaces, old factories and deserted buildings, uncovering the beauty, rich textures and histories on offer. He integrates animals into the surfaces in disrepair, playing with the environment to create an (un)appropriate answer to the space. Roa invades the city with over-scaled almost decomposing animals whose proportions demand attention.

NEOZOON
The worldwide phenomenon NEOZOON, is also the name of an art group which has until now been known for their actions performed in public spaces. The founding concept of their work is the relationship between animal and human in their own habitat: a western urban living space. Second-hand and discarded animal skins both supply NEOZOON with their source material and represent the basis of their research.
This waste product is re-evaluated by going through a treatment process and by then being subsequently put back out on the street. In this case, the city serves as the field of experimentation which is used to trace how modern society deals with both dead and living animals.
You could refer to this as upcycling, but it might just be evolution.

SNUB23 is a graphic revolution fighting the uninvited visual invasion of commercialism. Inspiration is fired by frustration; emotion becomes a plan of attack. Anger is the weapon, and any object the ammo in the fight against the optical overload.High impact graphics are used to make a statement on anything from backdrops for parties to album covers, clothes, toys, and then back out on to the streets. The artist experiments with new techniques to produce diverse works using stickers, paste-ups, stencils and freehand spray paints.Coming into being in the 1990’s, SNUB23 is the alter ego of a graphic designer, inspired by fictional robot Hammerstein. As part of the Grafik Warfare Collective and as a solo artist, SNUB has exhibited and painted at events across Europe, growing a glowing reputation with every new piece. SNUB is prolific and unstoppable, and ultimately synonymous with a future technology gone bad.

RUN DONT WALK
Frederico Municho graphic Art is a mix of all of his influences - A crude aesthetic that relies on graphic techniques such as silk screening and stencils. Since mid 1990’s, his been the art director for Buenos Aires indie label Ugly Records, grinding his teeth through the music and visual underground scene.
In late 2001 Argentina collapsed into a never seen crisis, with 6 different presidents within a few weeks. During this time Frederico was introduced to the stencil movement that was just emerging founding the street art collective Run Don’t Walk. This new movement got documentation in two books: “Hasta la Victoria, Stencil” La Marca Editora, Buenos Aires, 2004 and @1000 Stencil” La Marca Editora, Buenos Aires 2007.Since 2008 he was invited to Banksy Cans Festival in Central London.

GREMS:
Artist with multiple facets from graffiti artist to graphic designer, rapper, producer, brand director, autodidact… his biggest quality is no doubt his ability to assemble and surround himself with the best. Don’t try to categorise him, he is uncategorisable, incomparable…
Having graduated from the “Beaux Arts” in Bordeaux and child from the Silverbridge editions alongside Julie Susin, Roberto Orth and Jason Rhodes, he exhibits worldwide: Georges Pompidou in Paris, Laboratori Arte Alameda in Mexico, Galerie Parcour in Pekin… and then turned to graphics. In 2007, he produces the campaign “Imagin R” for the RATP; collaborates with numerous prestigious brands such as Nike, Artoyz, Oxbow and Six Pack… does the front cover of magazines such as Graffity Art or l’Humanité. Then, in 2009, he creates two watches for the Swatch collection as well as the watch for the Club Swatch in limited edition.

CHANOIR
In 1996, he enters head first in the Parisian post-graffiti culture by creating his emblematic alter-ego “Chanoir”. He then goes on to invent the systematic metamorphosis of his logo.
Influenced by his father who is a painter, Alberto studies at the ENSBA beside Jean Michel Alberola.
Important protagonist in the graffiti scene – he creates a bridge between Paris and Barcelona with the collective 1980 and paints large collective frescos in town centers with old schoolers DTY or the “Ovejas Negras”.
He immortalizes the golden age of street art in the documentary “murs libres”. In 2006, at gallery Quinta he presents “memoires d’un monde sans fin” with themes such as world disenchantment or cultural chocks. Back in Paris, he re-assesses his work as a collector and proposes “the kings of petrol” in 2007 at the gallery Loraine Baud – a painting composed of American imperialist toys and Cesar masks.

MACAY
Macay has been working in paper collage since 2001, coming from a Fine art background at not being happy with the classic standards in arts; she began working at the street in 2005 making suits for street dogs on the streets of Santiago her hometown and pasting silk screen printings drawings. Since 2007 she has been pasting photocopies and drawings in the street as a support for her stories collages talking about unreal landscapes and nature mixed with half human / half animal’s characters living all in a colorful environment. Macarena moved to London from Santiago, Chile in 2008 to study MA Fine Art at Central Saint Martins. Since then she has been fulfilling London street walls with her colorful collages.

MOSKO ET ASSOCIES
Urban painters, Mosko and Associes, started their activity in 1989 in the area of the Moskowa in Paris. Confronted to the desolation of an area in complete mutation, the playful alternative became an evidence.
Partners with variable geometries, and punctually reinforced by the presence of other artists, the animal theme is aimed at all types of people, social classes, cultures and portrays an image of freedom and happiness.
The technique is that of the stencil which offers a quick execution, multiple usage and polychromic approach but for the past few years works on various supports have come to complete the street pieces.