Mon-Fri 10 am-6 pm, Weekends by appointment only

An exhibition of exquisite drawings by modern and contemporary masters, including Pablo Picasso, Henri Matisse, Marc Chagall, Salvador Dali, Christo, Alexander Calder and Keith Haring. The show also includes a Salvador Dali, 'Composition Au Cygne et a l'Elephant' (1947), which is linked to a project of collaboration with Walt Disney in 1945, and works by Henri Matisse from the 1940s and Marc Chagall in the 1950s. 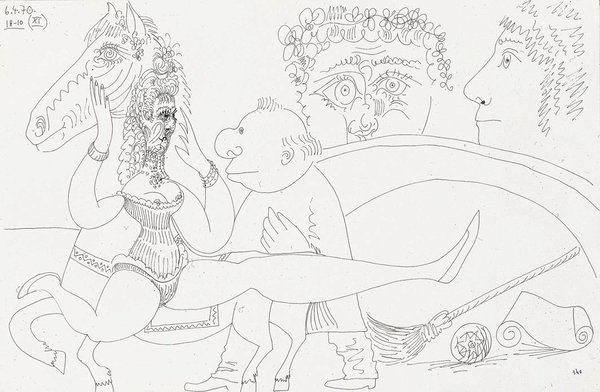 Olyvia Kwok is to present an exhibition of exquisite drawings by modern and contemporary masters, including Pablo Picasso, Henri Matisse, Marc Chagall, Salvador Dali, Christo, Alexander Calder and Keith Haring at her London gallery in October. “Black on Paper” heralds the expansion of Olyvia Oriental, a gallery specialising in contemporary Chinese and Asian art, into Western modern and contemporary art. To emphasize this extra dimension of the gallery, it will be re launched as Olyvia Fine Art.

L'écuyère (illustrated) was originally part of an important sketchbook of thirty Picasso drawings, which was subsequently split up. As Picasso’s biographer, John Richardson, has observed, “Old age is the principal theme of these dazzling drawings, in which the sardonic artist allegorizes ruefully but never self-pityingly the humiliating plight of an eighty-nine year old lothario with a burnt-out libido. The resultant images are dream images. As in a dream, everything - time, place, identity-is in a state of flux.

Especially relevant to this sketchbook is the fact that at the age of fourteen, Picasso took as his first mistress an equestrienne called Rosita del Oro, and that, a lifetime later, she reappears in different guises, first of all in his prints and then, as here, in his drawings. ...(In L'écuyère) Rosita has aged into an over-made-up virago, who does the splits while berating a craven-looking Picasso for failing to clean up the circus ring with his broom.”

Also included will be a Salvador Dali, Composition Au Cygne et a l’Elephant (1947), which is linked to a project of collaboration with Walt Disney in 1945, and works by Henri Matisse from the 1940s and Marc Chagall in the 1950s.

Since 2005, Olyvia Kwok’s name had been synonymous with the Chinese art boom in the West. As she says, “I am interested in emerging markets and I saw an opportunity to bring little known Chinese contemporary artists into the international arena and this has been highly successful. Four years later, it is usual to see Chinese art in the major contemporary art galleries and, whilst I will continue to focus on this, I am looking to find other areas where I can see growth. I see a demand from China for modern and post war Western masters, specifically from Chinese bankers and museums. It seems to me that a slightly subdued market is an ideal time in which to appeal to new collectors, as well as established connoisseurs.”

Whilst much less expensive than oil paintings, drawings can take the viewer closer to the mind and working methods of the artist, providing a stepping stone to collecting modern art. At the last Impressionist and Modern art sales in London modern drawings proved exceptionally sought after in spite of the current economic crisis.

Editor’s notes: Olyvia Kwok ran a Swiss art fund at the beginning of this decade, during which time she focused on emerging markets. Initially specialising in modern European art (70%) and post war contemporary (30%), she anticipated market movements and changed the emphasis of the fund to post war and contemporary (70%) of which 95% was work from the emerging market, specifically focusing on Chinese contemporary art. This made a substantial return two years later.