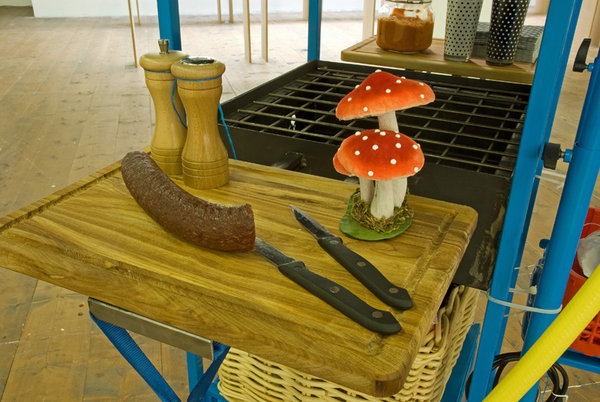 How do people organise their space? Or do they allow themselves to be organised? How do unregulated private initiatives contribute to the development of a city? Are there any guidelines, and when do the upholding of public order and legislation start to impact this process? The exhibition 'Soft City' presents existing and new work by the international artists Azra Aksamija, Pushwagner and Dubravka Sekulić. Their work represents the extreme ways in which people create urban (living) space. And how the authorities play a role in this, or, in contrast, are completely sidelined. Their work shows attention to the mental, psychological and socio-economic consequences of this process.

In his graphic novel 'Soft City' (1969-1975), the controversial Norwegian artist Hariton Pushwagner (1940, Oslo) sketches standardised daily life in an Orwellian city. With compassion, a sense of the absurd and an occasionally satirical outlook, Pushwagner follows the life of the residents. This is the first presentation of his work in the Netherlands.

The exhibition 'Soft City' shows the specific way in which artists depict the mental, psychological and socio-economic effects of how people are organizing or are being organized.

Pushwagner
In his key work, the pictorial novel 'Soft City' (1969 - 1975), the controversial Norwegian artist Hariton Pushwagner (1940, Oslo) describes the standardized daily life in an Orwellian, dystopian city. With compassion, feeling for the absurd and a sometimes satirical view, Pushwagner perceives the life of a family in a top-down organized city.
Website Pushwagner http://www.pushwagner.no/?id=1%E2%8C%A9=2

Azra Aksamija
For four years Azra Aksamija (1976, Sarajevo, Bosnia-Herzegovina) observed ‘Arizona Market', the largest black market in the Balkans, which grew into a settlement with 2200 companies, 65 bars and 7 nightclubs. She describes this city as a bottom-up "bizarre body, surrounded by minefields and ruins". Impressed by the vitality of the residents and their ability for self-organization, Aksamija created ‘Arizona Road' (2002), an installation consisting of video registrations and architectural interventions for the benefit of a flexible urban development. In addition to ‘Arizona Road' Aksamija also shows the brand-new work ‘Contraption' (2009).
Website Azra Aksamija http://www.mit.edu/~azra