The artist presents 7 series created in the period from 2006 to 2009. With newspaper cuttings, fabric, photographs, embroidery, glitter, and yarn glued layer-on-layer, Roepstorff's images are every restorer's nightmare. Contemporary 6 international artists who in one way or another has worked with the "I - Land" concept, presents installations, sculptures, videos and photos moving between the extremes of imprisonment and freedom. 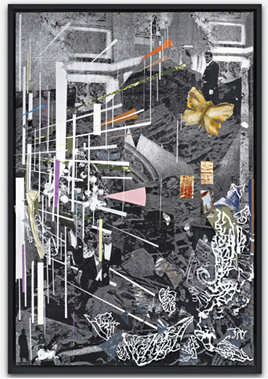 With newspaper cuttings, fabric, photographs, embroidery, glitter, and yarn glued layer-on-layer, Kirstine Roepstorff's images are every restorer's nightmare. But the visual universes created by using materials from very different contexts are unusually challenging to explore, as you will find hidden existential discussions in between the many material layers.

"Appropria-arrangements"
Roepstorff's preferred media are painting and collage, which she explores in a both innovative and original way. She calls her collages 'appropria-arrangements', the works consist of visual materials such as newspapers, books and magazines which the artist puts together in new ways.

Nuit : Sun. forms of beneath
For the exhibition at Kunsthallen Brandts Roepstorff presents seven series, created in the period from 2006 to 2009: One Hand, The King is Dead, Where the World Wander – The Road to Excelsior, Rocks, It's Not the Eye of the Needle that Changed, History of Anthropology and Humankind and Rainbows.

The seven series show the scope of her artistic spectrum, and in the works on show she discusses topics such as gender- and power politics, sociality, individual versus society, our common history and collective memory.

Primary forms
"In this exhibition, where I present seven series of collages, the first term that springs to mind is primordial forms – regarded as a somewhat abstract term: It can either be a concrete object, such as the rock or the king, or it can be an energy in the form of a feeling or the presence of a particular sensibility such as joy, sorrow, anger, or jealousy which, in me, can become a shape or an entity. I work by collecting what I regard as forms from our shared image bank, our common historical frame of reference and then process them, shoot at them from different angles. I comment on the images which represent our primordial emotions". (Kirstine Roepstorff, interview by Christine Buhl Andersen, KØS, in the exhibition catalogue)

About the artist
Kirstine Roepstorff (b. 1972) is among Denmark's most important, younger artists. In recent years she has positioned herself as one of her generation's most significant and has early on established an international career. It is the first time Kirstine Roepstorff exhibits at a larger scale in Denmark.

Kirstine Roepstorff graduated from The Royal Danish Art Academy in 2001. She lives and works in Berlin.

The exhibition opens Thursday, October 8, 2009. Opening speech will be held by the artist FOS.
Kunsthallen Brandts publishes a richly illustrated catalogue for the exhibition.

Kunsthallen Brandts have invited six international known artists who in one way or another has worked with the "I – Land" concept. The exhibition will open at Kunsthallen Brandts on September 18th. It will close on April 11th 2010. Hereafter it will open on May 7th at the Fuglsang Artmuseum on Lolland, where it will be shown during the summer of 2010.

Ross Sinclair has build an installation "Journey to the Edge of the World – The New Republic of St. Kilda", about the small island in the Atlantic Ocean that was for hundred of years inhabited by descendants from Norwegian Vikings. Discovered by Scotland in 1800 they shortly afterwards got problems living in their old manners and in 1929 the last inhabitants were evacuated from the island. Ross Sinclair makes an attempt to recoloniation of the island.

Antti Laitinen builds an island for himself in the videos and the photos of "Its my Island". He makes three attempts on different types of islands: one is very Nordic with a furtree, another is build with a palmtree and the last he made from ice – and it is long gone. Laitinens work are inspired by the tradition of landart and performance.

Amy Cutler is well known for her surrealistic adventure narrations concerning mainly the life of women. In this exhibition her sculpture "Alterations" are shown. Here we meet groups of women totally occupied with knitting or weaving with string tied between them in a mysterious pattern.

Bill Burns is working with a serious problem. He is concerned with the life of the prisoners on a prison island: how do they survive. What kind of clothes are they wearing, what do they eat, do they listen to music or pray. Do they have to stay there forever.

Andreas Schulenburg has build three very tall islands with a palm tree, a rock and a volcano. All made from soft materials like felt. Schulenburg is fascinated with the absurd, with opposites and with our different ways of experiencing reality.

Tim Silver shows a photographic series "The Tuvaluan Project". The low-lying islands of Tuvalua are a watery barometer for rising sea levels resulting from global warming. Silver plays with a range of stereotypical references to consumption, quite literally from cannibalism to the ubiquity of photography – from documentary through to tourist brochures.