Morality is a provocative theme that aims to open a dialogue vis-a-vis the world that is now determined by the experiences of war, displacement, political and economic crises, the rise of religious fanaticism, sectarianism, and the radicalization of seemingly old doctrines and ideologies. The program comprises diverse interrelated group exhibitions featuring over 50 international artists, a symposium, a film cycle, a performance program, a web platform and a book. Parallel to this four interventions on Witte de With's front under the title Between You and I. 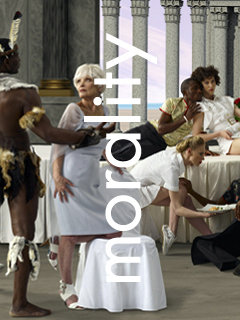 From the Fall of 2009 until the Summer of 2010, Morality will be the leitmotif for an assemblage of connected projects that have been divided into several acts. The program comprises five interrelated group exhibitions featuring over fifty international artists, a symposium, a film cycle, a performance program, a web platform and a book. Parallel to this, Witte de With and SKOR (Foundation Art and Public Space) will commission four interventions on Witte de With's façade under the title Between You and I.

Morality is a provocative theme that aims to open a dialogue vis-à-vis the world that is now determined by the experiences of war, displacement, political and economic crises, the rise of religious fanaticism, sectarianism, and the radicalization of seemingly old doctrines and ideologies. Morality is also a broad subject that affects everybody in many different ways. From the bathroom to the parliament, there is a total field of social engagement in which morality functions without boundaries, between a set of abstract, intangible and general ideas. Morality is neither a base nor a superstructure, but a smooth network of influences that supersedes the law, governing both regulated and unregulated social spaces, and affecting daily life in subtle, seductive, unexpected ways. Yet, there is not a unique or purely affirmative sense that one can give to this notion. A number of moral attitudes – often at odds with one another – inform the positions that we, as political subjects, assume in relation to the events that take place in our world.

Seemingly simple, but also disturbingly difficult to grasp, Morality is an ideal leitmotif for a project that seeks to explore critical points of fragmentation in everyday life. By isolating this concept, we seek therefore to withdraw it from any of the social, cultural, sectarian, religious or historical specificities within which an array of categorical imperatives are deployed in its name. Rather than presenting statements that can be perceived as being right or wrong, good or evil, the project Morality will create a space for showing a wide range of attitudes that problematize a total conception of morality, focusing on the less tangible forces and attitudes that shape common thinking and behavior.

Act I: Beautiful from Every Point of View

Act I: Beautiful from Every Point of View explores the gray space that we inhabit between images and power. Act I’s title derives from Horace’s famous aphorism of the first century BCE, “nothing is beautiful from every point of view.” Not so long ago, this statement would have seemed absurd, given the Enlightenment idea that Truth and Beauty arrive together. Today, however, Horace’s sentence is little more than a platitude, increasingly deployed in a rhetoric in which any point of view, and any action, can find its justification merely in its right to exist.
Beautiful from Every Point of View is a group exhibition that brings together a selection of works that refuse to assert an immediate, self-evident point of view on the subjects they represent. The works range from poignant simulations of the capitalist sublime, to humorous commentaries on the relationship between struggle and power.

Act II: From Love to Legal

Act II: From Love to Legal reveals the different forms that the gray area that we inhabit between images and power may take.
Exploring references to biographical, anecdotal, personal and factual histories, with Act II we want to suggest a cyclical trajectory that originates in private life, in a space and a time in which, in Barthes’ words, one “is not an image, an object”. Does this mean that there is a space and a time in which we are able to remain outside the spaces of power, truth, and morality?
From Love to Legal brings together a selection of contemporary artworks that confront such oppositions between anecdotal and factual, personal and historical, making it problematic for us to separate desire from even the most ascetic relationship to the world.

Spartacus Chetwynd (London, 1973) gained recognition with her baroque, musical and surreal performances featuring humorous image quotations from art history, literature linked to pop and folktales. The performance or two mimes entitled The Triumph of Death and King Midas are performed by the accompanying band the Princes in the Tower, and together they will perform the narratives from Cautionary Tales.
This is the first project to be developed in the framework of a performance cycle that culminates in 3 days of stage events in the Spring of 2010.
Program curated by Renske Janssen.

Between You and I: The Feast of Trimalchio by AES+F
Intervention on Witte de With's façade
10 October 2009 – 17 January 2010
Curated by Fulya Erdemçi (SKOR) & Nicolaus Schafhausen

The first intervention, The Feast of Trimalchio, is a work by Russian artist group AES+F, and will be on view from 10 October 2009 to 17 January 2010. Part of Morality, the interventions aim to re-imagine and re-negotiate the limits of public engagement with the institution.
Between You and I strives to open a space to reflect about morality today, inviting an active response by the public concerning the presence of contemporary art in public spaces.

Full program and more details available on our website http://www.wdw.nl