Behind the Iron Curtain

The Art of Socialist Realism. For the first time in Europe, an exhibition focuses specifically on narrating the art historical period of Socialist Realism in the former Soviet Union. On the occasion of the 20th anniversary of the fall of the Berlin Wall, 300 paintings are exhibited in Berlin. These paintings represent an extraordinary cross-section of the everyday life of that time and conjure up the anxieties and emotionality of artists in an atmosphere of apparent calm and determination. 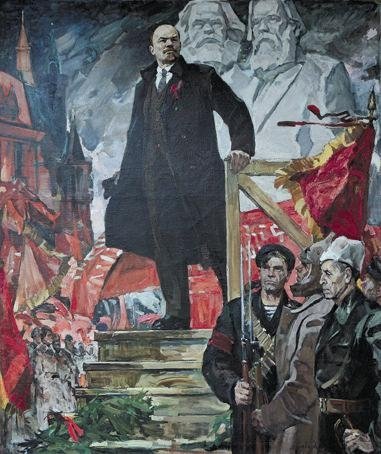 For the first time in Europe, an exhibition will be presented, which is focused specifically on narrating the art historical period of Socialist Realism in the former Soviet Union.

On the occasion of the 20th anniversary of the fall of the Berlin Wall, 300 paintings will be exhibited in Berlin. These paintings represent an extraordinary cross-section of the everyday life of that time and conjure up the anxieties and emotionality of artists in an atmosphere of apparent calm and determination.

These works are primarily representations of labor in all areas of life – in agriculture, in industry, in schools, etc. – and additionally, landscapes, portraits and history paintings of epic scenes reaching from the Bolshevik Revolution of 1917 up to works dealing with World War II. The paintings were created between the end of the 1930s and the 1980s in the U.S.S.R. and are part of a sizeable and unconventional private Italian collection, which consists of 600 works that have been collected over the years.

The purpose of the exhibition is to present this period in the absence of any political motive: “Artists in the Soviet Union were civil servants and were therefore not permitted to sell or give away their works, because these were legally the property of the state, as the patron that had commissioned them. Every artist managed to create a space, in which to express his or her humanity and world-view, despite working for the state on official commissions. Because of this, those viewers who are willing to search carefully, will find interesting elements that can be drawn from various details in the works. Extraordinary discoveries were made in the course of restoration and conservation work.

These discoveries offer sufficient evidence to prove the importance of this historical period and its art:
- The canvases are made of crude materials: mostly burlap or pieces of canvas taken from military tents and sewn together. These materials were adapted for their new function by hand on the basis of traditional techniques.
- Industrial products were not used to prime the majority of the canvases either—instead, this was done by hand with crude materials such as cement powder from construction sites or boiled vegetable oil.

Even though they were executed according to precise instructions from the political leadership of the U.S.S.R., the artworks testify to humanity and individual experience – to an extraordinary and exciting mixture of struggle, joy and sorrow. They were often carried out with an amazing mastery of technique: Special analyses have revealed that there are no preliminary drawings under the paint surface. This offers a clear proof of the talent of these artists, who maintained proper proportions and produced stylistically consistent works, even while working with a palette knife in a virtuoso painterly manner on gigantic paintings of up to 10 m2.

A large number of notes on the reverse sides of the canvases relate anecdotes about various talented artists, who had to work at other jobs in order to feed themselves and their families: an interesting and poetic trace and indication of lived history. (Excerpt from a written statement by the curators of the exhibition)

In order to conserve the works as well as possible, they were restored by accredited experts according to international guidelines on reversibility. In an official ceremony, the Italian Cultural Institute of Berlin (Italienisches Kulturinstitut zu Berlin), represented by its director, Prof. Angelo Bolaffi, will extend the painting “Mechanic”, by Matskin Ruvim Izrailevich, to the governing mayor of Berlin, Klaus Wowereit, as a gift on behalf of the curators to the city hosting their exhibition.

A catalogue with reproductions of all exhibited works will accompany the exhibition.

Jeschke - Van Vliet
Schutzenstrasse, 39 - Berlin
opening hours of the exhibition: open daily, except Tuesday, from 11am to 8pm
Admission is free