Anywhere Is My Land. The exhibition focuses on two equally decisive phases in his career: the 1960s, characterized by his ironic social critique in the form of drawings and assemblages, and the 1970s, in which he created a multimedia conceptual oeuvre. To this day Dias enjoys experimenting with a wide range of techniques and materials as he lays bare an endless series of semiotic levels. The show provides an in-depth introduction to the little known oeuvre of art-historical significance. 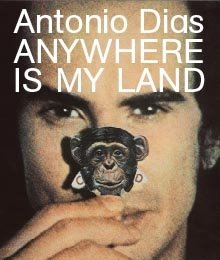 Anywhere Is My Land focuses on two equally fascinating and decisive phases in Dias’ career: the 1960s, characterized by his ironic social critique in the form of drawings and assemblages, and the 1970s, in which he created a multimedia conceptual oeuvre.

The Discovery
Since beginning to assemble the collection Daros Latinamerica has systematically assessed the entirety of Dias’ ramified oeuvre, and in the course of the research discovered a unique complex of art-historical significance: his production during the 1960s and 1970s, which might generally be assigned to the camps of Pop and Conceptual Art. The work was done mainly in Europe, above all in Paris and Milan, where Dias resided during the military regime in Brazil. Ours is the premiere presentation of this key phase in the career of an artist who is to this day a voyager among the worlds. It is no coincidence that the exhibition is entitled Anywhere Is My Land, after Dias’ 1968 painting of that name, which is political and poetic in equal amounts and of greater relevance than ever in a world that is increasingly nomadic and globalized.

Multi-referential Work
Dias’ work is distinguished by its multilayered complexity, a trait common to other Latin American artists of his generation but without a counterpart in the art production of that time in the United States, for example. His art is never one-dimensional; rather, it is always sensuous – indeed, erotic – political, socially partisan, open and playful, replete with subversive energy and sporting an ironic glint in its eye. At once born of the unconscious and driven by a powerful poetics, Dias’ multi-referential work is fostered by existential skepticism paired with a lust for life and offers rich rewards to anyone who engages with it.

Antonio Dias (born in 1944 in Campina Grande, Paraíba, Brazil) is anything but an unknown quantity, considering that his career as an artist has spanned more than 40 years, produced a significant oeuvre, and is still going strong. In numerous international solo and group exhibitions since the 1960s he has given proof of continuous artistic development, all the while resolutely resisting categorization. Dias simply will not be pinned down. To this day he enjoys experimenting with a wide range of techniques and materials as he lays bare an endless series of semiotic levels. His work is never rarefied, and he has inscribed himself with ease on the cultural scene of his native Brazil, among whose leading artists he has long since numbered.

The exhibition provides an in-depth introduction to the little known oeuvre of art-historical significance, that continually surprises and fascinates anew.