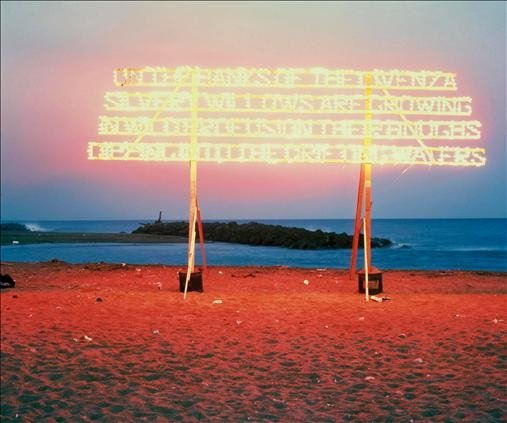 The first exhibition of the new season is also the fifth solo presentation by an artist as part of deSingel's architectural programme. It is devoted to the Welsh artist Cerith Wyn Evans. Just as for the large-scale, site-specific exhibitions by Dominique Gonzalez-Foerster (2004), Aglaia Konrad (2005), Joëlle Tuerlinckx (2006) and Heimo Zobernig (2008), Wyn Evans has, at the request of deSingel, taken his inspiration from the architecture of the site, both present and absent.

Wyn Evans' work is striking above all for its refined and coded relations with space, light and language. This is hinted at in the cryptic title of his exhibition: ". . .", or 'so to speak'. In his custom-made work, Wyn Evans uses unexpected means – luminous columns, philosophical writings, projection, reflections and fireworks – to create a polymorphous, intertextual and poetic space in which darkness emerges from light.

Firework
In his exhibition at deSingel, Wyn Evans is now emphatically adding his thoughts on architecture to his oeuvre of 'aesthetic clashes', which arise somewhere between surrealism, pre-pop art and situationist utopias. One of the works in which this is made apparent is the new firework piece 'In girum imus nocte et consumimur igni'. The title is a reference to a palindrome in mediaeval Latin which, loosely translated, means 'We go round and round in the night and we are consumed by fire'.

Luminous columns
The exhibition starts in the entrance hall with three luminous columns almost six metres tall. They are composed of several long, standard fluorescent tube-lights and represent a basic element in architectural vocabulary. In the lobby of the concert hall, Wyn Evans is installing another lit column, this time around an existing supporting column. While the ensemble near the entrance looks more like a theatrical setting, the solitary column actually becomes part of the architecture.

Neon works
The remaining works and interventions by Cerith Wyn Evans can be described as 'language become image'. Luminous neon words literally cover and describe a parallel space within an existing context. These displays look associative and poetic – quotations from scientific, philosophical and literary sources – which not only suggest an alternative spatiality, but also shift the visitor to a different mental space. The neon work newly conceived for this exhibition – a quote from a film review on the French situationist Guy Debord – is a good example: 'Permit yourself to drift from what you are reading at this very moment into another situation ... Imagine a situation that, in all likelihood, you've never been in.'

Artist's book
In his new artist's book, Wyn Evans refers to two ground-breaking publications of the last century: "Un coup de dés jamais ln'abolira le hasard – poême" from 1914 by French poet Stéphane Mallarmé, and its 1969 'translation' by the Belgian artist Marcel Broodthaers. Wyn Evans' lavishly designed tribute contains just a single sentence, the one he used for the neon work made on commission to deSingel. Each letter was cut out of paper with a laser and the words were distributed irregularly over the whole volume.

In collaboration with
mfc-Michèle Didier, Brussel

deSingel is a Flemish Community arts institution and is supported by the Province and the City of Antwerp. Main sponsor: Port of Antwerp; media