An almost chronological tour of the gifted American architect's most significant projects. 63 of the noted architect's visionary designs are represented in nearly 200 original drawings, historical and new scale models, digital animations and other contents displayed in Frank Gehry's iconic building. A singular exhibition layout reveals how the famous architect revolutionized the concept of space by designing 'from within outward'. Fifty years after the opening of the Solomon R. Guggenheim Museum in New York designed by Wright, the Museum celebrates this iconic building's golden anniversary. 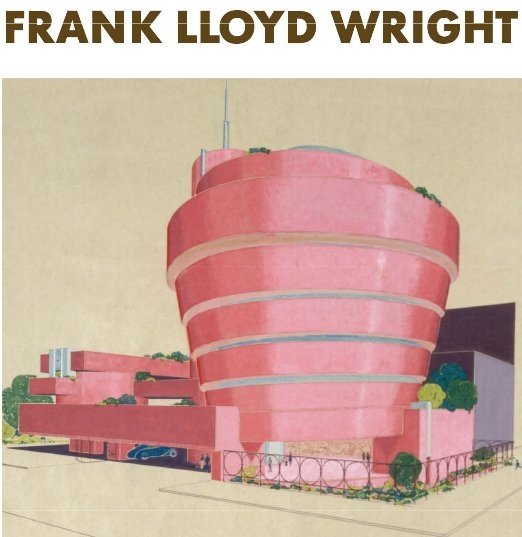 Fifty years after the opening of the acclaimed Solomon R. Guggenheim Museum in New York designed by Frank Lloyd Wright, the Guggenheim Museum Bilbao celebrates this iconic building's golden anniversary by presenting Frank Lloyd Wright, the largest and most comprehensive exhibition that Europe has ever dedicated to one of the greatest architectural geniuses of the 20th century.

The exhibition, to be held from October 22, 2009, through February 14, 2010, is co-organized by the Frank Lloyd Wright Foundation, the Solomon R. Guggenheim Foundation and the Guggenheim Museum Bilbao, with the generous sponsorship of Iberdrola. It features 63 visionary architecture projects that range from private homes and civic and government buildings to religious and performance spaces, as well as unrealized urban mega-structures.

The show's singular layout allows visitors to discover the heterogeneous nature of Wright's designs in nearly 200 of the renowned architect's original drawings together with 12 new scale models and digital animations that bring his unrealized projects to life. This comprehensive overview of his work will take on special significance in the context of a landmark of 20th-century architecture, namely the building designed by Frank Gehry to house the Guggenheim Museum Bilbao.

Taking up the entire second floor of the Guggenheim Museum Bilbao, Frank Lloyd Wright offers an almost chronological tour of the gifted architect’s most significant projects. The exhibit begins in a gallery dedicated to the designs for two of Frank Lloyd Wright’s own homes, Taliesin and Taliesin West, in Spring Green, Wisconsin, and Scottsdale, Arizona, respectively. Today they are campuses of the Frank Lloyd Wright School of Architecture. This gallery also contains an original curtain depicting Wright’s native Wisconsin landscape from the 1952 Hillside Theater at Taliesin.

Frank Lloyd Wright also has a gallery dedicated to the architect’s vision for residential projects and homes, such as his celebrated Fallingwater house (Mill Run, Pennsylvania, 1934–37) or the two homes he designed for Herbert Jacobs. Another of Gehry’s open, sinuous spaces features Wright’s ideal conception of the city and the urban environment with a display of his city planning projects, such as the unrealized Living City in which architecture and nature are harmoniously blended in spacious open settings. This gallery also contains Wright’s work on the commission he received from the city of Baghdad in 1957, one of the last projects he would ever create. Other urban designs shown here that were never built are Crystal City (Washington, D.C., 1940) and the Pittsburgh Point Park Civic Center (Pittsburgh, Pennsylvania, 1947).

Finally, the Guggenheim Museum Bilbao has set aside an entire gallery for one of the talented architect’s greatest achievements: the Solomon R. Guggenheim Museum (New York, 1943–59). His project for the museum is amply illustrated not only by his original drawings but also with archive photographs taken during its construction, the original scale model from the 1950s and a digitalized selection of correspondence between Frank Lloyd Wright and Hilla Rebay, the museum’s first curator and advisor to Solomon R. Guggenheim.

Frank Lloyd Wright also boasts three-dimensional scale models, created especially for this exhibit, that examine the internal mechanics of functional space in relation to exterior form in a variety of Wright’s projects. Among them are an exploded version of the first Herbert Jacobs House (Madison, Wisconsin, 1936–37), a mirrored model of the Unity Temple and a model of the Beth Sholom Synagogue. The models were developed and assembled by Michael Kennedy of the New York firm Kennedy Fabrications Inc., which specializes in architectural models and prototyping, and Situ Studio, a Brooklyn-based firm focused on research, design and fabrication.

Finally, a series of 3D computer animations give visitors a chance to experience an interpretation of nine of Wright’s projects. Some of these were actually built, such as his own home, Taliesin (Spring Green, Wisconsin, 1925–59), while others such as Arizona State Capital (Phoenix, Arizona, 1957) or the Central Post and Telegraph Building (Baghdad, 1957) were never realized. These digital recreations were designed by teams of students from the Interactive Spaces course, taught by Professor Allen Sayegh, at Harvard University Graduate School of Design, and from Madison Area Technical College, with the assistance of Archi Zarzycki of arc.studio.3d and ZD Studios (both also of Madison). The curatorial team of Frank Lloyd Wright includes Thomas Krens, Curator and Senior Advisor for International Affairs for the Solomon R. Guggenheim Foundation; David van der Leer, Assistant Curator of Architecture and Design, and Maria Nicanor, Curatorial Assistant, both for the Solomon R. Guggenheim Museum; in collaboration with Bruce Brooks Pfeiffer, Director of the Frank Lloyd Wright Archives; Margo Stipe, Curator and Registrar of the Frank Lloyd Wright Archives; and Oskar Muñoz, Assistant Director of the Frank Lloyd Wright Archives. Mina Marefat has served as curatorial consultant for the Baghdad module of the exhibition. The Frank Lloyd Wright exhibition installation has been designed by the Solomon R. Guggenheim Museum.

Educational programs and parallel activities
At the Guggenheim Museum Bilbao, the exhibit will be rounded out by a section called Didaktika, which will give visitors the opportunity to learn more about a key theme in Wright’s life and career: Education. Texts, photographs, audio files, specific bibliography, audiovisual materials and various workshops will reveal the education Wright received from his family and from the architect Louis Sullivan, which had a decisive influence on his career, as well as the education he promoted through his school at Taliesin.

In conjunction with the Frank Lloyd Wright exhibition, the Guggenheim Museum Bilbao will offer a series of educational activities to help visitors gain a better understanding of the architect and his work. These include a Film Cycle on his life and work (from October 26 to November 1, 7:30 pm) and an Architecture Conference that will examine different aspects of Frank Lloyd Wright’s work and the field of architectural design from a contemporary and multidisciplinary perspective (January 2010). Finally, in December and January various workshops will introduce our youngest visitors to the basic concepts of architecture and of the exhibition itself.

Frank Lloyd Wright is the largest and most comprehensive exhibition on this American architect of the many that have been held in Europe to date.

63 of the noted architect's visionary designs are represented in nearly 200 original drawings, historical and new scale models, digital animations and other contents displayed in Frank Gehry's iconic building.
A singular exhibition layout reveals how the famous architect revolutionized the concept of space by designing "from within outward".

Guggenheim Museum Bilbao
Avenida Abandoibarra, 2 48001 Bilbao Spain
Tuesday to Sunday: from 10 am to 08 pm
Monday closed.
The Museum will be closed on December 25 and January 1. On December 24 and 31 the Museum will close at 5 pm.