Mise-en-scene presents a serie of works by two artists. Authors of visual theatres distinguished by parody, they create carefully composed, eye-catching settings as background of their photographic works. Provocateurs, they use visual pun, farce and camouflage to throw on the scene an ironic outlook on life. Curated by Monica Piccioni. 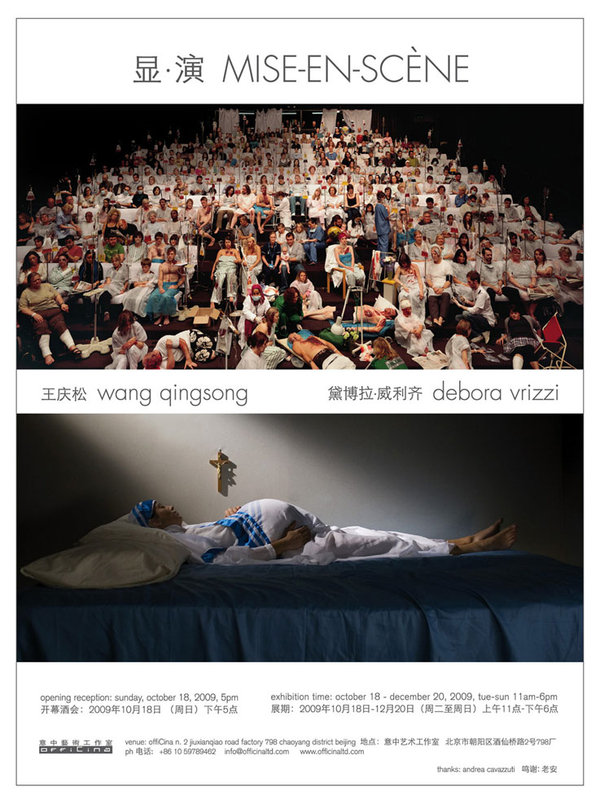 This exhibition on view at offiCina from October 18, 2009 is a two-person show featuring works of artists Debora Vrizzi and Wang Qingsong. Authors of visual theatres distinguished by parody, they create carefully composed, eye-catching settings as background of their photographic works. Provocateurs, they use visual pun, farce and camouflage to throw on the scene an ironic outlook on life.

Mise-en-scène literally means ‘staging’ and refers to the whole process of the arrangement of a scene for a theatrical production or movie involving direction, costumes, make up, facial expression, props, lighting etc. Stemming from the theatre, it also conjures up that part of cinematic process that takes place on the set, as opposed to montage, which takes place afterwards.

The visual composition of a scene requires a long process of preparation, the relation of people, objects and the construction of a physical environment for the action. This aspect confers to these artists’ works a texture, a substance that lacks in computer assembled pieces. But their final work and the process of making it is even more important as it questions the nature and relationship between performance, motion picture and the still image. Located on the crossway between different media, these elaborate tableaux vivants (or “animated pictures”) display a likewise sophisticate relation between image, time and perception. However, in this exhibition we do not only view a comparable approach to photography but we are also presented with diverse solutions and aesthetics that light up an individual conceptual process. And also each of the artists reveals the ability to synthesize and draw from different languages creating a personal iconography.

Graduated from the Sichuan Academy of Fine Arts, Wang Qingsong is internationally known for elaborate, allegorical scenes that mimic consumerism and use popular motifs of both western and eastern cultures. Commenting on the massive changes and the effects of globalization happening in China, his ironic photographs hover provocatively between fiction and reality. Parodying the Chinese miracle, the artist interprets the feeling of that silent majority who mainly suffers from the ‘side effects’ in a society that has changed too quickly. The appeal of his work -in our opinion- derives mainly from the visual power of the composition, a boundless wealth of imagery and his spatial sensibility.

Over the past few years, his productions have become increasingly ambitious, the field of composition has enlarged to involve more people, assistants and technicians, an array of lights, make-up and wardrobe and more sophisticated props. In a context where everything is hurried and fast, Wang Qingsong engages in projects that require time and interaction. By creating microcosms, it seems that the artist invites spectators to stop and decode the multiple small stories told in the whole epic. Time is important for everybody. Making these works and viewing them requires time. His portraits are animated with narratives, stories and people fixed in the photographic pose. In a photograph every little detail matters and Wang Qingsong’s large-scale pictures have the rare quality to hold the gaze of viewers inviting them to gradually explore the scene, to catch the manifold poses, the single episodes.

Exhibited this year at the Guangzhou Photo Biennial, Temporary Ward (2008) is shown in Beijing for the first time. The piece was created in Newcastle where the artist went on a residency invited by Northern Stage to respond to the newly redeveloped theatre building. During his stay in England, he got inspiration from the notion of theatre as a cathartic experience for audiences. The location was the starting point to explore the subject of pain and healing (an investigation he had already in mind) juxtaposing the physical treatment that people receive in hospitals to the emotional healing associated to theatre, art and culture. 300 local volunteers were invited to take part in a photographic shoot at Northern Stage and transmitted live onto screens throughout the theatre.

The image took several days to set-up and a full day to shoot. The making process included finding hundreds of doctor and nurse outfits, qualified make up artists, recruiting volunteers and plenty more to be arranged from the big logistics down to tiny details. When confronting with Wang Qingsong’s works, we may argue that creating large-scale productions is easier and cheaper in China but in this piece -produced from collaboration abroad- more significant is the enthusiastic answer of volunteers. As documented on the Theatre’s blog, almost 600 people from Edinburgh to London, some as young as 3 months, others as 76, applied to take part in the project.

Here it is delineated a more complex relationship between the spectacle and the spectator. The human group participates to a theatralization of pain where the audience is transformed into a live crowd waiting to be healed, or perhaps in an auditorium waiting for a performance to begin. Within the living picture the artist seats in the center reading a paper, waiting just like the others do. During the years, Wang Qingsong’s role in his photographs has shifted from observer to participant and between different scenarios. Here his appearance seems to allude to a sort of director signature (reminding us of Alfred Hitchcock cameos) claiming the author/subject liaison.

Responding to the question whether his compositions were computer fabricated or not, in 2003 the artist started shooting his ‘the making of’ documentaries. These documents are very interesting to catch up the atmosphere where his work is born and provide a behind the scenes of the human interactions. Therefore, we decided to present in the exhibition a video footage (edited by Andrea Cavazzuti) giving viewers a taste at the goings on during the artist’s process of creation.

Unlike Wang Qingsong, Debora Vrizzi is virtually the only performer inside the scene as she mostly uses herself as filter between the viewer and the notions explored in each piece. A graduate of Rome Centro Sperimentale di Fotografia, this young Italian artist combines her activity as visual artist (performance, video, photography) to her work as director of photography for films. In Vrizzi’s work, the setting provides the background to a chameleonic role-play where parody restages myths, iconic characters, fairy-tales and motifs of 15th - 16th century iconography. There is a carnival dimension in her work that fascinates as it mocks stereotypes, questions the game of social identity and subverts the general accepted image.

In her project “Un-Happy Ending” (2007), the artist stages and interprets through photo and video the moment of death (often violent) of eight historical female characters: Lady Diana (1997), Francesca Woodman (1981), Mother Theresa (1997), Marie Antoinette (1793), Marilyn Monroe (1962), Mata Hari (1917), Nico (1988), Sissi (1898). Vrizzi represents them in a theatrical and pictorial way, carefully paying attention to costumes and lighting. Then she adjusts on the scene some elements that decode the psychology of the historical character and stand out as witty remarks. The dress of Marie Antoinette covers the background like a peacock tail. The bandage on her eyes shows the impossibility to see the crude facts. Marilyn’s lying on a single bed represents the woman’s intimate void and despair.

These portraits are represented in the moment of transition from life to death, which coincides with the characters transformation into pop icons. Fascinated by the ambiguity and fairy tale format of news about these historical figures, the artist depicts them as princesses whose immortality passes through the unlucky circumstances of their deaths. The fatal moment coincides with the birth of a myth.
The narrative occurs in a moment of eternal suspension between a ‘before’ and a ‘after' - elliptical moments - and an eerie state on the border between death, dream and sleep enhanced by the sense of light, the voice over, the poses and the slow exploration by the camera. Such suspension and ambiguous dimension extends to the formal level with the work developing on the boundary between cinema/video/photography.

The photographs in the project are not stills taken from video but (a choice consistent to her research) shots taken on the setting from different angles. Referring to the video piece, Bruno Di Marino argues that the eight portraits “on one hand are photographic portraits, en pose subjects; on the other hand they belong to the realm of images in movement” and that “on the borderline among pictorial, photographic and movie representation, Vrizzi seems to match the punctum temporis mentioned by Gombrich, that is the most meaningful instant of an event that the artist chooses to represent on the canvas as well as the punctum mentioned by Barthes in his essay Camera Lucida: ‘plus-value’ given by the viewer in front of a photograph.

Different from what happens with watching movies, those who look at a photographic image have enough time to intervene and integrate with their own glance, to isolate a detail, adding in the end a ‘surplus’, something though that has always been inside the picture... Through this kind of three-dimensional moving frames, Vrizzi allows us to reflect in real time. She gives us all the time we need, exactly as we were in front of a photograph.” (Segno Cinema, May-June 2008). Her research on the opposite yet related concepts of stillness and motion continues in other works (Frame Line, 2008) exploring the formal and conceptual implications of cinematic frame.

Wang Qingsong and Debora Vrizzi will be present at the opening.