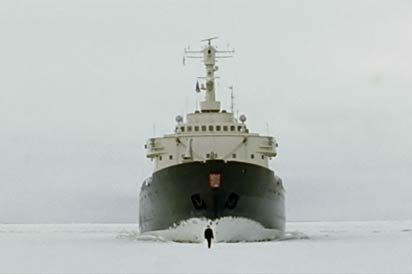 Greenland, Spitsbergen, Siberia, Antarctica… These names bring to mind cold, ice, and explorers in distress. Jean-Baptiste Charcot, who had crossed the polar seas, was afflicted with a condition which, despite his medical training, he could not readily diagnose. "What is the origin of this strange attraction," he wrote, "for the polar regions, which are so powerful, so tenacious that, upon return home, one forgets one's moral and physical fatigue, and dreams only of going back?"

Lands imbued with visions of freedom, where human imagination knows no bounds; arid zones in which humans can only survive; "virgin" territories; and symbols of devastation caused by human activity across the globe: through testimonies, stories, maps, and documentaries which have dotted their discovery and exploration, the poles have become a paradoxical object whose "reality" is informed as much by collective imagination as by scientific, geographical, and ethnological data. The polar regions are a hostile territory in which man confronts his own depths, his own greatness as well as his own insignificance.

In our society, where everything and everyone has its place; where time, light, and space have been quantified and turned into marketable commodities, the endless horizon of the poles continues to fascinate and present the ultimate refuge for beautiful utopias, for our fathers' "values", now irretrievably lost. The polar regions are also among the last where human effort and capacity to surpass oneself take on their full meaning; where primitive impulse, which lies dormant in each of us, up-ends the security of our comfort and our habits.

These antithetical motivations, where romanticism and ecological considerations dominate, are undoubtedly tied up with the current artistic infatuation with these endangered regions. The works presented in this exhibition oscillate between two alternatives, sometimes opposing and sometimes complementary: a sense of profound confusion before the changing world and a yearning for adventurous exoticism. Whether they take on the form of a personal diary, a travelogue, or a documentary; whether they represent a physical, symbolical or scientific exploration, the artworks comprise a network of images, sounds, and words which combine initiatory journeys and social utopias, and in which being becomes once again human.

This exhibition is a fruit of extensive reading: novels, essays, explorers' journals. Its title has been intended partly as an homage to Emmanuel Hussenet's and Michel Onfray's captivating reflections on the high latitudes.

The Fonds régional d'art contemporain de Lorraine, a member of "Platform" network, enjoys financial backing from the Lorraine Regional Council and the Lorraine Region Cultural Affairs Department (DRAC) at the Ministry of Culture and Communication.