A new work based on the ETV Collection of propaganda films 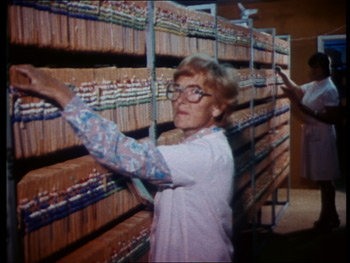 The first solo London exhibition of celebrated Lithuanian artist Deimantas Narkevičius brings together Into the Unknown, a new BFI commission based on the BFI National Archive’s ETV Collection of socialist propaganda films, and the award-winning The Dud Effect, 2008.

Better known for his exploration of different narrative structures through film and video Narkevičius’ films examine the perception of historical memory, which can be modified by ideologies and utopias, revealing how memory is subjective and the moving image can deceive. To coincide with the 20 years anniversary of the Fall of the Berlin Wall, we have commissioned Narkevičius to create a new work based on the ETV Collection of propaganda films, the largest of its kind surviving in Western Europe.

Throughout last year the artist has explored the Collection, concentrating particularly on documentary films from East and Central Europe in order to create Into the Unknown, a film edited out of existing, politically motivated found footage originally made to promote the socialist way of living. The material selected depict every day life of East Berliners documented during the GDR (German Democratic Republic) period, the new work exposing the individuals’ place into strict social systems. By re-editing different clips of existing films and mixing up sound, the artist’s intention was to bring back a certain existential weight to the cinematic representations of socialist archetypical figures. Old workers, young pupils, concerned doctors and nurses are just fragile human beings, vulnerable to the flow of time. The same flow of time which made the political system they were living in fade away two decades ago. Some of the people documented in the footage are still alive and yet the social visual canon they are representing today only exists in the films produced by the DEFA (the GDR Film Corporation). Into the Unknown allows us to reflect on an ephemeral style of image making which is gone and whether this applies only to the system of state socialism.

Into the Unknown is presented alongside the UK premiere of the award-winning The Dud Effect. This work is set on a deserted former Soviet missile base in Lithuania, where during the Cold War category R12 nuclear missiles were stationed aiming at the West. The film combines archive photo material with new shoots of the now semi-decrepit missile base and its enormous underground catacombs. The protagonist is Evgeny Terentiev, a former officer who served at a military base in Lithuania, like the one shown in the film. In the work he demonstrates the firing of an R12 nuclear missile, following the exact sequence of commands as he recalls it; this, together with the detailed exploration of the site’s landscape and the remains of the missile base, allows the artist to show the psychological perception and consternation at the extent of the destruction that could have been possible.

Into the Unknown is a commission by the BFI and Hartware MedienKunstVerein, Dortmund with support from Kunststiftung NRW.
The exhibition is supported by The Henry Moore Foundation and by Arts Council England.

Deimantas Narkevičius in Conversation
We welcome the artist into conversation with Elisabetta Fabrizi, BFI Head of Exhibitions, to discuss the development of his work and his new Gallery commission, which draws on research undertaken in the BFI National Archive.
Thu 1 Oct 18:10 Studio

The King of Communism: The Pomp and Pageantry of Nicole Ceausescu + Q&A with Ben Lewis
Re-imagining Communism as one giant artwork, and using propaganda films from Ceausescu’s own archive, Lewis concentrates on the cast of the ‘show’, the poets, playwrights, choreographers, directors, scene painters, dancers and extras who appeared in Ceausescu – the Gesamtkunstwerk.
Tue 24 Nov 20:30 NFT3