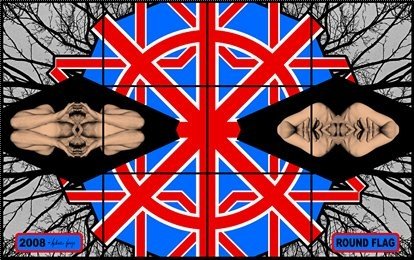 "The Jack Freak Pictures are amongst the most iconic, philosophically astute and visually violent works that Gilbert & George have ever created..."
- Michael Bracewell

Galerie Thaddaeus Ropac is pleased to announce its upcoming exhibition of the most extensive group of pictures produced by Gilbert & George to date. In the Jack Freak Pictures Gilbert & George continue to portray life and the cityscape as experienced by the archetypal modern man and to delineate the morals of human existence, from the profound to the rudimentary. The iconic red, white and blue design of the Union flag is pivotal in these pictures with individual connotations for each viewer; its ambiguity incites a multiplicity of interpretations.

The pictures are also punctuated by a collection of recurring elements, including trees, street maps and brickworks, found within reach of their East London studio and in any urban environment. The medals that appear within these pictures, whether homogenous commemorative emblems or personalized decorations, provide their own narrative, accentuating occasions of pride or patriotism and acting as a counterbalance to the potential relentlessness of everyday life. The Union flag design is intermixed with circles and rosette motifs, which underpin and consolidate the art, arranged and rearranged to create a complex and vivid visual language of the past, present and future.

As in all of their art, the artists themselves are again protagonists; vehicles to hint at future contemporary life, both from a spiritual and material point of view. They are depicted expressionless and 'expressionful' as the embodiment of normality, in perpetual progression towards an inevitable fate, perhaps simply a commentary on man's mortality.

The title of the Jack Freak Pictures possibly refers to the provocative and heady existence that modern man is subject to, at once vulnerable to the uncertainties ingrained in modern society as well as the progressive fusion of the ideas of national and personal identity. The prevailing interpretation of the Union flag is inverted when juxtaposed with the word freak, generally associated with social ostracism.

Gilbert - born in 1943 in the Dolomites, Italy - and George - born in 1942 in Devon, England - both studied art before they met in 1967 at Saint Martin's School of Art in London. At the end-of-year-show, the Snow Show, Gilbert and George created their first art as a joint effort, far removed from the formalist criteria of the art taught. In 1969, they created their first Singing and Living Sculptures, in which they are both subject and object of their art - refusing to disassociate their art from their everyday lives. They appeared in museums and galleries as "living sculptures", including their famous Underneath the Arches. The pictures dating from 1971 are the first grid-arrangements, which would henceforth become their formal signature. In the 1980s their imagery becomes more complex, incorporating endless levels of meaning - from the symbolic and allegorical to the overtly sexual, religious, political and personal.
Gilbert & George have worked as one artist for over 40 years and produced more than 2000 artworks.

Their first retrospective exhibition took place at the Stedelijk Van Abbemuseum in Eindhoven showing their pictures of 1971-80. The Musée d'art moderne de la ville de Paris in 1997 hosted a major retrospective exhibition of their art. The most recent and extensive survey of Gilbert & George's art was organised by Tate Modern in London in 2007 and toured to Munich, Turin and three venues in the United States. In 2005, Gilbert & George represented Great Britain at the Venice Biennale. And very recently, they have been made Honorary Professor of Philosophy by London Metropolitan University.

A fully illustrated catalogue with an essay by novelist and cultural critic, Michael Bracewell