Dispatch. Lydda Airport is a short film which takes place at the eponymous location sometime in the mid to late 1930's. Photographs and the brochure of the artist's project stazione, created for the 53rd Venice Biennale, 2009, will also be exhibited. 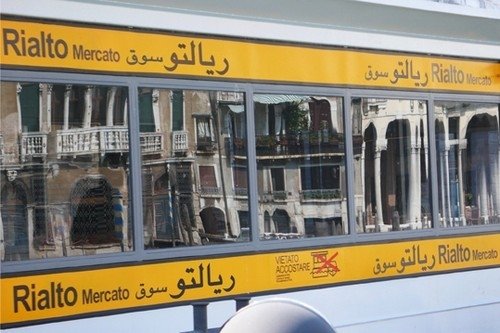 Alexander and Bonin is pleased to announce dispatch, Emily Jacir’s second one person exhibition at the gallery. The exhibition will present works from two recent projects, Lydda Airport and stazione.

Lydda Airport is a short film which takes place at the eponymous location sometime in the mid to late 1930’s. Built in 1936 by the British, Lydda Airport was an important stop along the “Empire Route” for their national airline, Imperial Airways. Until 1939 it was the world’s largest aerodrome. Central to the film’s narrative is Hannibal, one of eight planes which made up the Handley Page fleet; the largest passenger planes in the world at that time. Hannibal mysteriously disappeared in 1940 somewhere over the Gulf of Oman en route to Sharjah.

The film was also inspired by Edmond Tamari, a transport company employee from Jaffa, who received a communication that he should take a bouquet of flowers to Lydda Airport and wait for the arrival of Amelia Earhart in order to welcome her to Palestine. She never arrived. On July 11, 1948 Lydda Airport was captured by the Israeli Defense Forces and renamed Lod International Airport. In 1974 the airport was renamed Ben Gurion International Airport. Lydda Airport was commissioned by the Pick Laudati Fund for Arts Computing at Northwestern University where the artist was in residence in 2008. The installation also includes a sculpture developed by Jacir whilst editing the film at Civitella Ranieri.

Photographs and the brochure of the artist’s project stazione, created for the 53rd Venice Biennale, 2009, will also be exhibited. stazione was a public project which was to have been situated on each of the 24 vaporetti stops along route #1 of the water bus route, beginning at the Lido stop and ending at Piazzale Roma. Jacir translated the names of each station into Arabic and planned to place the Arabic translations on all the stops next to their Italian counterparts thereby creating a bilingual transportation route through the city. The Arabic inscriptions were meant to place each floating platform in direct dialogue with the surrounding architecture and urban design, thereby linking them with various elements of Venice's shared heritage with the Arab world. The realization of stazione was unexpectedly cancelled without explanation by Venetian municipal authorities.

Emily Jacir lives and works in Ramallah and New York. Her work encompasses a diverse range of media and strategies including video, photography, social interventions, performance, writing and sound. She was awarded the Golden Lion for an artist under 40 at the 52nd Venice Biennale for her 2007 installation, Material for a film. This work was subsequently shown in Beirut under the auspices of Ashkal Alwan Home Works IV and at the Guggenheim Museum, New York in conjunction with Jacir’s receipt of the 2008 Hugo Boss Prize.