The Pedro Cabrita Reis' solo exhibition presents 60 sculptures, including paintings, drawings and photographs from 1985 to 2009, in a display that fills the entire basement floor of the Galerie der Gegenwart. 'Drawn with Light - Carl Blechen's Amalfi Sketchbook' presents the central piece from this Italian journey, that contains the artist's impressions of a 10-day walking tour along the Amalfi Coast in May 1829. 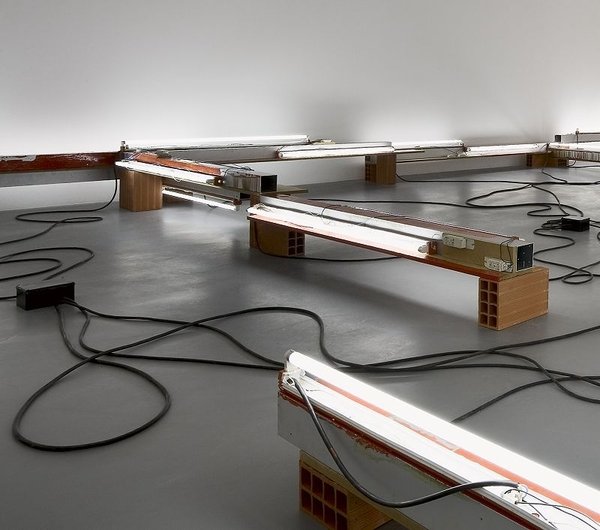 Pedro Cabrita Reis - One after another, a few silent steps
Curated by Sabrina van der Ley

Born in Lisbon in 1956, Pedro Cabrita Reis is one of the leading Portuguese artists of his generation. This exhibition will be his first presentation in a German museum since 1996. Cabrita Reis has exhibited widely and participated in numerous international exhibitions, including documenta IX in 1992; in 2003 he represented Portugal at the Venice Biennale. Currently, he is participating in the 10th Lyon Biennale with two large works. In the most comprehensive show by the artist to date, the Hamburger Kunsthalle is presenting around sixty sculptures, including several large-scale pieces, paintings, drawings and photographs from 1985 to 2009, in a display that fills the entire basement floor of the Galerie der Gegenwart.

Since the early 1990s, Cabrita Reis’s work has revolved around the themes of housing, habitation, construction and territory. Along with artworks based on elements of everyday life, such as tables and chairs or doors and windows, he often creates expansive installations that fill entire exhibition spaces with both complex and imposing structures. He counters the classic white cube with his use of massive brick walls, found objects and industrial materials such as neon tubes, steel girders or rough wooden planks.

Pedro Cabrita Reis is a keen collector, both of the flotsam of civilization and of sensory impressions. For him, discarded everyday objects are just as welcome finds as the panorama of an abandoned building site or an old olive tree. Like retinal afterimages, such visual stimuli plant the seed of an idea for one of his melancholic-archaic sculptures or for a new painting. In his work, Cabrita Reis repeatedly addresses fundamental issues of art; he explores the concepts of painting and sculpture and develops sculptural methods of drawing in space. While Cabrita Reis’s rugged walls and the cardboard sheds held together with adhesive tape might at first glance seem to refer to social realities outside the realm of art, they are not bound up with these realities, nor do they attempt to duplicate them; instead, they transform them into intriguing and sometimes quite literally opaque artworks. Wherever windows appear in Cabrita Reis’s installations, they are invariably blind, boarded up or painted over, the doors to his dwellings are inaccessible. Cidades Cegas (Blind Cities) is the title of a group of works whose stoically melancholic appearance alludes to the "homelessness” of man as a basic constant of the human condition – one of the leitmotifs in Cabrita Reis’s oeuvre.

In addition to works on loan from major museums and private collections, the exhibition features new works that have been developed especially for the Hamburger Kunsthalle presentation. After premiering in Hamburg, it will travel to the Musée Carré d’Art in Nîmes and the Museu Colecção Berardo in Lisbon. It is the first exhibition of the new curator of the Galerie der Gegenwart, Sabrina van der Ley, in the Hamburger Kunsthalle.

A comprehensive catalogue with 200 colour illustrations has been published to accompany the exhibition and features amongst other texts by António Lobo Antunes, Dieter Schwarz and Pedro Cabrita Reis. It is available from the museum shop.

Even among his contemporaries, Carl Blechen (1798–1840) was regarded as an exceptional artist. While his genius was admired, however, he also shocked the public with his explorations of new formal and thematic possibilities. Today he is internationally recognized as one of the leading artists of the 19th century. As a landscapist, Blechen was inspired by the subjects and themes of Romanticism, above all by the work of Caspar David Friedrich and Johan Christian Clausen Dahl. In terms of painterly style, however, he was far ahead of his time. Blechen’s art combined an early form of realistic perception with an innovative plein-air painting technique, which in this form was unparalleled in Europe at that time. With this particular combination he had neither direct artistic predecessors nor immediate successors.

From 1822 onwards, during an artistic career that lasted only around 15 years, Blechen created a unique body of work that can be compared to the art of William Turner. The high point of Blechen’s oeuvre is reached in the works made during his travels around Italy in 1828/29. In this exhibition, the Hamburger Kunsthalle presents the central piece from this Italian journey, which is also one of the most important works in Blechen’s entire output – the Amalfi sketchbook. It contains the artist’s impressions of a 10-day walking tour along the Amalfi Coast in May 1829, recorded in pencil, sepia and watercolour on 66 large-format sheets.

Blechen made a large number of landscape drawings around the hilltop villages of Amalfi, Ravello, Minuto and Scala, and also in the Mill Valley (Valle dei Mulini) behind Amalfi. Although rapidly executed, these sketches nevertheless capture the moment with impressive precision. Rather than produce the veduta-style images that were fashionable at the time, Blechen based his drawings upon his direct sensory experience and focused on manifestations of light, shadow and atmosphere. Viewed in their entirety, the sheets reveal the complexity and technical variety of Blechen’s sketchbook, his mastery of pencil, pen and brush technique and the artistic principles to which he adhered.

This exhibition has been organised by the Akademie der Künste, Berlin and the Hamburger Kunsthalle