Fri-sun 1-6pm and by appointment

The exhibition introduces a group of works by the three artists that are concerned with the idea of portraiture as a means of capturing a moment in time as well as with the affective relationality inherent in any process of representation: a relational set of esthetic, discoursive and social interactions. Curated by Rike Frank. 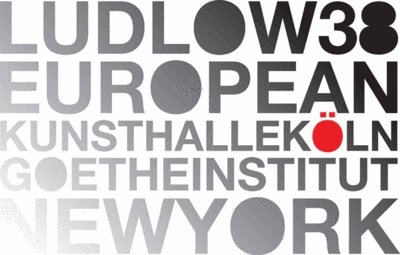 The second exhibition programmed by the European Kunsthalle introduces a group of works that are concerned with the idea of portraiture as a means of capturing a moment in time as well as with the affective relationality inherent in any process of representation: a relational set of esthetic, discoursive and social interactions. In her silent film portraits Friedl Kubelka reinforces, with small gestures, the tension between herself as the filmmaker behind the camera and the subject being portrayed. Ricardo Basbaum also chronicles visible and invisible relations in diagrams depicting relations between 'You' and 'Me' as dynamic patterns of a 'collective heterogenesis.' The photographic work of Gerard Byrne, on the other hand, portrays a specific moment in the ever-changing display of a typical magazine newsstand and thus the interrelationship of time, representation and us, the viewers.

Friedl Kubelka (= vom Grőller, Vienna, born 1946 in London) is perhaps best known for her serial photographs (the Year's, Month's, Week's and Day's portraits) and as the founder of the Vienna School of Artistic Photography and Independent Film. In the late 1960s she began to shoot portrait films: asking her models to look into the camera for the duration of one reel of film. These silent black-and-white films are edited in the camera only, and therefore convey an intensity and intimacy stemming from the shooting process and the tension that builds between Kubelka and those portrayed. 'I want to see something that has never before been seen in this form.' She explores the human psyche with both humour and shame, also giving the subject of aging rare visibility.

Gerard Byrne (Dublin, born 1969) repeatedly uses newspapers and magazines as motifs and sources for his work. 'They evidence aspirations and self-identities, all offered within the pluralism of the capitalist newsstand.' At Ludlow 38 he shows a work from an ongoing series of black-and-white photographic prints dedicated to this subject, which also interested photographers such as Walker Evans and John Vacheron. Byrne uses the newsstand as a temporal index: a moment in time portrayed in headlines and covers and reflecting on how the media industry's representations form our sense of the present. The title remains unfixed. 'One year, nine months, three weeks and one day ago' denotes the time elapsed between the shooting and the display of the image. Only one print is made from each negative, and the temporal relationship between the image and the date it chronicles therefore becomes materially inscribed in the photograph.

Ricardo Basbaum (São Paulo, born 1961) is known as an artist, curator and writer. His theoretical and philosophical research focuses on the concept of the 'organic line,' as developed by Brazilian artist Lygia Clarke. Her interest in the 'continuity between artwork and real world' finds its correspondences in Basbaum's art practice, which takes the form of installations, spatial interventions, drawings and conversational pieces extending over several years and continents. The wall diagram at Ludlow 38 is part of the ongoing Me–You series. On a monochrome background a relational map of lines and words sketches heterogeneous encounters and time zones with feedback loops. 'A diagram is conceived of as a surface which triggers thinking processes, narratives, histories, stories. In that sense, if you let yourself be captured by its lines and words, you will be taken elsewhere – and when you get back, you won't be the same; such is the promise articulated in transformational processes.'

Me–You Choreographies, Games and Exercises takes the form of a group dynamics proposal where two sets of shirts are distributed to participants: red shirts with the word 'ME' and yellow shirts with the word 'YOU.' The two groups perform a set of instructions corresponding to diagrams and/or proposals developed on the spot, in relation to the group of people involved and the architecture of the site. The proposal is referred as 'group specific' or 'person specific,' since results vary according to the group of participants who take part in the process. The workshop includes the screening of the video works Me–You (Shanghai Biennale) (11'39, 2008) and eu–vocé (ipatinga) (11'12, 2009).