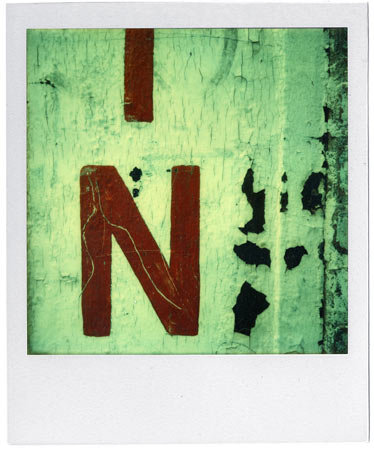 Early last year, the Polaroid Corporation ceased producing its iconic film. The 9th October 2009 will see the final "Use by" or Expiration date of the last batch of Polaroid film manufactured. The exhibition at Atlas will feature a wide selection of Polaroid prints by photographers who have either worked directly with the Polaroid Corporation as part of their research program or who have become famous for the quality of their Polaroid prints either alongside or independent from their traditional camera-based work. It will thus trace the development and use of this unique medium up to the present day. The opening reception will coincide with Polaroid film's final date of expiration.

The Polaroid or 'one-step photography' was invented by Edwin H. Land, founder of the Polaroid Corporation, in 1947. Land believed from the beginning that artistic inquiry was a critical element in the exploration of Polaroid products, recognising the importance of photographers experimenting with the medium to push Polaroid film to its limits. Land met Ansel Adams in 1948 and he became the first of several artist consultants hired to test the cameras and films. Adams wrote of Polaroid, "I think it promises to be one of the greatest steps in the development of photography".

In the 1950s and 1960s, Land commissioned additional artists and young photographers. Some artists experimented with the medium, using the print as a blank canvas to manipulate and further enrich. In the 1960s, Lucas Samaras embellished his Polaroid self-portraits with designs in ink and paint. When Polaroid introduced the revolutionary SX-70 camera system in 1972, Samaras pushed the emerging dyes with a stylus to create malformed versions of himself.

Over a period of six decades, Land's invention captured the imaginations of artists from Ansel Adams to Andy Warhol and shaped the careers of many others, notably Robert Mapplethorpe. Jeff Rosenheim, photographs curator at the Metropolitan Museum of Art, NYC, credited the Polaroid SX-70 camera and instant film, which debuted in 1972, with allowing an aging, infirm Walker Evans to continue taking pictures. "He couldn't hold a heavy stand camera, but he could work an SX-70" says Rosenheim of Evans, who died in 1975. Evans' Polaroids, he adds, are "a recapitulation of his whole career in photography. It was his last major body of work". This is also true of André Kertesz, who after the loss of his wife Elizabeth was emotionally and physically exhausted. His remarkable recovery began when he was compelled to buy a small glass bust, which he began to photograph in his apartment, using a Polaroid SX-70 camera enabling him to work quickly and autonomously. The immediacy and intimacy of the Polaroid process afforded Kertesz the opportunity to explore a rawness of feeling in which he otherwise might not have engaged, which lead to an important body of work at the very end of his life.

From the outset, the Polaroid was an integral part of fashion photography, adopted as a proofing device for composition and exposure. As photographers like David Bailey and Helmut Newton became celebrated internationally and embraced by the art world, their Polaroids were transformed from throw away test prints to highly sought after works of art, revered for being the first formulation of the photographer's concept. Helmut Newton's 'Pola Woman' (1992) was a landmark publication demonstrating the Polaroid's higher status. A number of images in this book will be included in the exhibition. Newton wrote in the introduction "...why is it that the first Polaroids often contain a freshness and spontaneity that is lacking in the carefully planned final shots on what I call 'real film'?"

The exhibition will also feature special commissioned works by Contemporary artist Marc Quinn, legendary Pop artist Peter Blake, and iconic Magnum photographer Elliott Erwitt. Quinn wrote of this experience: "What I like about Polaroid's is that they are like a sculpture of a photograph. In other words, when you press the button, the Polaroid comes out of the camera, and image is transformed into an object" (May, 2009).